“I joined the League and hit a home run,” Jillian Mariutti recently told a friend.

Ms. Mariutti, 36, a senior director on the debt and equity financing team at JLL Capital Markets in New York, was not bragging about hitting a ball over a distant wall, but rather, about the good fortune she had in meeting David Nieder on the dating app the League in December 2018.

Ms. Mariutti met Mr. Nieder 11 days after sending a warm letter to the North Pole, while visiting Santa with her niece at Macy’s on 34th street in Manhattan. The letter read in part: “I’d like to meet someone who loves me more than life itself, and for me to feel the same exact way about him — I’m asking for that once-in-a-lifetime kind of love.”

She got her answer, she said, in Mr. Nieder, 41, a senior vice president in credit at Blackstone in New York.

As for Mr. Nieder, a veteran of the League, Ms. Mariutti was too good to be true.

“I was on the dating app longer than Jillian, and noticed that a lot of people misrepresented themselves, especially with photos,” Mr. Nieder said. “Jillian looked so beautiful in her photo, I thought it was fake.

“I was happy and calm,” she said, “because I knew true love was on the way.”

Within a week, they were meeting for a first date at a Manhattan restaurant.

“This was pre-Covid, and the place was packed,” Mr. Nieder recalled. “As I was trying to find Jillian, I thought that both of us standing all night would not make for a very enjoyable first date.” 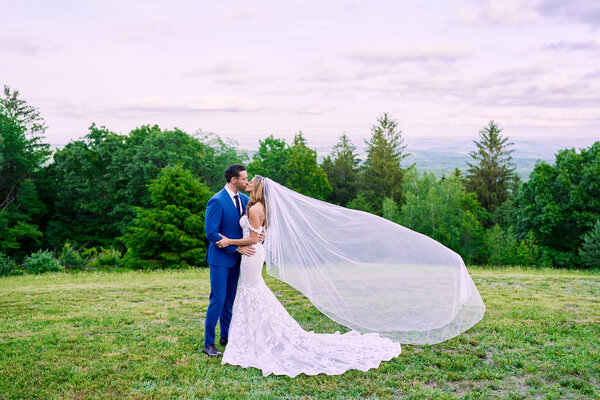 He then spotted Ms. Mariutti, who happened to be in the company of two empty chairs. “She got there a few minutes early and saved those chairs,” Mr. Nieder said. “I knew we were in for a great start.”

They began chatting, and Mr. Nieder learned that Ms. Mariutti grew up in Philadelphia and moved to Manhattan in 2007. She also told him that she had been in a long-term relationship that had ended earlier in the year.

Mr. Nieder told Ms. Mariutti that he was born and raised on Long Island, in Syosset, and later graduated from Binghamton University with a double major in finance and marketing in 2002, when he was a member of the Binghamton’s track and field team, competing in the 400 and 800 meters.

Though they had many things in common — such as a love of food, travel and the beach — religion was not one of them.

They cleared that hurdle with ease, but each would face a more difficult one in the ensuing years.

In the fall of 2019, Mr. Nieder was diagnosed with diverticulosis — a condition in which small, bulging pouches develop in the digestive tract — and was treated and fully recovered shortly thereafter.

In August 2020, eight months after the couple got engaged, Ms. Mariutti began suffering from a series of migraine headaches.

While she didn’t give the situation her full attention, Mr. Nieder insisted that she be examined by doctors who discovered an abnormal connection between arteries and veins in her brain that could potentially rupture — a condition known as arteriovenous malformation. Ms. Mariutti needed a one-time use of radiation to restore her to good health.

“David saved my life,” she said, “because that thing could have ruptured at any time.”