Home » Beauty and Fashion » An Argument for Loving ‘Devil’s Advocate’

An Argument for Loving ‘Devil’s Advocate’

A steak dinner prepared at the Jersey City, N.J., apartment of Louis Keleher may or may not have been the first date he had with Samantha McCluskey.

“She’s the only woman I made a steak dinner for in my life, so I always considered it a date,” he said. “She will tell you that she came over as friends.”

Actually, she also says that the dinner on Feb. 23, 2018 was probably a first date, but a difference of interpretation might come naturally to the two, who met in law school at Rutgers. She is now a deputy attorney general in New Jersey, working as a prosecutor in the office of public integrity and accountability; he is a defense lawyer and an associate in the law office Peter W. Till in Springfield, N.J.

They are, in other words, at work on opposite sides of the bar. But both view that as a strength in their relationship.

“When you get advice from someone who truly sees it from another perspective, it can be helpful,” said Mr. Keleher, 29, who also received a bachelor’s degree from Rutgers. “She’ll very candidly tell me, ‘That’s a stupid argument,’ or ‘That’s a decent argument that I might have a hard time fighting.’ To be on such different ends of the spectrum is quite unique, and it can make for interesting conversations.”

The couple first got to know each other in a criminal law class when he was in the second year of law school and she was in her final year. Their professor took attendance by laying out name cards for students, and tallied those absent whose cards weren’t retrieved.

Mr. Keleher made an opportunity of the system.

“When I would get my name card, I would also get her name card,” he said. “It was just whoever I was friends with. It also made it seem not as an obvious play. It would have been a little weird if I had only been getting hers.”

“Sam is so beautiful that I didn’t think she’d be interested in me,” Mr. Keleher said. “I was trying my best to make my best impression.” 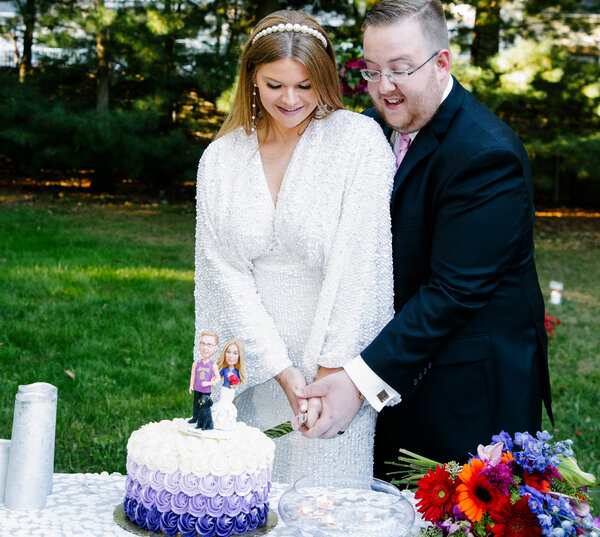 The following spring, when Rutgers participated in an annual charity softball tournament for law students at the University of Virginia, the two got to know each other better. The steak dinner — broccoli was also on the menu — that was probably their first date followed. The two shared a first kiss on the night she graduated.

“He’s one of the funniest people I know — I think that’s what attracted me to him first,” Ms. McCluskey said. “He’s very confident in himself, very smart but very humble. He’s a really good guy.”

In the months that followed, while she studied for the bar exam and he was living on the Jersey Shore and working, they fell in love.

“She’s stunning, by far the prettiest girl I’ve ever seen in my life,” Mr. Keleher said. “She has a really good moral compass, and we have very similar life views and life goals.”

On Oct. 3, the couple was married at the house in Freehold, N.J., that they expect to buy. The bride’s sister, Taylor N. McCluskey, officiated, having been ordained through Open Ministry for the event.

The divergence in their professional careers ultimately matters not so much to the couple, as their common goals are aligned.

“We’re really on the same page for what we want for our future,” said Ms. McCluskey, who will take her husband’s name. “He’s been my rock forever.”