Stella Tennant, the unimpeachably aristocratic model and inspiration to designers like Karl Lagerfeld and Gianni Versace, died suddenly on Tuesday, five days after her 50th birthday.

Her death was announced in a statement by her family. The cause of death was not given. Police reports noted no suspicious circumstances surrounding her death, according to the BBC.

The granddaughter of Andrew Cavendish, the 11th Duke of Devonshire and Deborah Cavendish, Duchess of Devonshire, the youngest of the Mitford sisters, Ms. Tennant was directly descended from Bess of Hardwick, builder of the opulent Elizabethan manor, Hardwick Hall, and once reputed to be the richest woman in England. 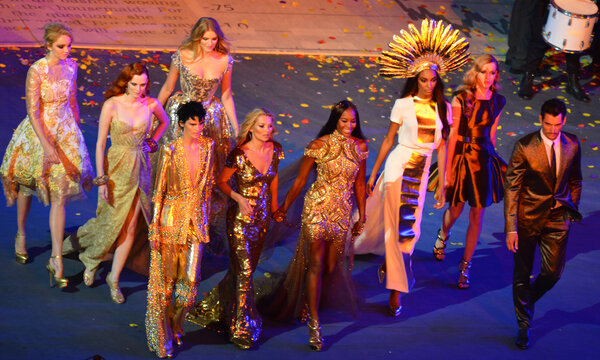 Ms. Tennant wore her rarefied heritage lightly throughout her three-decade run in fashion, during which she walked the runways for most major fashion designers; was featured in advertising campaigns for nearly every important label; appeared on scores of magazine covers; and worked with a full roster of the world’s elite photographers, editors, makeup artists and stylists.

Along with Naomi Campbell and Kate Moss, Ms. Tennant was chosen to represent English fashion at the closing ceremony of the 2012 Olympics. In the late 1990s, Karl Lagerfeld signed her to an exclusive contract as the face of Chanel. In doing so, Mr. Lagerfeld noted the very English Ms. Tennant’s likeness to the incomparably Gallic founder of the fabled house.

It was a fanciful assertion by any standard, given that Coco Chanel was short and better known for her style than her looks, while Ms. Tennant stood nearly six feet, had crisply regular features and retained into adulthood the “limpid blue eyes” her grandmother Deborah Devonshire first noted in a letter to the Anglo-Irish writer Patrick Leigh Fermor when Ms. Tennant was in diapers.

What the two women did have in common, though, was an element of androgyny. Ms. Tennant’s brushy haircut, along with her boyish cool (and a punk septum piercing), caught the attention of the photographer Steven Meisel in the early 1990s. After turning up at a casting call the photographer sent out for unknowns, Ms. Tennant found her face featured on the cover of Italian Vogue.

She soon found favor with designers across the spectrum, from New York indies to the renowned couturiers of Europe.

“Steven Meisel sent Stella for a go-see to my design studio, and I immediately cast her in my spring ’94 show as an aristocratic punk princess,” the designer Anna Sui said. “She was so elegant and had the prettiness and androgyny of an Elizabeth Peyton drawing. Plus, there was that posh accent and the defiance of the nose ring.”

Ms. Tennant’s offhand ease with duality — particularly of class and gender — kept her in demand throughout the decades with designers like Valentino Garavani, Alber Elbaz, Giorgio Armani, Marc Jacobs, Gianni Versace (whose family, in a statement on Tuesday, called her the late designer’s “muse”). If they admired her beauty, designers also banked on her ability to embody multiple fashion archetypes.

“She was equally beautiful in a tuxedo or a chiffon dress,” said Alber Elbaz, who cast Ms. Tennant to star in his first advertising campaign for Yves Saint Laurent when he assumed design responsibilities there in 1998 (and soon after Ms. Tennant gave birth to her first child).

“She was not really a model,” he added. “She was a woman, a mother, English, aristocratic but with a golden heart.”

Stella Tennant was born in London on Dec. 17, 1970, the youngest of three children of Lady Emma Cavendish and the Hon. Tobias William Tennant, son of the second Baron Glenconner, himself the younger half brother of Colin Tennant, the rakehell favorite of Princess Margaret and the force behind the development of the Caribbean island of Mustique.

Raised on her family’s 1,500-acre sheep farm in the Scottish Borders, she attended St. Leonards School in St. Andrews and later Marlborough College in the English countryside. She was still a student at Winchester School of Art when she caught the eye of the fashion writer Plum Sykes at British Vogue. When cast for a Steven Meisel shoot for a December 1993 Vogue UK issue titled “Anglo-Saxon Attitude,” she was already 23. Calculated in modeling business dog years that is almost retirement age.

Yet her detachment and relative maturity served her well in a business notorious for flightiness and helium-hit extravagances of temperament.

“As soon as anyone mentioned her name, the reaction was always “I want her to be in my show,” Mr. Elbaz said. Asked why, he replied, “At the moment when you are at your most crazed and panicked, she was the one calming you down.”

And, while she was no stranger to grandeur in attire (not every child, after all, is set free to play dress up in the wardrobes of Chatsworth, the Derbyshire seat of the dukes of Devonshire), she had an elegance of spirit and attitude that was innate, according to Pierpaolo Piccioli, the Valentino designer.

Just before the world went into lockdown last winter, Mr. Piccioli cast Ms. Tennant for the coveted opening spot in his couture show. It would prove to be her last.

“When she came for her fittings, she was so nice to everyone — not just me, but all the seamstresses, everyone,” Mr. Piccioli wrote in an email. “What she showed was that elegance is not just about physical attributes or a walk, but something inside. She had a grace that was impossible to copy or explain.”

She is survived by her husband, David Lasnet, a photographer and osteopath from whom she had separated in August after 21 years of marriage, and four children, Iris, Jasmine, Cecily and Marcel.