PRINCE Harry looks “tense” next to a “confident” Meghan Markle in a preview of their bombshell interview with Oprah Winfrey, a body language expert revealed.

The Duke and Duchess of Sussex were filmed holding hands in the garden of their £11m Santa Barbara mansion, as they spoke to the chat show giant. 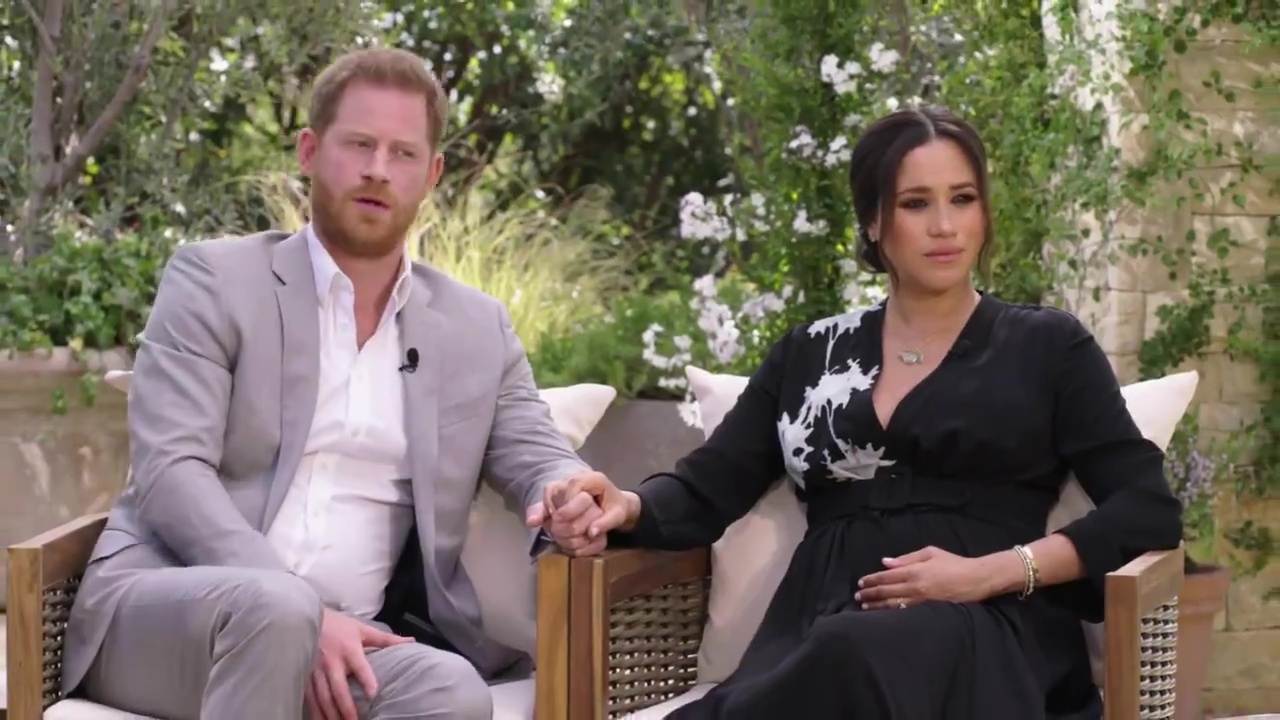 In the sneak preview, Oprah confirms that “there is no subject that is off limits", but body language guru Judi James said Meghan appeared totally unfazed by this.

Speaking to Fabulous, Judi said: “There is an interesting mirroring of both emotional state and confidence levels between Meghan and Oprah here, with Meghan sitting calmly upright, regally poised and elegant and looking very comfortable with the interview.

“She doesn’t look wary or defensive here or like a woman under pressure regarding any potentially killer questions.”

In contrast, Judi claims Harry “a lot less comfortable with this interview although he looks keen to talk”. 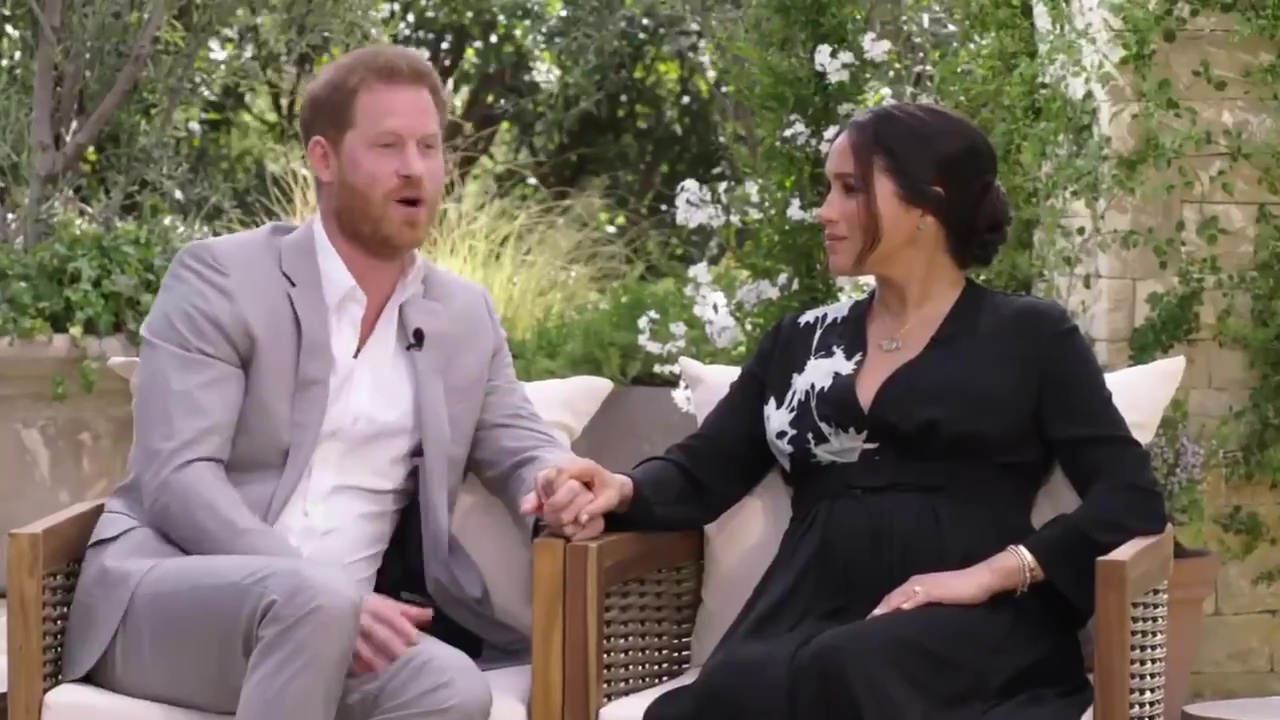 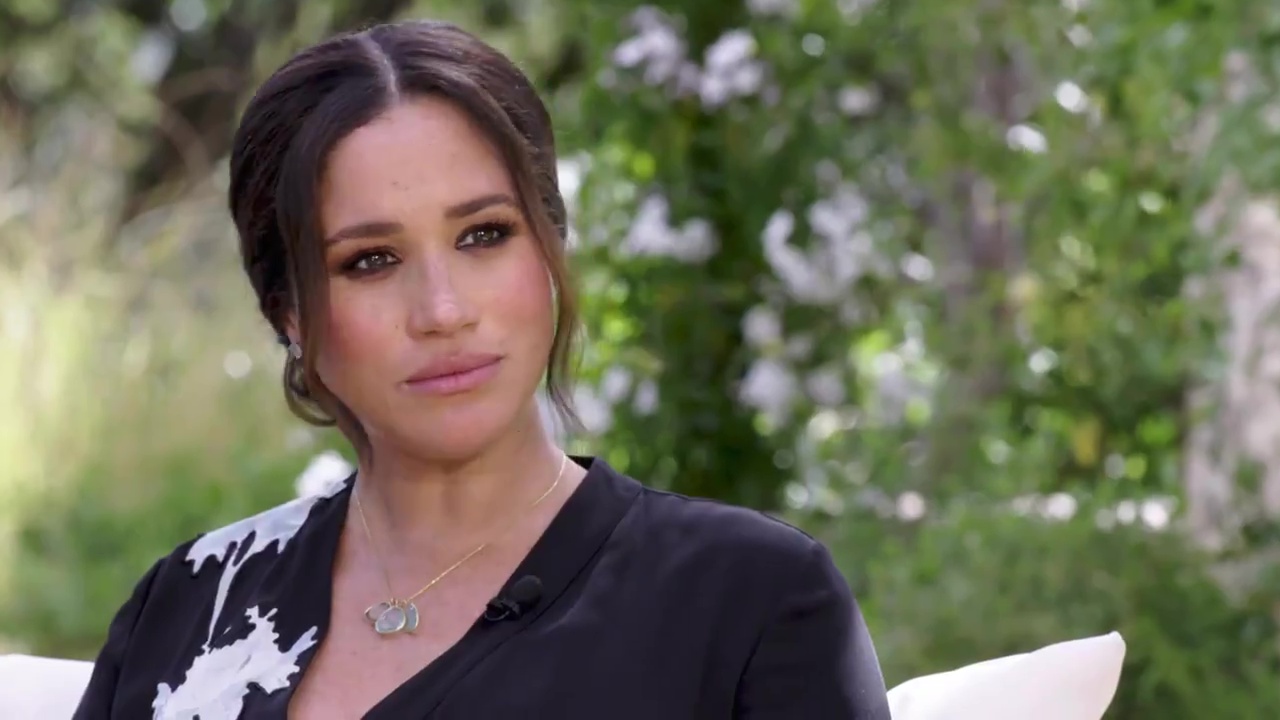 She explained: “His hand under his wife’s hand looks balled into a fist of tensions and his body pose looks rather awkward, stretched diagonally across his chair and with his legs crossed at the ankle.

“Harry’s ‘fig leaf’ hand pose looks very self-protective here. It could be a subconscious covering or barrier gesture with the crotch being covered by one hand.”

Judi said that pregnant Meghan’s body language towards Harry indicates she has a “desire to reassure and protect” her husband.

She said: “With one hand cradling the bump and the other placed on top of Harry’s hand on the arm of the chair she seems to send out a signal of being protective of both, as though whatever happens she won’t compromise the safety of either.

“Her hand is placed on Harry’s in a lidding gesture suggesting she is offering reassurance as he speaks.”

Meghan can also be seen cradling her bump, with Judi adding: “Her left hand either lays on her lap to display her wedding band or it forms what looks like a cradling gesture of her baby bump, emphasising her roles as mother and wife.” 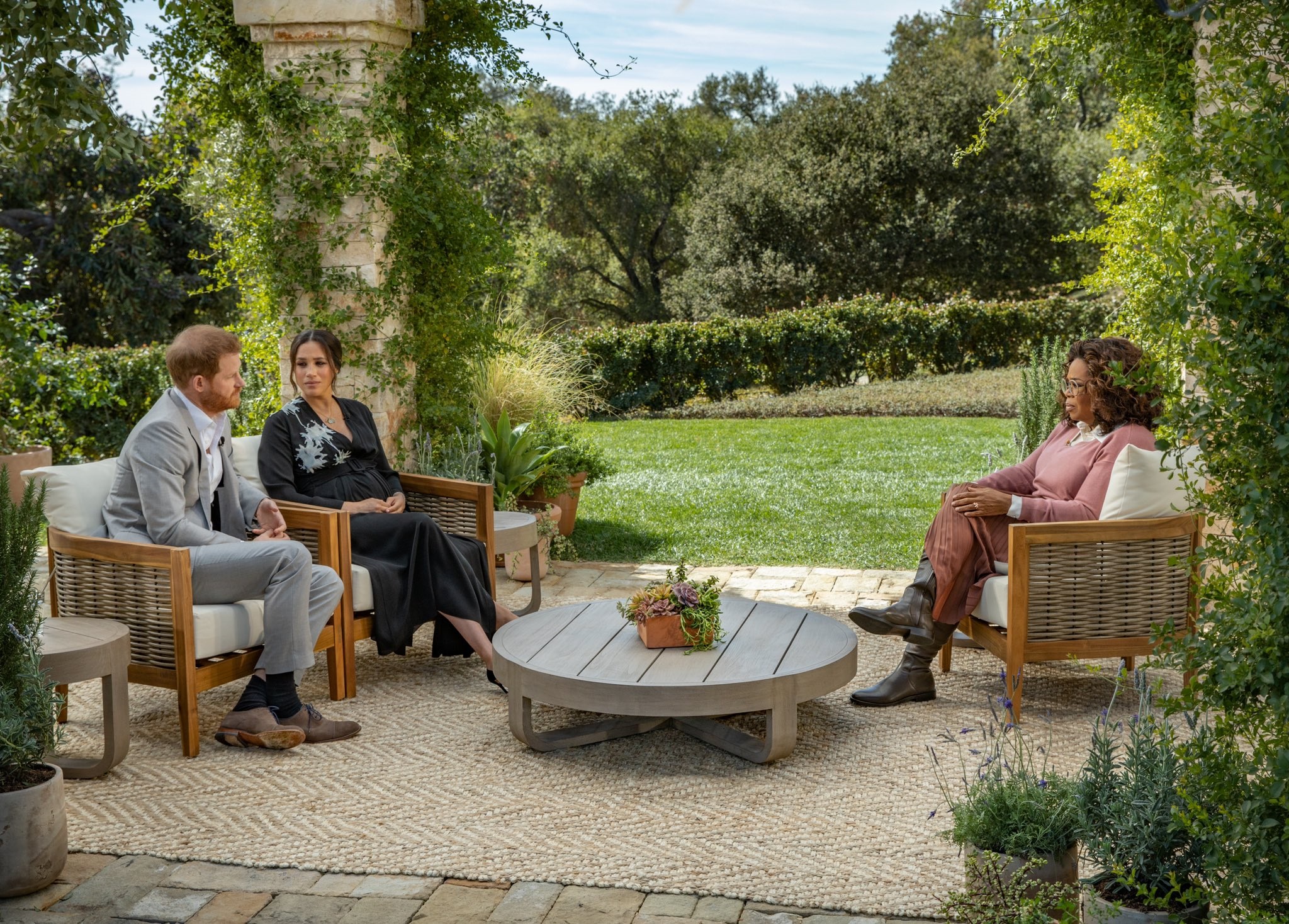 Meghan stunned in a $4,700 (£3,368) triple silk Armani dress and Judi said her “styling is show-stoppingly severe in complete contrast to the sweet and easy flowing dresses and hairstyles we have been seeing her choose recently.”

“In some shots both her arms are splayed, forming a double pit-bare gesture that would normally signal a sense of confidence and power.

“There are no signs of any ‘lowering’ signals like smiles or laughter here to suggest any anxiety or awkwardness.”

Oprah said the couple had revealed "some pretty shocking things" – some of which seemed "almost unsurvivable".

Holding hands with his Meghan, Harry said: "You know for me, I'm just really relieved and happy to be sitting here, talking to you, with my wife by my side.

"Because I can't begin to imagine what it must have been like for her, going through this process by herself. All those years ago.

"Because it's been unbelievably tough for the two of us, but at least we had each other."

Meghan is then heard saying: "Yeah." 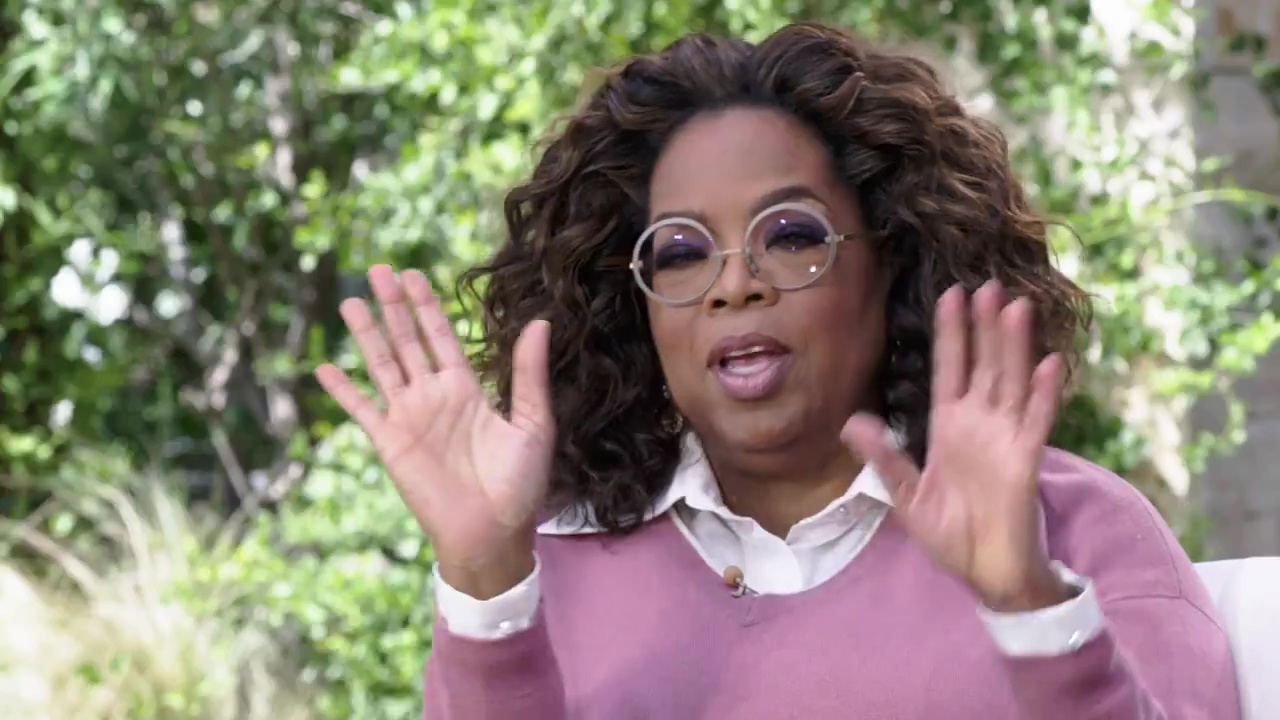 "I just want to make it clear to everybody there is no subject that is off limits.

"Almost unsurvivable, sounds like there was a breaking point."

Harry replied: "My biggest concern was history repeating itself."

The “primetime special” with Meghan and Harry was initially set to last 90 minutes, but CBS have now reportedly extended that to two hours.

It's been reported the Queen was "blindsided" by Harry and Meghan's announcement of a "tell-all" interview with Oprah. 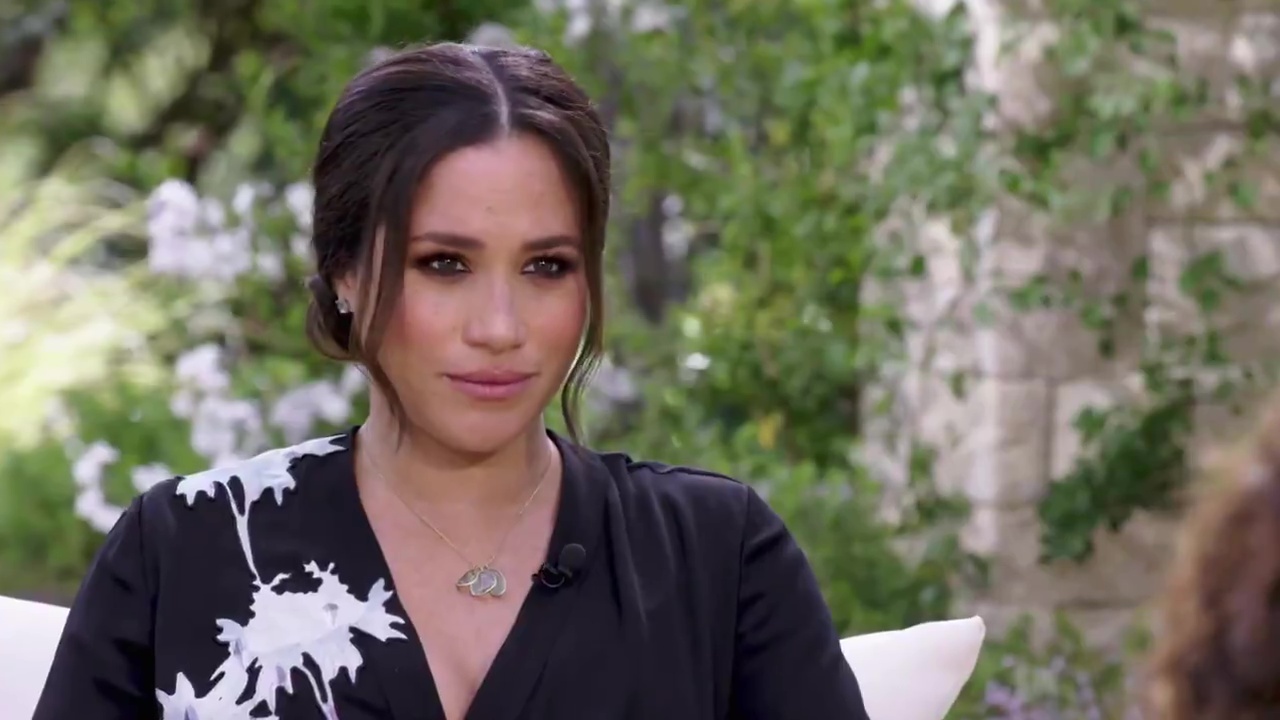 The royal couple apparently failed to inform the monarch of their plans before revealing they'll chat to the American chat show host.

And she only learned of it when US TV network CBS hurriedly issued a statement on Monday – after a producer working for Ms Winfrey mistakenly alerted ITV of the plans, the Mail on Sunday reported.

News of the big interview emerged after the couple announced Meghan's third pregnancy – and days before Buckingham Palace confirmed the pair will never return as senior royals.

Members of the Royal family usually run potential TV interview opportunities past the Queen in advance.

The couple sat down with Ms Winfrey to record the chat last Tuesday, it's understood.

Harry and Meghan were forced to reveal the interview ahead of schedule after ITV were tipped off.

The couple are believed to have spoken about marriage, parenthood, life as royals and their charity work during the discussion.

Oprah's very rare sit-down interview with Prince Harry and Meghan is scheduled to air on CBS on March 7 from 8pm.

And Meghan Markle and Prince Harry launch new Archewell logo with the word ‘service’ after cruel jibe at Queen.