After Alicia Castilla Zelek got home from her first date with Alexander Robert Mantel in August 2017, she could not wait to tell her sister that she could potentially see herself marrying him.

“I liked his smile and sense of humor, and he had a calming presence,” said Ms. Zelek, 34, who added with a laugh, “I could be a little high strung sometimes.”

They connected on the dating app Hinge a couple of weeks before their five-hour date began at Martin’s Tavern in the Georgetown section of Washington, followed by dinner around the corner that ended with a good night kiss.

“We knew by the third or fourth date we were really vibing,” Mr. Mantel, 39, said. They began seeing each other a couple of times a week.

“She’s very, very beautiful,” he said, and some friends say she resembles the actress Anne Hathaway. “She is someone who is warm and outgoing. It was immediately comfortable. We really had fun together and laughed together.”

Ms. Zelek is a manager in human resources at Capital One in McLean, Va. She graduated from Duke and received a master’s degree in policy, organization and leadership studies from Stanford.

Mr. Mantel is a high school counselor at Langley High School in McLean, Va. He graduated from the University of Virginia and received a master’s degree in education focusing on school counseling from George Washington University.

Five months into their relationship Mr. Mantel, who grew up in New York, was immersed in Cuban culture when he accompanied Ms. Zelek to her sister’s wedding in Miami.

“I introduced him to my family and Cuban food,” said Ms. Zelek, who grew up in Coral Gables, Fla., watching telenovelas and the once popular Sábado Gigante variety show on Univision, the Spanish-language TV station.

Ms. Zelek, who does most of the cooking (sometimes he grills), a couple of times a month slips in her specialty — picadillo, a ground beef dish with white rice, black beans and plantains. Ms. Zelek served as guide and chief translator as they traveled through Spain last year, and visited her relatives up north in Ramales de la Victoria. 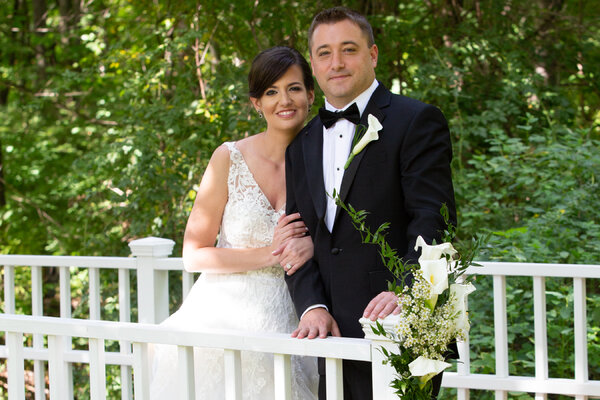 In May 2019, after going out to dinner to celebrate their birthdays, which are a day apart, Mr. Mantel got down on one knee (she joined him on one knee, too) on the rooftop of their building in Arlington, Va., where Ms. Zelek’s brother, Gregory, had secretly set up a table with flowers, chocolate and wine.

They originally planned to marry at St. Malachy’s Church, the Actors’ Chapel in New York on March 28, 2020 followed by a reception at the Yale Club, with 190 guests. The Rev. John W. McHugh, a Roman Catholic priest and a cousin of the bride, was to officiate before coronavirus set in. He stood by them during days of uncertainty, as their plans shifted four times.

“We did the best we could, Rev. McHugh said. “We scheduled and rescheduled. I told them, and other couples, we will get through this. Have faith in God.”

On Sept. 5, Rev. McHugh led a ceremony at the Church of Saint Ann in Avon, Conn., of which he is the pastor, with 43 guests in-person and about 100 others via a livestream link.

Ms. Zelek wore a gown by the Spanish designer Rosa Clará and carried white calla lilies just like her mother at her wedding in Miami, and her grandmother before that in Havana. The off-white lace mantilla that was handed down from them was held over the bride’s head and draped over the groom’s shoulder by the couple’s mothers during the nuptial blessing.