Home » Beauty and Fashion » Candy Gets a Brand Extension

Candy Gets a Brand Extension

When Robyn Blair Davidson, 34, was envisioning an aesthetic for her New York City apartment two years ago, her eyes wandered over to a bowl of candy on her table.

“I realized then and there that I should be filling my walls with pieces that make me as happy as the bowls filled with candy do,” said Ms. Davidson, an artist.

Today, Ms. Davidson’s home contains a custom-made desk with yellow, blue and pink candy dots; her walls are covered with candy-themed art; she has a massive tub of Dubble Bubble; and her display shelves contain rare vintage candy in its original packaging.

She has incorporated her candy obsession into her art and also sells candy dishes, puzzles, phone cases and a series of prints featuring candy that say: “Warning Sugar High.”

“At the end of the day, a sugar high lasts a moment while my artwork lasts a lifetime,” Ms. Davidson said. 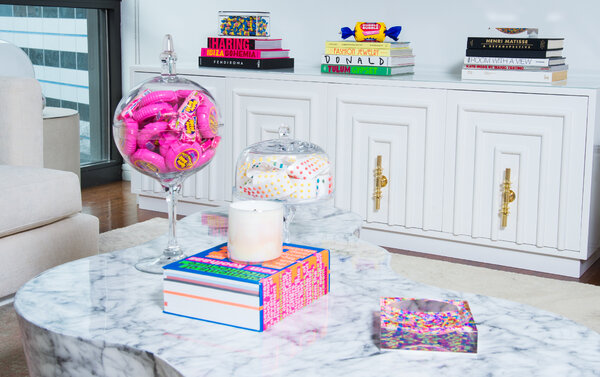 Slowly but surely, candy — prize of children, scourge of dentists, and already being marked down from Valentine’s and up for Easter — has been getting a brand extension.

The candy retailer It’s Sugar, which was founded in 2004 and now has more than 100 locations in the United States, opened a store in mid-December at Oakbrook Center in Illinois, stuffed with Swedish Fish-shaped stuffed animals, Reese’s socks, Oreo backpacks and Sour Patch Kids candles.

The merchandise is just one more way for these fans to engage with their favorite candy brand, Ms. Freid said.

M&M’s World and Hershey’s have long personified their brands, with animated M&Ms and the giant squishy Kisses Chocolate Plush Toy.

But the sweetness has also reached the upper ranks of luxury. Prada has cloned the scent of caramel (with a hint of musk and iris) in its Candy Eau de Parfum; Jimmy Choo created an $895 “Candy Embellished Crossbody” bag with crystals that resemble candy dots; and Irene Neuwirth’s One of a Kind Faceted Beaded Candy Necklace, made out of 18K yellow gold, is priced at $16,520

“For many people, there is an intangible magic and social currency associated with these products that rests on nostalgic experiences,” said Christopher Gindlesperger, the senior vice president of public affairs for the National Confectioners Association in Washington. “Chocolate and candy companies have built on this by meeting consumers of all ages where they want to be met: with merchandise that captures the fun and unique nature of the brands being sold in all types of retail outlets.”

At the Sour Patch Kids store — the first of its kind — which opened this summer on lower Broadway, merchandise sales make up roughly 40 percent of total sales, Ms. Freid said. The most popular items are a themed pillow, plush “Stuffed Kids” that can fit inside the pillow and a Kids Funko Pop.

At Dylan’s Candy Bar, which has about a dozen locations worldwide after 20 years in business, the lifestyle merchandise makes up about 9 percent of the inventory, the company said. It has worked on products with Williams Sonoma, Maclaren Baby and Hanky Panky, the underwear brand.

“When we were designing the stores, we knew we wanted it to feel like you’re stepping inside a world of candy, so having those different departments of accessories, PJ’s, pillows and more within the store created another fun element to shopping,” said Dylan Lauren, the founder and C.E.O. Shoppers at Dylan’s most frequently reach for the Donut and Candy Button pillows, the Sprinkles Notebook and the Candy Spill Robe, Ms. Lauren said.

Lu Ann Williams, the global insights director at Innova Market Insights, which analyzes data in the food and beverage industry, believes candy merchandise is succeeding suddenly in part because of how it pops on social media.

Consider the influencer Jojo Siwa, who debuted her new Los Angeles-suburb bedroom on TikTok in February, showing off a sprinkles-decorated vanity and desk, scented candy-shaped pillows, a candy dispenser headboard and more than 4,000 pounds of candy.

Nostalgia is also a factor, Ms. Williams said. Perhaps being told to effectively “stay in our room” for quarantine makes Americans feel like children?

If so, It’s Sugar was prescient, beginning to create exclusive merchandise with the candy brands in early 2020. Justin Clinger, the director of design and licensing for the company, said inedibles now make up about 20 percent of the stores’ total inventory and sales are up significantly.

It’s customers like the aptly named Candy Marlo who are driving these sales. Ms. Marlo, who is in her 40s, already owns three candy-shaped pillows, and her entire wardrobe is construed from candy-inspired apparel. All of her jewelry looks like candy.

Ms. Marlo used to work as a corporate trainer and instructional designer, but taffy’s pull proved too strong to resist. She started a candy vlog, Ms. Candy Media, and began creating her own candy fashion in 2014 with bonbon headpieces and candy couture outfits. In 2020, Ms. Marlo began selling sprinkles-coated headbands and crowns.

“Everyone loves candy, but not everyone can or wants to eat it,” Ms. Marlo said. “But everyone can consume the product by consuming the merchandise.”