Running into friends on the street has gotten a lot more complicated.

Judah Gruber, who is sometimes mistaken for celebrities including Mark Zuckerberg and Peter Scanavino, near his home on the Upper East Side of Manhattan.Credit…Karsten Moran for The New York Times

Julianne Kassidy had one ex she definitely didn’t want to run into. (Don’t we all?)

In late October, it had almost been a year since Ms. Kassidy, 20, a college student in Los Angeles, had last seen this former boyfriend — until she walked into a grocery store, and there he was. Her heart raced, she felt sweaty and she started panicking. Would he follow her to the car? Would she have to talk to him?

Then it dawned on her: He didn’t recognize her because, per local and national guidelines, she was wearing a face covering.

Saved by the mask.

The main role of a mask is obviously to protect you and the people around you from the coronavirus. But some people are finding another positive benefit to wearing them: anonymity. The ability to walk down the street and not be recognized is a gift many are cherishing. For some it means the end of unwanted small talk when they are trying to run errands. For others, it allows them to be exactly how they want to be in public — there is no need to put on a fake smile or hold back tears — regardless of who is around.

“Do you know how many random men used to tell me I would be prettier if I smiled?” said Ms. Kassidy, who also works for a lighting design company. “I haven’t heard that in nine months, and it’s incredible. It’s none of their business.”

Of course, there are downsides to everyone being hard to recognize. There are awkward encounters when friends and family members mix each other up (“I thought you were Sarah!” ”I look like Sarah?!”). Others feel masks sever a connection to their community. 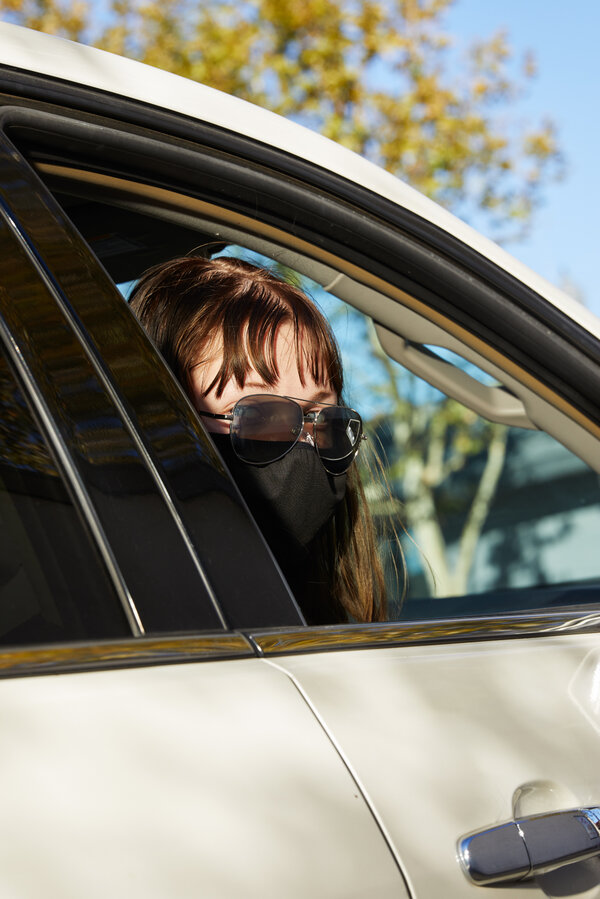 Christopher Franklin has lived in Norman, Okla., since 2012. While it’s one of the bigger cities in the state, it has a small-town feel to it. “I waited tables for a long time, so I know everybody,” he said. “I run into people all the time.”

Mr. Franklin, who is 35 and works for a pharmacy software company, used to dread bumping into people he knows. It gave him anxiety to be peppered with questions or have to think of what to say. He has even had a few panic attacks.

Sure, wearing a mask limits those encounters. But it also makes it easier for him to chat with people when a run-in still occurs.

“I suppose it’s a vulnerability thing, or it could just be a breathing regulation thing or a ‘we are in this together’ unity thing,” he said. “I really don’t have a good answer, I just know I feel a lot less anxious when I am wearing it in public. It makes it a little bit easier to talk to people.” He said even when the pandemic ends and masks are no longer medically necessary, he will keep one in his pocket.

Mr. Franklin also has someone in his life he doesn’t ever want to see again. “It’s a fellow, and I would rather not share why I dislike him,” he said. “There is no great way to explain it, but we all have these people we would rather see first than vice versa, right?”

Mr. Franklin was in a gas station, and the man in question walked up to the counter in front of him. He immediately thought he could use his mask as a shield. “I looked away from him, and I made sure it was far up and covered my face,” he said. “I saw him looking at me twice. I counted it. Then he left. He didn’t seem to recognize me. Just that extra seed of doubt that someone may not be who you think, it was enough to keep him away.”

What about in even more sociable environments?

Mr. Chileski, 20, likes premeditated social gatherings. “If I know someone I know is going to be at a certain place, and I talk to them, I don’t care. I’ll mentally prepare to have that conversation,” he said. “I like having friends.”

But spontaneous encounters, not so much. “Sometimes when people spring up on me and pester me with a whole bunch of questions, it is rough for me,” he said. “I will immediately turn around and leave the dining room if I see people I know.”

This year has gone much smoother than the last because of one handy prop: his mask, which allows him to see and be seen only when he wants.

The day after Mr. Chileski moved in, a friend of a friend waved to him in the parking lot, but he didn’t recognize her because of her mask. It was the perfect excuse to avoid saying hi (although he later figured out who it was and apologized because he felt bad ignoring her). Some of his classes still meet in person, and he can sit anywhere in the room without being pinpointed. He no longer gets approached in the cafeteria line or while running errands.

“The masks are kind of a good thing because they just let me be,” he said. “For outgoing people that must stink, but for me, it’s phenomenal.”

Bhushan Sethi, 47, lives on the Upper East Side of Manhattan and runs around Central Park, either the loop or the reservoir, daily. He is a director at PricewaterhouseCoopers, and this ritual is his “me” time. “It’s my way of processing some stuff and preparing for the day,” he said.

As the park has grown more crowded during the pandemic, Mr. Sethi guesses he is running past clients, colleagues and friends he knows. But his mask helps him stay in the zone without worrying too much about who is around him. “You don’t look for people now,” he said. “There just aren’t as many casual collisions.”

Not that Mr. Sethi is some kind of misanthrope. “I am very proud of watching all these people wearing masks,” he said.

Some people, however, dislike being overlooked, and so they are wearing “signature” masks, in bold prints like leopard or gingham — or, more radically, changing their hair color.

Kendra Vanderwerf, 34, runs a hair salon in her home in Ontario, Canada. With her striking red hair and five-foot height, clients come up to her regularly, even when she’s wearing her mask. “People recognize me as the tiny thing wandering around with bright hair,” she said. Her husband, David Vanderwerf, 40, a teacher, offers another distinguishing characteristic: He walks with a cane.

But she doesn’t have the same clues to identify others. “I am waiting in the conversation for them to drop a hint to who they are,” she said. “I don’t want to be mean and say, ‘I can’t recognize you with your mask on,’ even though I can’t.” She has occasionally had to ask leading questions about work and their families to gather more information.

The situation makes Ms. Vanderwerf sad. “I don’t want people to be anonymous, because I still like making those connections with people,” she said. “When we run into students, I love hearing them say my husband is their favorite teacher. That conversation makes my day.”

She’s discussed the issue with clients, and more of them have asked for different, noticeable hairdos as well. “I’ve had a major uptick in vivids, which is the bright, crazy hair,” she said. “I used to have five a month. Now it’s more like 20.” Recently she used “blues and yellows and a little green” for a style inspired by Van Gogh’s “The Starry Night.”

Even the most intimate bonds can be muddled by the mask. A joke about bringing home the wrong husband is making the social-media rounds: “Stay alert people!”

Cheyenne Vance and her boyfriend were in the frozen foods aisle of the grocery store, buying the chicken nuggets she loves, when a masked woman walked past them pushing her cart. Her boyfriend did a double take and recognized the sweater as a Christmas present he gave last year. Even when he uttered “Mom?”, however, he wasn’t totally sure it was her.

But it was. Soon the three of them were laughing and joking about what food items they were going to buy. Ms. Vance, who hadn’t met her boyfriend’s mother before, wanted to make sure it was understood she was the one paying for her $8 chicken nuggets.

“My food is expensive because I’m gluten-free,” said Ms. Vance, who is 24 and works in customer service in Kingsport, Tenn. “It was a little embarrassing.”

Mr. Franklin of the gas-station near miss works at a medical marijuana dispensary in his free time. The other day he was chatting with a client for a few minutes, before he started considering it may be someone he already knows. “She had a lot of similarities to a good friend of mine,” he said. “I had to look at her medical marijuana card to be sure. I was going to feel really, really awful if I didn’t recognize her because of a small piece of cloth over her face.”

Judah Guber, 37, who works in digital strategy and, like Mr. Sethi, lives on the Upper East Side, has one of those faces that people think they recognize. “The guy I get most these days is Peter Scanavino from ‘Law and Order: SVU’ and sometimes Simon Baker,” he said. “I also get Anderson Cooper all the time.”

“Strangers stare at me, and I’m always like, ‘Do I have something on my face?’” he added, laughing.

Wearing a mask has only compounded Mr. Guber’s problem. With half his face covered, people really have no idea if he is a celebrity or not.

“I passed by Stumble Inn, this bar, the other day and someone said, ‘I think that is Mark Zuckerberg.’” he said. “I turned around, and I heard him say to his friends, ‘Is it really him?’”

Mr. Guber was not flattered. “I wish I was more anonymous when wearing a mask,” he said.