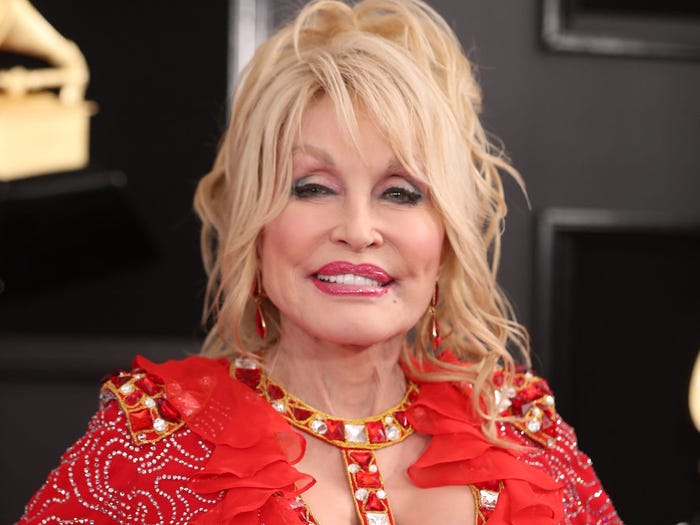 Dolly Parton's wigs, makeup, and heels are all major parts of her signature look.

But rather than just wearing the accessories onstage, Parton also wears them frequently while relaxing at home. The legendary musician recently spoke with RuPaul for Marie Claire's digital December cover, and she discussed everything from music to her morning routine.

When RuPaul asked if she wore heels while cooking breakfast on the morning of their interview, Parton replied: "I always wear my high heels. Don't you?"

After Parton mentioned that she "always" wears high heels, RuPaul noted that there are similarities between himself and the singer, but that he "takes all that stuff off" at the end of the day.

"Well, I don't," Parton replied. "I have to always stay ready — street ready, I always say. I have to keep my makeup on and keep my hair done. Like, when I'm in LA — I've told you about it — if it's going to earthquake, if we get an earthquake, I'm not running out in the street looking like you look now. I have to be ambulance-ready at all times, if I get sick or something."

"But I actually do wear high heels most of the time," she continued. "They're not always as high as the ones I wear for show. But I'm little. I'm short. And I have to wear heels in order to reach my cabinets. But I always enjoy wearing the shoes too, and I just feel more like me."

That being said, Parted noted that she "can come down, though," as she said she's comfortable in her skin and with her image.

"I dress for myself more than I do for somebody else," Parton told RuPaul.

RuPaul mentioned during their interview that he's never seen Parton wear the same outfit twice. Parton, however, said it's untrue that she doesn't recycle clothes.

"If I love something, I wear it," she said. "If I'm on tour, I have stage outfits that I wear. But if it's for a real special occasion, then I will put that in my museum, or I will allow other people to put certain costumes in their museums, or we auction off pieces for charity. So nothing ever goes to waste."

Of course, there's more to Parton than her standout wigs and sparkling outfits. Not only did she partially fund the development of a COVID-19 vaccine, but she's also spent much of the pandemic helping children through her organization Imagination Library.