Dua Lipa sizzled at the 2021 Grammys, arriving in a glittering pink Versace gown with a sequined butterfly on the bodice, ahead of her performance during the show.

Dua Lipa absolutely dazzled on 2021 Grammys red carpet in a custom pink glittery Versace gown. It featured a butterfly pattern on the bodice, with dual sexy shoulder straps on either side and a plunging neckline. The frock featured sexy cutouts both of her hips. Her skirt was made up of a silver mesh glittering fabric which showed off her incredible legs, and had a high slit up to her left thigh. The English beauty wore her tresses long and straight down her back, as not to detract from the stunning gown. Dua matched her makeup with her gown, wearing a pink and lavender eye. 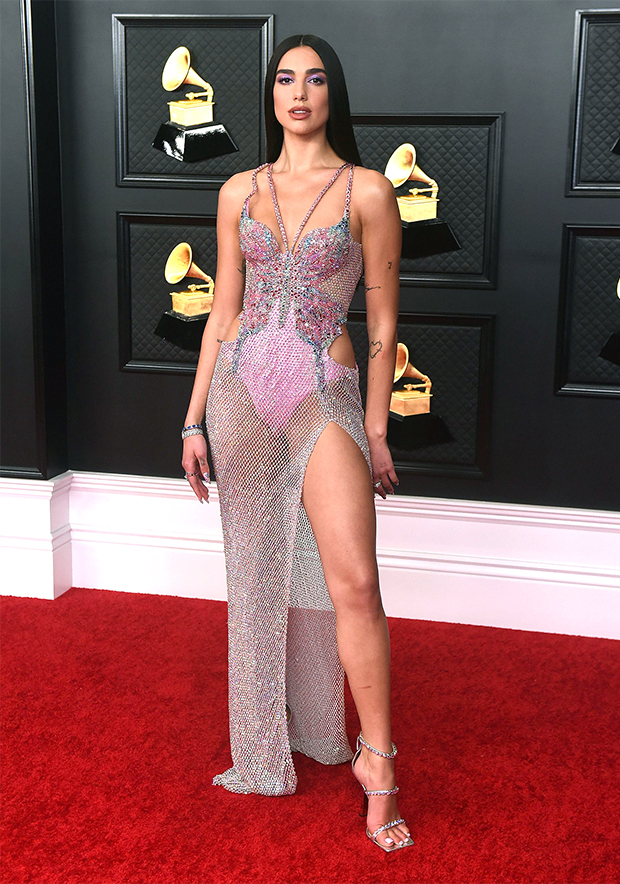 2019’s Grammy winner for Best New Artist plans to show the Recording Academy that they definitely made the right choice, as she returned to the awards show to take the stage on Mar. 14. She revealed on the red carpet that she will be doing a “medley” of her songs, and previously revealed that it will feature her smash hit “Don’t Start Now.” The 25-year-old London native will be joined onstage by DaBaby for the performance, which will go down at the Los Angeles Convention Center.

“Don’t Start Now” is nominated in two of the biggest categories of the night: Song of the Year and Record of the Year. Her second studio album Future Nostalgia completes the top three category trifecta, as it is nominated for Album of the Year. Should Dua come up empty there, Future Nostalgia is also up for Best Pop Vocal Album and “Don’t Start Now” for Best Pop Solo and Pop/Duo Performance. On Nov. 24, 2020 when she found out she was nominated for six total 2021 Grammys, video of her reaction — weeping hysterically with a mix of shock and joy — went viral.

Ahead of the big event, Dua explained that she was so thrilled to be able to perform for an audience again. “I’m really excited. I’m really, really excited,” Lipa revealed on the Mar. 8 edition of Backstage At The 63rd GRAMMYs. “I’m just so happy to be able to get back on the stage and do it safely and get to see the other artists performing. It’s really exciting although quite different from last time. I’m very much looking forward to it.”

Dua’s second studio album Future Nostalgia — her first since her initial Grammy win — dropped on Mar. 27, 2020, just as the entire nation had gone into home lockdown due to the COVID-19 pandemic. Though she wasn’t able to get out on the road and promote it, with everyone stuck inside and desperate for new content, it ended up becoming a smash hit. That’s something Dua is incredibly grateful for.

“Patience and strength have become two things that have really come quite strongly out of this record. First of all, I guess…even though it was at home and with the support of everybody around, it gave me so much confidence and made me feel like I could really do it, and I deserved to be here (at the Grammys),” she explained to Backstage.

“I guess it’s constantly giving me so much still. That I look back at so many experiences during this album that I’m so grateful for and I’m so thankful for. And at the same being able to do it from home was never something I’d envisioned in a million years. And to still have had that response is unbelievable. So I’m still on that journey, but I’m feeling very proud,” the singer added. Dua plans to finally hit the road for her Future Nostalgia tour in Sept. 2021 once the COVID crisis has finally passed thanks to mass vaccinations, and venues are able to re-open again to touring music acts.