Home » Beauty and Fashion » From the Cradle to the Grave, What Kind of Comfort Do Women Want?

From the Cradle to the Grave, What Kind of Comfort Do Women Want?

In the before-before times, or maybe the before-before-before times, not only prepandemic but also pre-Sept. 11, New York Fashion Week was held in Bryant Park, around the historic anchor of the old garment district and the schmatta land of Seventh Avenue. After awhile the neighbors got annoyed by the flood of fashion people taking over the park, and the tents started to migrate: first to Lincoln Center, then to Spring Studios downtown, and now … well, pretty much anywhere there’s some outdoor space for a few hundred people and a cool view. The center did not hold.

So you can understand how, on the eve of the 20th anniversary of the World Trade Center attacks, as the shows stage a sort of manic return and designers rally behind the city, Jeremy Scott thought it would be a fitting homage to unveil his Moschino collection, normally held in Milan, in the place that used to be the beating heart of fashion week. There’s a lot of history in the grassy verge behind the main branch of the New York Public Library. 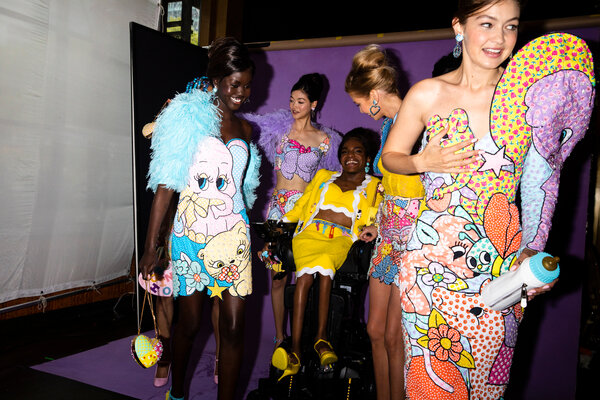 Unfortunately, the idea caused him to regress in more ways than one — all the way back to the nursery, in fact.

Calling his collection “baby ladies,” Mr. Scott sent out a candy-colored parade of little 1960s miniskirt-lunching suits and pussy-bow shirtdresses in gingham and bouclé festooned with stuffed animals: bunnies and lambies and duckies (pretty much any wee critter that could have the diminutive “ie” attached to its name). There were big heart buttons on jackets and big bouffant hairstyles; spiky pastel Mary Janes and toy handbags; and for evening, an asymmetric patchwork baby blanket gown with a sleeve replaced by an elephant’s trunk. Punny!

Mr. Scott is fashion’s resident postmodern camp provocateur, using his shows to make absurd but often needle-sharp commentary on consumer culture and politics. This time ’round he said he was thinking about the need for comfort, and hugs, which made him think of childhood, which made him think of … well, clothes that resembled a fantasy crib, apparently.

But who really needs that? This is not a moment when any woman wants to be infantilized. (Watching one model struggle to walk in the spiky shoes as her ankle continually gave way was unnecessarily painful.)

To make the presentation into a one-liner is no laughing matter. The day of the show it rained, literally, on Mr. Scott’s parade. It felt like a metaphor.

There are all sorts of ways to convey comfort, after all, that don’t imply a lack of power and agency.

Gabriela Hearst’s artisanal knits, for example, which were created in conjunction with crafts collectives in Bolivia, Uruguay and the Navajo Nation, feed the soul while they wrap the silhouette. “I feel like the collection is becoming like a journal of what’s happening and a platform for other people’s work to be showcased,” Ms. Hearst said backstage.

Or Wes Gordon’s sweeping ball gowns and bebowed cocktail frocks for Carolina Herrera, a brand celebrating its 40th birthday, where formality in duchesse satin and trains, puff sleeves and puffier skirts, provided its own safe (if somewhat stilted) haven.

Or Sergio Hudson’s way with proportion and no-nonsense entrance-making, which seems to come with its own internal combustion engine. Remember the tone-on-tone burgundy trousers with just a bit of flare, matching turtleneck, sweeping greatcoat and belt with a big circular gold buckle that Michelle Obama wore to President Biden’s inauguration? The one that made her look like the Washington version of a superhero: armored in elegance and able to surmount many hurdles in a single bound?

If not, the look made an appearance again on the designer’s runway, this time in traffic-light red — as did many iterations of the belt, which Mr. Hudson is smart enough to have adopted as his signature, and which came clasping neat trench coats and sharp-shouldered periwinkle blazers, under bright yellow marabou chubbies and over liquid charmeuse shirting. The message was strong enough to lure Sheila E., “the Queen of Percussion” and former Prince collaborator, into a runway performance of her 1984 hit “The Glamorous Life.”

(Which, by the by, was being lived a few hours later by LaQuan Smith, who held his sheer-’n’-shiny-’n’-sexy show on the observation deck of the Empire State Building, complete with baby bottles of Moët, enough crystals to compete with the city lights laid out below, and a pair of prancing poodles that out-modeled the models.)

Before that, however, the mini-concert provided the sort of cathartic souvenir of before times that actually did resonate through the room.