Home » Beauty and Fashion » Gerald Stratford Knows How to Garden

Gerald Stratford Knows How to Garden

Gerald Stratford’s big vegetables and ordinary life changed with a tweet. He posted two pictures of himself wearing a red T-shirt and matching pants held up by thick blue suspenders in May 2020.

In the first photograph he’s standing and holding a giant bundle of rocket — or arugula as it’s called in the United States — and in the other the 72-year-old sits on an upside-down bucket with a bowl of potatoes. He’s smiling like a small child with still pudgy cheeks, shining with a little glow.

“My phone started, bleeping and buzzing and making all sorts of noises, and, to be honest, I didn’t know what was going on,” Mr. Stratford said in a Zoom call. “And so I found my nephew, who’s pretty switched on to computers and he came back to me a few minutes later on the phone and said, ‘You’ve gone viral with your spuds.’ Now, I even had to ask him what viral was.”

Mr. Stratford had gone from retired butcher to barge driver on the Thames River to internet famous. He became a minor celebrity with photos of his not-so-ordinary garden filled with large vegetables, in the tiny village of Milton-under-Wychwood in Oxfordshire, England, where he lives with his partner Elizabeth, his older brother’s widow.

Since then, he’s been featured in a fashion spread for Gucci. He has written a column for Newsweek, appeared on television in England and spoken with Eater. He has gotten hundreds of thousand of Twitter followers and now, even a book deal. 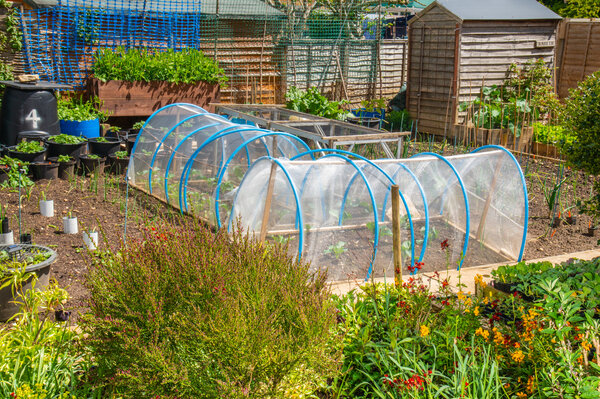 Mr. Stratford had been on Twitter for about a year when all of this happened. He joined because some other big vegetable enthusiasts told him it’s a place where they discuss what they’re growing. He’d posted photos of his projects before, but they seemed to be rarely noticed.

Then he became something else. Mr. Stratford’s honest and no-frills approach was an antidote on the platform known for outrage (performative and real).

“Gerald is just a normal person, just sort of your everyday uncle, basically,” said Mr. Stratford’s nephew Stephen over Zoom. “Between the two of them,” he said, referring to his uncle and aunt, “they’ve tried to be literally who they are. What you see on the internet. They’re not trying to make themselves look any different from what they are and because of that it’s actually paid off for them.”

When Mr. Stratford posted his first viral photos, it was about three months into the pandemic. People were baking sourdough and running low on toilet paper. Dread and sorrow were mounting.

Then there was Mr. Stratford and his vegetables. “I just don’t do that sort of aggression and sarcasm,” he said when asked about the parts of the internet where people tear each other down. “You know, the world is quite a dark place and let’s make people happy.”

Mr. Stratford grew up in the hamlet of Worton in the village of Cassington and close to Oxford. His father, Peter, was a farmer and his family farm had crops, hay, milking cows and beef cattle, as well as some sheep and pigs and chickens. The youngest of six children, Mr. Stratford received his first plot of land to garden — the size of a garden table — from his father when he was 5. He’s been gardening ever since, but never to the extent he does now.

He has two allotments — similar to a community garden where people are given land to grow vegetables — and space in his backyard. He and Elizabeth try to grow as much as they can to eat and preserve so they spend as little of their money on fresh produce. Elizabeth also grows flowers. If they have any extra crops, they donate them to to charity.

Farming not only brought joy, but it also brought sorrow into Mr. Stratford’s life. While it gives him comfort it also killed Peter. When he was 10, his family moved from the cottage to subsidized housing in Cassington after his father contracted chronic farmer’s lung, which is caused by inhaling too much dust and mold from crops. Mr. Stratford revered his father. “He was my king,” he said. His father died at 60 when Mr. Stratford was 19.

Mr. Stratford struggled in school — he was eventually diagnosed with dyslexia — and struggled to make friends.

“My nickname at the time was ‘banger’ because when somebody had a go at me for being thick, I used to hit them,” Mr. Stratford said. “You know, I’m not proud of it; you have to defend yourself.”`

At the time, fishing made Mr. Stratford happiest. He and the dog would venture into the wilderness and find a spot to fish.

“I learned pretty quick that if you just sit quietly and mind your own business, mother nature will come to you. If you see a grass snake in the summer, it will scurry away or swim across the river, but if you don’t move and just stay there, eventually, it will turn around and come back, and it will go about its business,” Mr. Stratford said. “It’s the same as a vole or a rat or a badger or a deer or bird, if you do nothing, it will accept you. It’s only man’s greed to control everything which makes, at times, our wildlife frightened.”

When he was 16, Mr. Stratford started his butcher education, which included eight years of schooling and apprenticeship. When he got his first paycheck, 3 pounds and 75 pence, he spent it all on a collarless jacket that looked like a blazer but buttoned up tight to the neckline like the one the Beatles wore that year. He was supposed to bring the money home to make sure he paid his keep. His mother was mad, but she understood.

He enjoyed the work because it meant time out in the big city of Oxford. The only problem with being a butcher, Mr. Stratford said, was that he had to be inside. He’s a “country bloke,” he said, who likes the outdoors.

He left the profession and took a job working on the Thames River. “It was just a general dog’s body job,” he said, meaning that anyone could do it. He spent his days on the river. The work didn’t pay much, but it was enough and sometimes, if no one was around, he could fish while on the clock.

At 30, Mr. Stratford got married for the first of two times before his brother Ralph died and he and Elizabeth got together. He has three children He worked on the Thames until they didn’t need him anymore, and then he had a few jobs here and there until he retired. He kept fishing. He kept a garden the whole time too. Nature and he get along.

When Ralph died, Elizabeth started taking care of her sister and Mr. Stratford would visit. They’d stayed in touch throughout the years. Then, one day, they started dating. They got a “bungalow” together. It felt natural.

“He’s been one of my best friends forever,” Elizabeth said.

Elizabeth is Gerald’s de facto technology person. She sets up his Zooms and records his videos. Some of the most delightful moments in his posts come when she can be heard reminding him of what to say or when she gets excited. There’s a video from Dec. 21, 2020, in which he’s harvesting the Christmas potatoes. Mr. Stratford empties from a bucket, and she is in the background saying, “Ooh.”

With the couple, we’re reminded of the simple pleasures: That we don’t need to go far to find happiness. The couple rarely leave their home.

“What you see is what you get. Gerald is Gerald and he is who he is,” Elizabeth said. “He’s so passionate about his gardening. He’s so passionate he never takes a day off. I said once or twice to him, ‘Can we go somewhere?’ And he said, ‘I can’t, I’m too busy in my garden.’”

The fame hasn’t gotten to them, though.

“It’s not like we’re some pop stars or something,” she said. “That’s what famous is. Not two gardeners.”