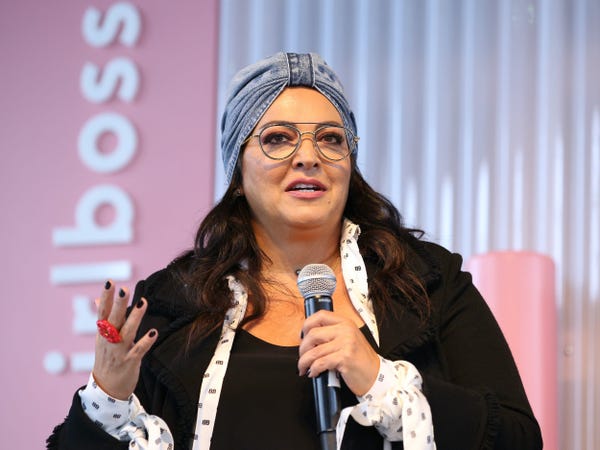 Whether you're a professional makeup artist or a casual cosmetics fan, you've probably encountered the Beautyblender.

You might, however, be less familiar with Rae Ann Silva, the iconic pink sponge's creator.

Silva invented the product while working as a television makeup artist in the early 2000s. It's since become one of the most recognizable beauty tools on the planet, with at least 17 sold every minute. In recent years, the Beautyblender brand has also expanded to sell foundations, primers, cleansers, and more.

According to Silva, it's her passion for beauty that's pushed the company so far — not her business skills.

"I am not your normal beauty executive, founder, or CEO," Silva told Insider. "I'm a makeup artist."

Silva never intended to work in the beauty industry

A Los Angeles native, Silva got her start at California's Fashion Institute of Design and Merchandising.

"I wanted to become a designer until I realized that my favorite part of my fashion studies by far was sketching," she told Spotlyte in 2019.

Silva worked at a makeup counter after leaving school. In the 1990s, she became a prominent TV makeup artist, working on shows like "Moesha." She also toured with musicians like Brandy, New Kids on the Block, Dr. Dre, Tupac Shakur, and more. These roles helped Silva — who is Mexican, Portuguese, and Irish — become known for her artistry working with people of color, according to Spotlyte.

By the early 2000s, Silva was back working on TV as a makeup artist for the UPN series "Girlfriends." Because the show was filmed in HD, where airbrushed makeup looks the most natural, Silva needed a way to touch up actors' faces without carrying the entire airbrush compressor.

Brushes wouldn't work because they caused streaks, and powder products didn't mix well with liquid makeup. This inspired Silva to decide one day to cut the edges off a wedge sponge, and the Beautyblender was born.

"I didn't look at Beautyblender as a global big brand in the beginning," Silva told Insider. "I was a professional makeup artist with a challenge, and Beautyblender was my solution to that challenge."

Beautyblender was the first makeup sponge of its kind, with one rounded end and a pointed, triangle-shaped tip

Silva couldn't have predicted that her on-set invention would become a global phenomenon years later — and that's likely for the best.

"I like to say that ignorance is bliss because had I known how difficult it is to accomplish this, I might have been too daunted to actually take that first step," Silva said. "But I was passionate, and being a person who didn't envision a big brand from the beginning made things easier for me to digest bite by bite."

While it's difficult for Silva to pinpoint her biggest accomplishments since launching Beautyblender, she's especially proud of the fact that her sponges are made in the US.

Silva is also extremely proud of the fact that she's created a new category of cosmetic products — an rare feat in the saturated, multi-billion dollar beauty industry.

Since Beautyblender became a household name a few years ago, countless brands have launched their own sponges in similar shapes and materials. But it doesn't bother Silva.

"Some people look at the whole market of what you would call knock-offs or fake Beautyblenders — even done by the most legitimate brands — as something that would be detrimental to the health of my business," Silva said. "Fortunately, we continue to thrive and grow, which gives me the ability to look at the whole concept of people copying me with a different lens than maybe another brand would."

"I call them my fans, and I look at this whole category now as Beautyblender-inspired products, and people who just love it so much that they want a piece of it," she added.

Silva has big plans for the future, and sage advice for young entrepreneurs

Many aspects of Silva's career mirror that of Bobbi Brown, who launched a namesake cosmetics company after becoming one of the most famous makeup artists in the world.

"Bobbi Brown was and still is very inspirational to me because she's been able to recreate herself a couple times," she said, pointing out Brown's new health-related venture. "For me, that's what life is all about."

Now the tables have turned. As young makeup artists and entrepreneurs enter the industry, it's Silva who they'll be looking up to. When asked what advice she would give them, the Beautyblender founder said those entering the beauty space should do so with thick skin and "a good set of morals and ethics."

"With the spread of technology, the barrier to enter the industry is so much lower than it used to be — and I don't mean that in a negative way," she said. "We have this ability to influence and impress with the tap of a keyboard."

"You have to have a really thick skin, and try not to give into the temptation of fighting back, or trying to justify everything," Silva continued. "The truth of the matter is that everybody has access to you now, and not everybody is going to be happy for you. It's up to you to set the tone of your business."

At the end of the day, there's a lot more to Silva than pink sponges and makeup

Silva describes her job as "amazing." Still, she sees Beautyblender as a "chapter" in her life, rather than the whole story.

"I live and breathe beauty, but when I look at my life, it's more than just the industry and my business," she said. "My life as a human being is the much bigger picture."

"I think I'm successful at Beautyblender because I have a passion for it," she said. "But I have passions for a lot of other things too." She said one of her biggest hopes for the country is that people will vote in the upcoming presidential election.

Regardless of the election's outcome, though, Silva has hope for the future.

"I feel like so many people in the last election decided to not vote because they weren't happy with their choices, but not voting is a choice that has repercussions," she said. "I wish people realized that they do matter."