Home » Beauty and Fashion » I spend 6 hours-a-day making myself look like Kim Kardashian – I ALWAYS wear a waist trainer, it's like a full-time job

I spend 6 hours-a-day making myself look like Kim Kardashian – I ALWAYS wear a waist trainer, it's like a full-time job

A KIM Kardashian fan has revealed she spends six hours-a-day transforming herself into her favourite reality star.

Jennifer Ward, 28, from LA, spends up to four hours perfecting her hair and make-up, another two hours in the gym, and says she's constantly chased by Kim's fans while out and about. 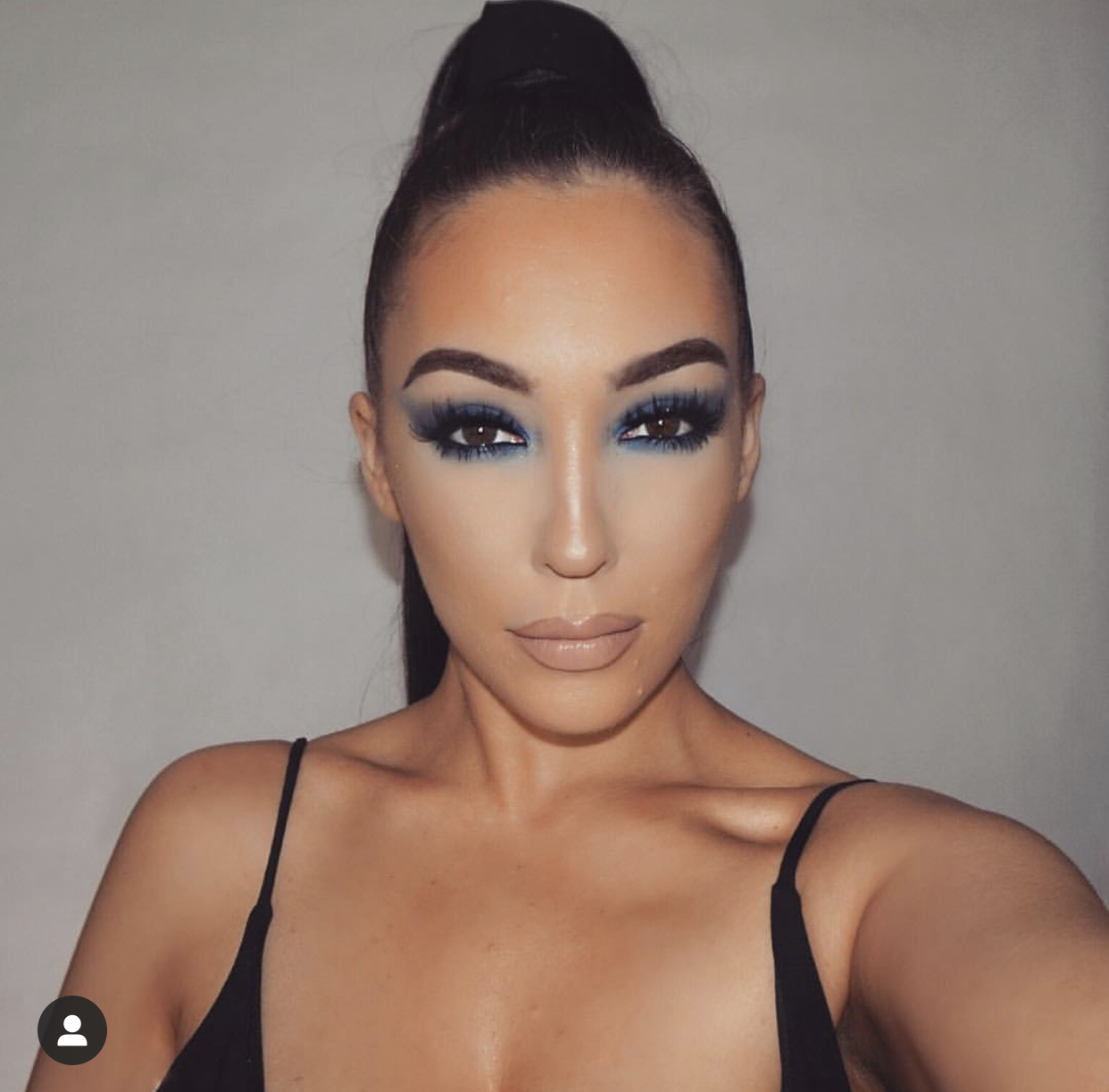 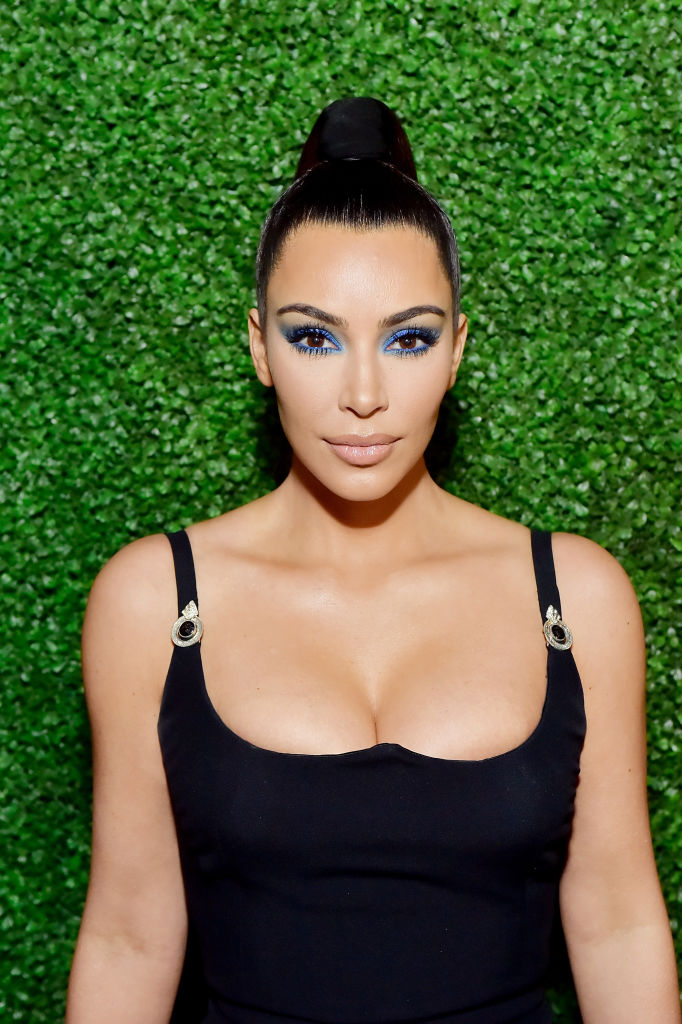 The married beauty blogger and singer shops online every week for copycat versions of Kim's outfits, hair pieces and make-up to look just like the mum-of-four – admitting it's like a full-time job.

Her dedication means she's bought three different waist trainers, which she wears constantly to hone her hourglass figure, and says she would have copycat surgery if needed.

I've been told I look like Kim for years, ever since Keeping Up With The Kardashians first aired in 2007. 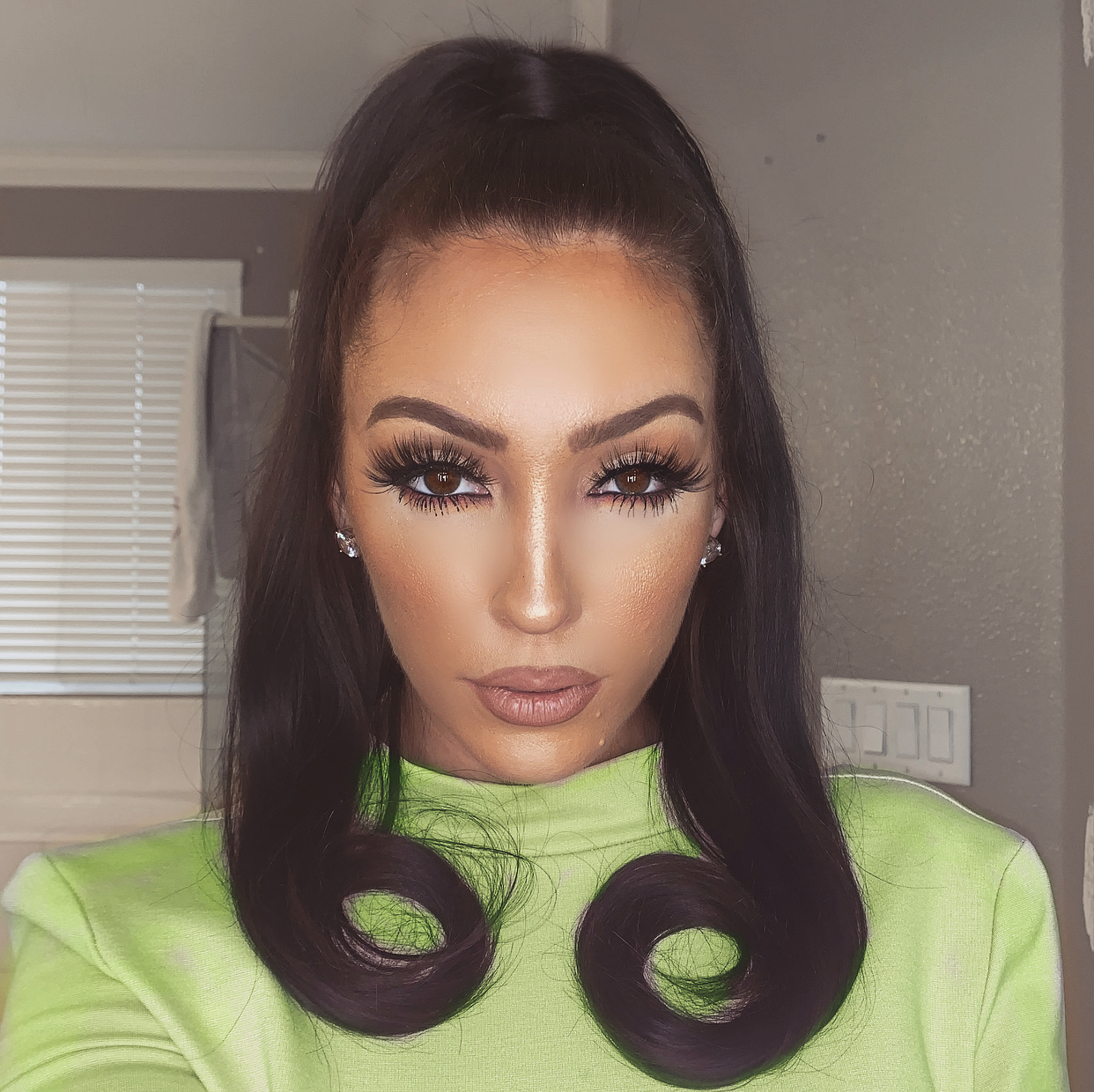 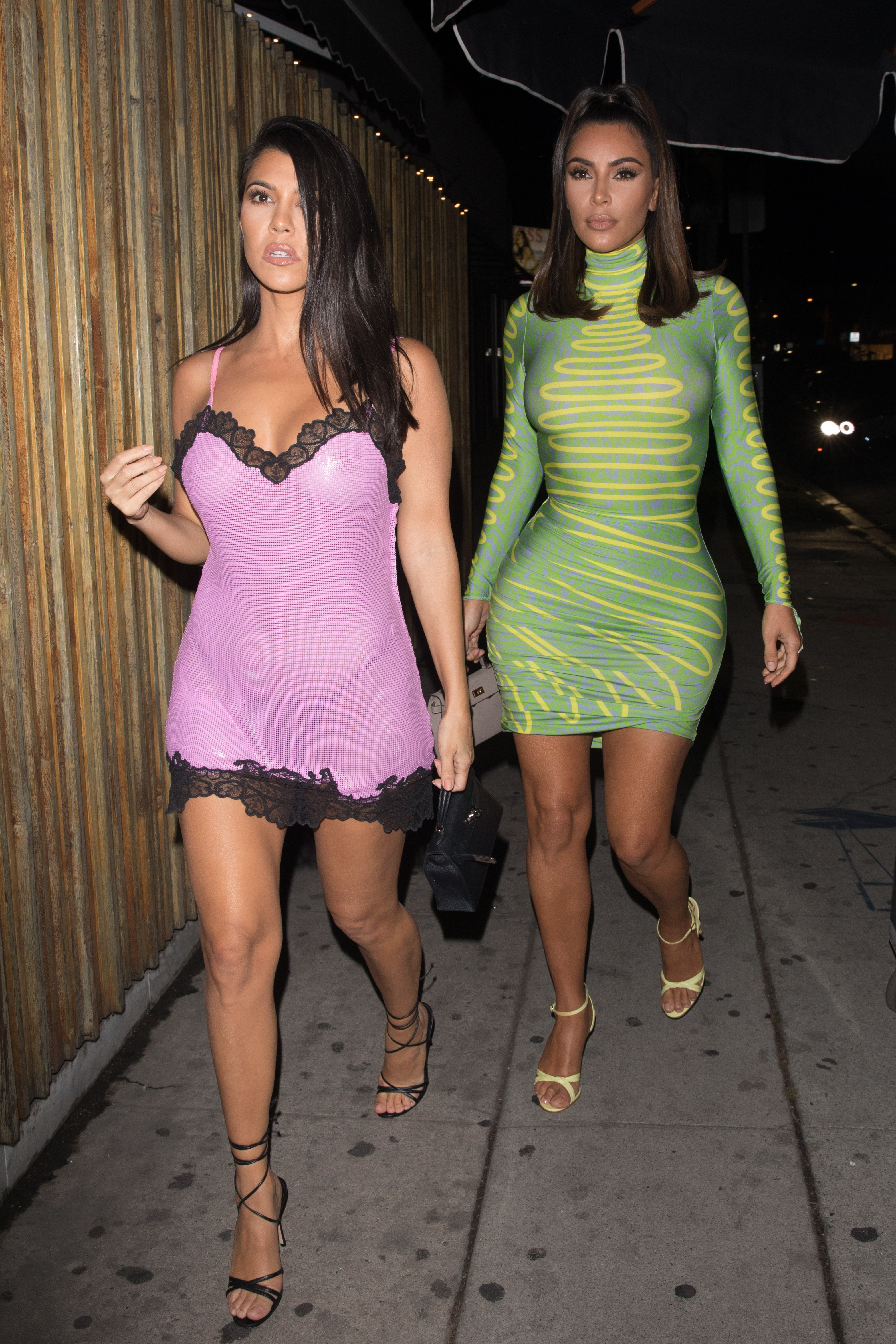 At first I wasn't trying to look like her, we just have similar features, but as I became more of a fan of the show I started trying to emulate her look.

In April 2018, Kim retweeted one of my lookalike pics, that's when things really took off for me.

Now I make a conscious effort to do my hair and make-up like Kim, so I think the likeness comes through even more. 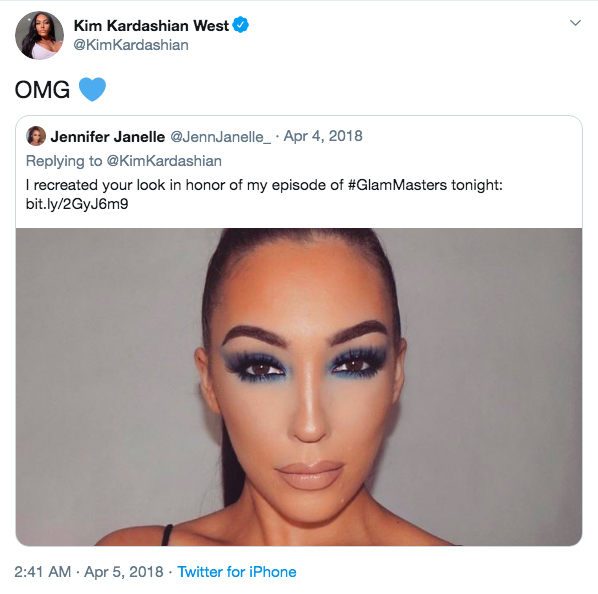 I've seen every episode of KUWTK. I think the family are so smart and talented, I love their style and everything they do workwise.

I watch Kim’s Instagram stories every day, I have to keep a close eye on everything she does, so I can keep up to date with my look and follow her trends.

It’s pretty much a full-time job. Her style changes so swiftly, she’s the biggest trend setter in the world so it’s difficult to keep up with her.

Sometimes it’s hard to copy her – if she’s wearing a new style of dress that hasn’t been released in fast fashion yet.

I like to buy cheap versions of her outfits. She works with some of the biggest fashion designers in the world, so they would be really expensive to buy brand new – and a lot of them are made just for her.

I have a big walk-in wardrobe at home and I keep all my 'Kim clothes' in one area, as an archive of what I've worn.

I have to keep on top of her make-up and hair trends too, she could step out with long braids one week and a short bob the next, so it’s really hard to adapt. And it can be costly buying hair extensions. 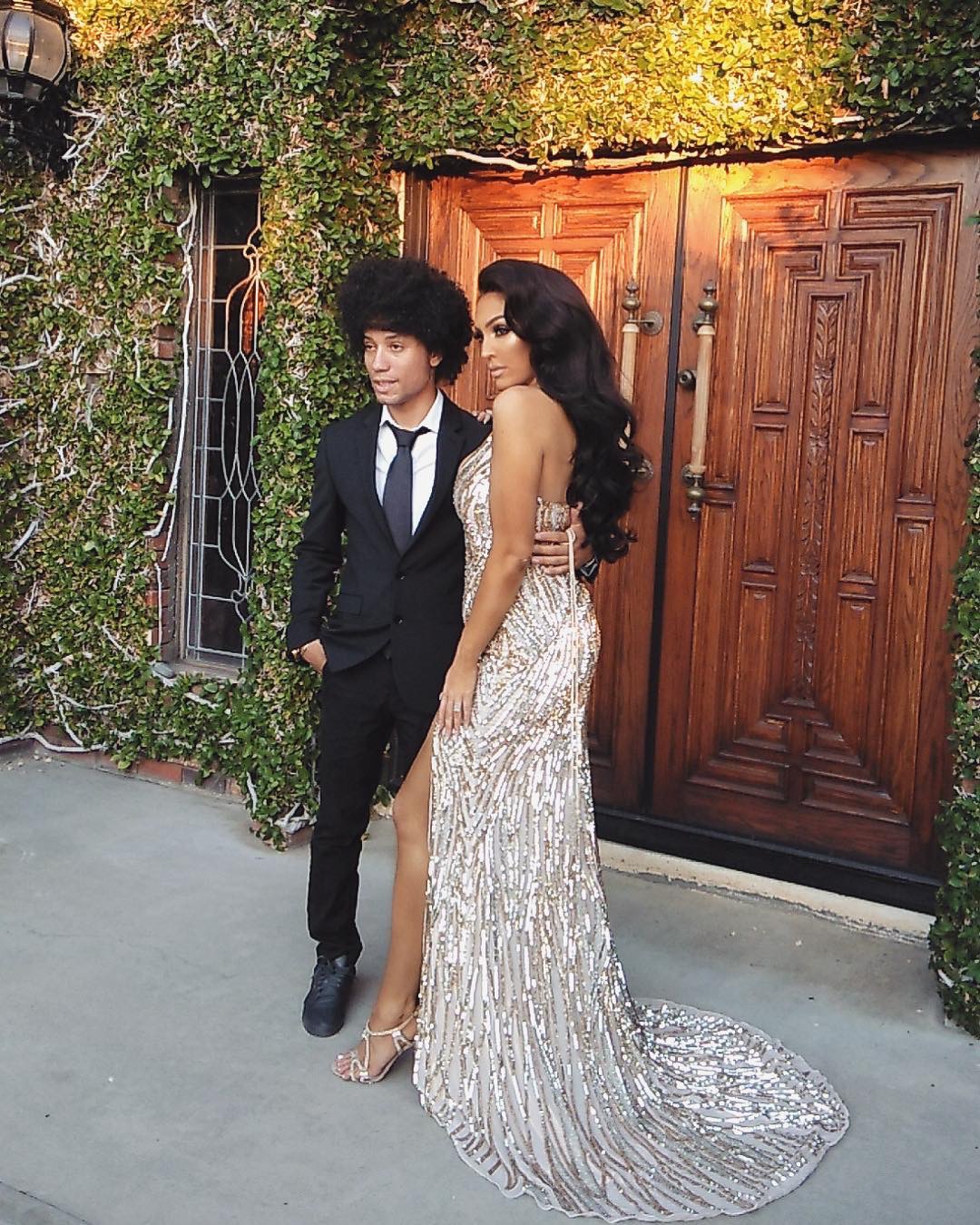 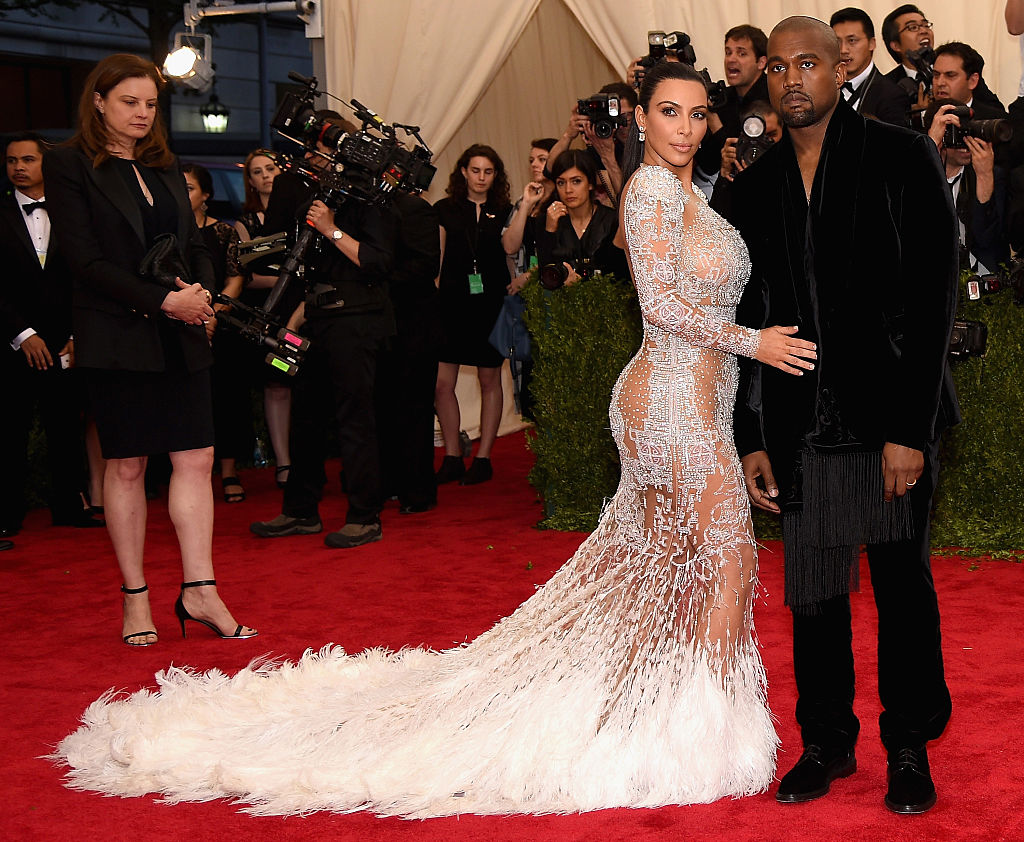 I get three or four hair pieces a year, I don't want to be constantly cutting or dying my own hair.

I was a beauty influencer before I was ever recognised as a lookalike, so I already had loads of make-up and get a lot of freebies. Kim's KKW line is one of my favourites.

To get ready in full Kim K glam takes three to four hours. Then you still have to take pictures

To get ready in full Kim K glam takes about three hours. And it can take longer than that, a look I haven’t done before takes up to four hours. Then you still have to take pictures.

When I’m going out to look like Kim K in public, it takes me all day to get ready. It's a regular thing for me, just so I can keep up with my make-up technique.

I always dress like her, because I love her style, so I'll go out wearing a body suit with joggers or something and people will be screaming "hey, Kim Kardashian!"

I get that pretty much every day. It doesn't stop no matter where I go and whatever I wear, because I still look like her. 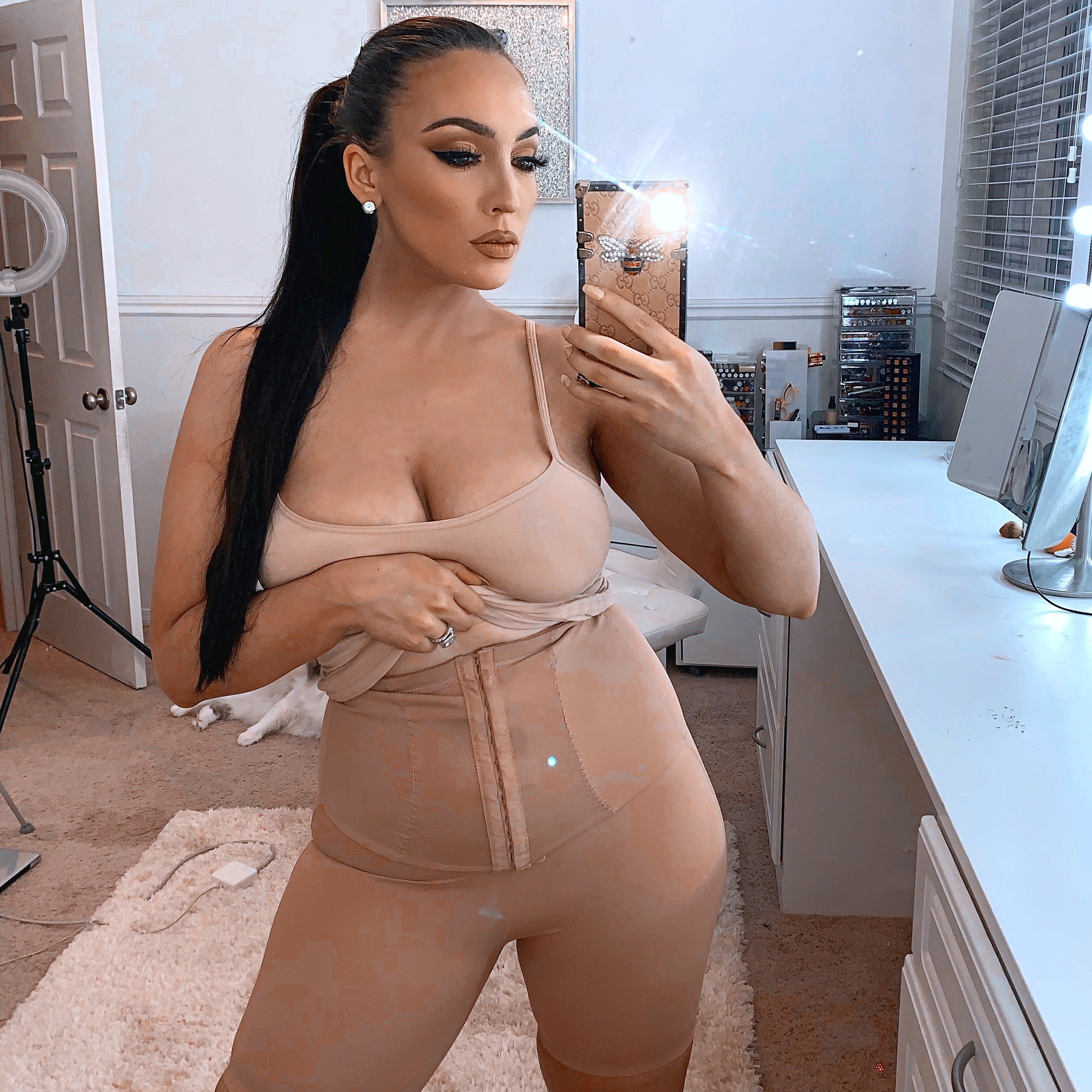 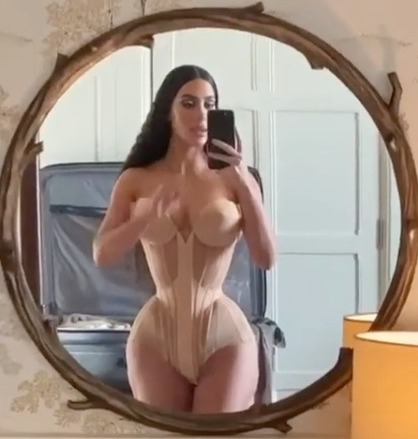 On days when I've dressed up for pictures and happen to go out, I get a lot of attention. And I live in a small town, so when I go to central LA it's even bigger.

Whenever I leave the house, I make a conscious effort to do my hair and make-up in Kim’s style.

People can't believe we're not related – I say "I'm Italian/British, the Kardashians are Armenian" – but it's really crazy to witness how people react.

Whenever I leave the house, I make a conscious effort to do my hair and make-up in Kim’s style – and I get a lot of attention

Sometimes people ask for selfies and somebody once asked me to come to their family member’s birthday party as Kim. People really love it.

I definitely take it as a compliment, she's really beautiful and my aim is to look like her.

I've always loved Kim's business ethic, I feel like I've watched her evolve from endorsements and ad campaigns to launching her own make-up line and shapewear. 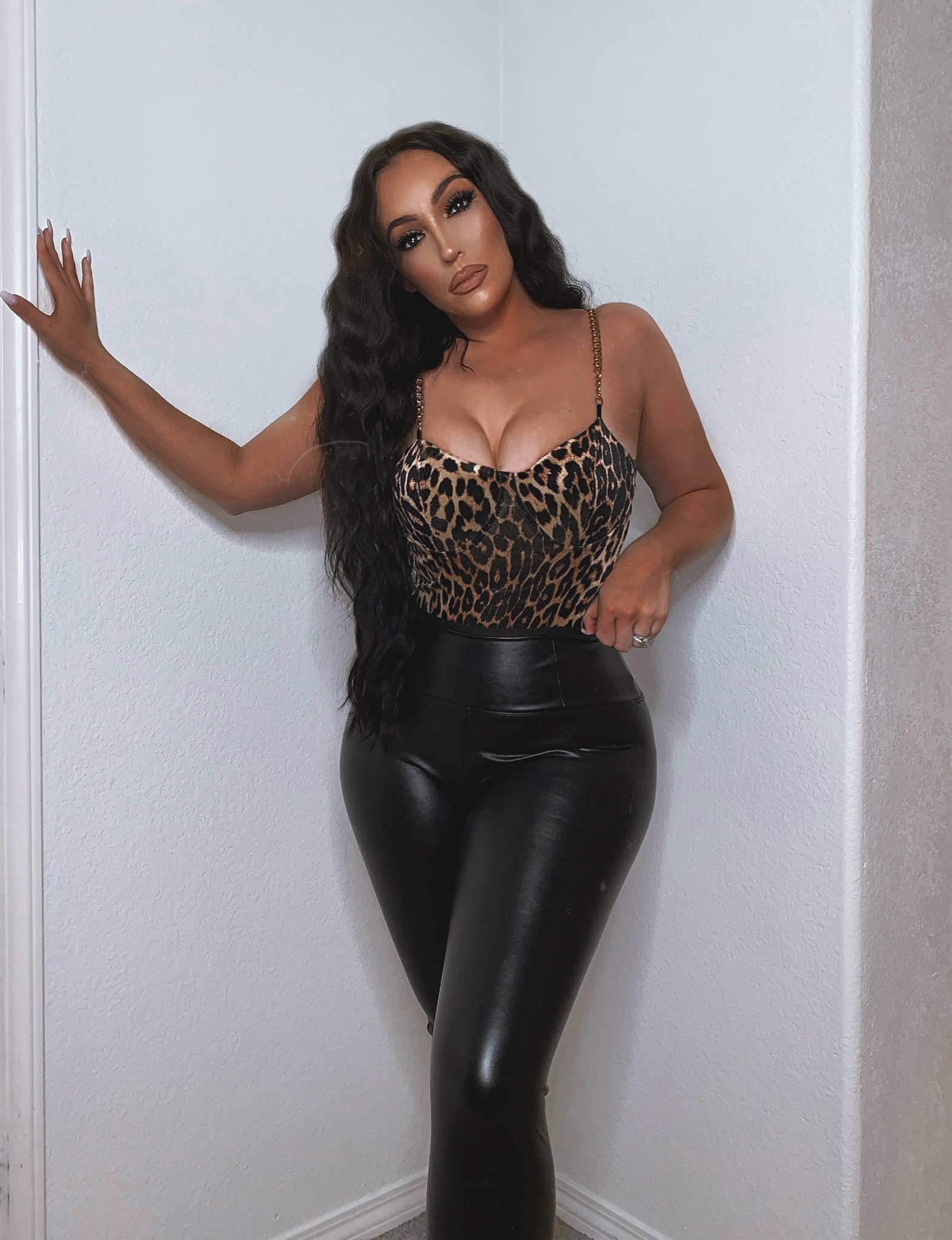 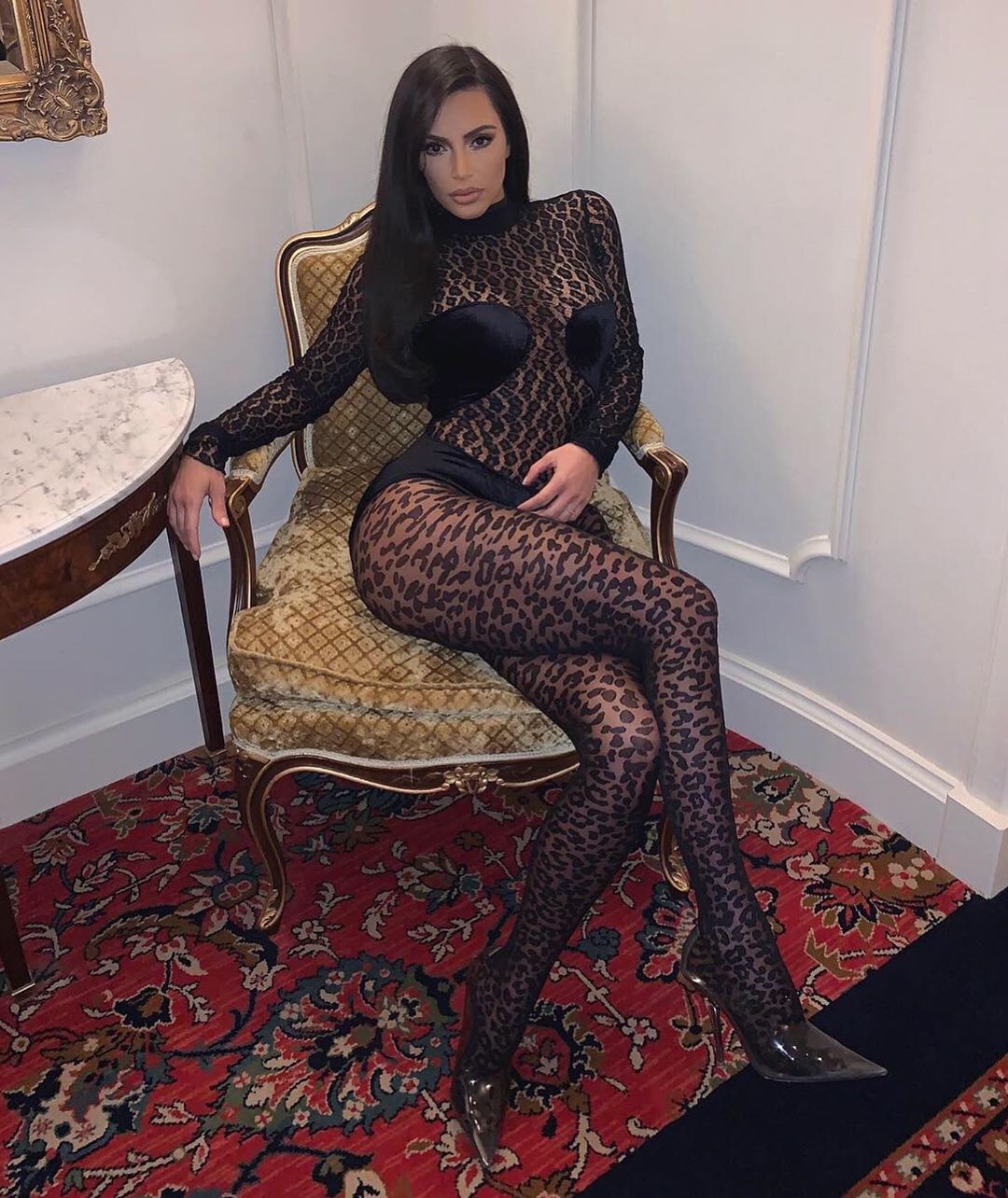 I've had opportunities from being her lookalike too. I'm a beauty influencer first, that's my main job, but since I've honed in on Kim's look that's become a business in itself.

I've never done any paid appearances as a Kim K lookalike, but I wouldn't say no.

6am: wakes up to transform herself into Kim Kardashian

There's a lot of work that goes into this. Before Covid, I was getting facials on a regular basis. I've had blue light therapy and started getting Botox a year ago.

I'm constantly researching the treatments she's had done, although some of them are too pricey for me.

I tried fillers once too but I’ve never had any plastic surgery to look like Kim, that’s what makes me different from her other lookalikes. 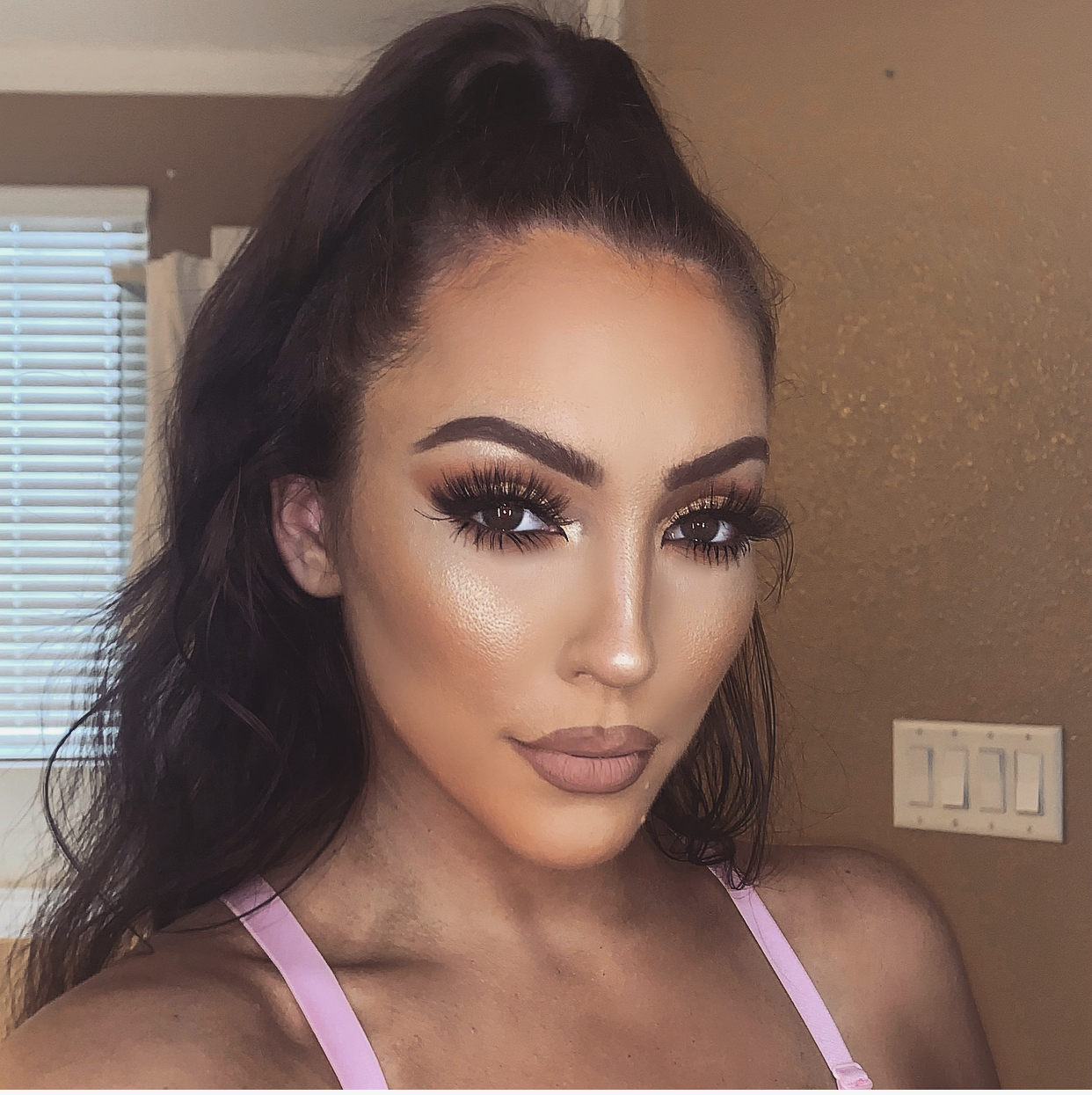 So excited for the Classic Collection!! The 10-Pan Eyeshadow Palette, 4 New Lipsticks & 4 Lip Liners launch at the #KKWBEAUTY Pop-Up on 07.25 and online on 07.27 at 12PM PST on KKWBEAUTY.COM

So excited for the Classic Collection!! The 10-Pan Eyeshadow Palette, 4 New Lipsticks & 4 Lip Liners launch at the #KKWBEAUTY Pop-Up on 07.25 and online on 07.27 at 12PM PST on KKWBEAUTY.COM

Kim's really toned her body in the last two years, which is a big motivator for me.

I lost 60 lbs a couple of years ago, which changed my whole life, and I have more of a Kim-like shape now.

I’ve never had any plastic surgery to look like Kim, that’s what makes me different from her other lookalikes

I also use waist trainers, which helps me maintain her hourglass figure.

I'm always wearing a waist trainer, I have three different types – one which I use when I workout to enhance sweat and tone, one I wear during the day if I'm not leaving the house, and my Skims one that I wear under some outfits, it's more easy to conceal.

Kim's look is constantly evolving and I have considered plastic surgery, but I wouldn't want to go under the knife before I've had kids. 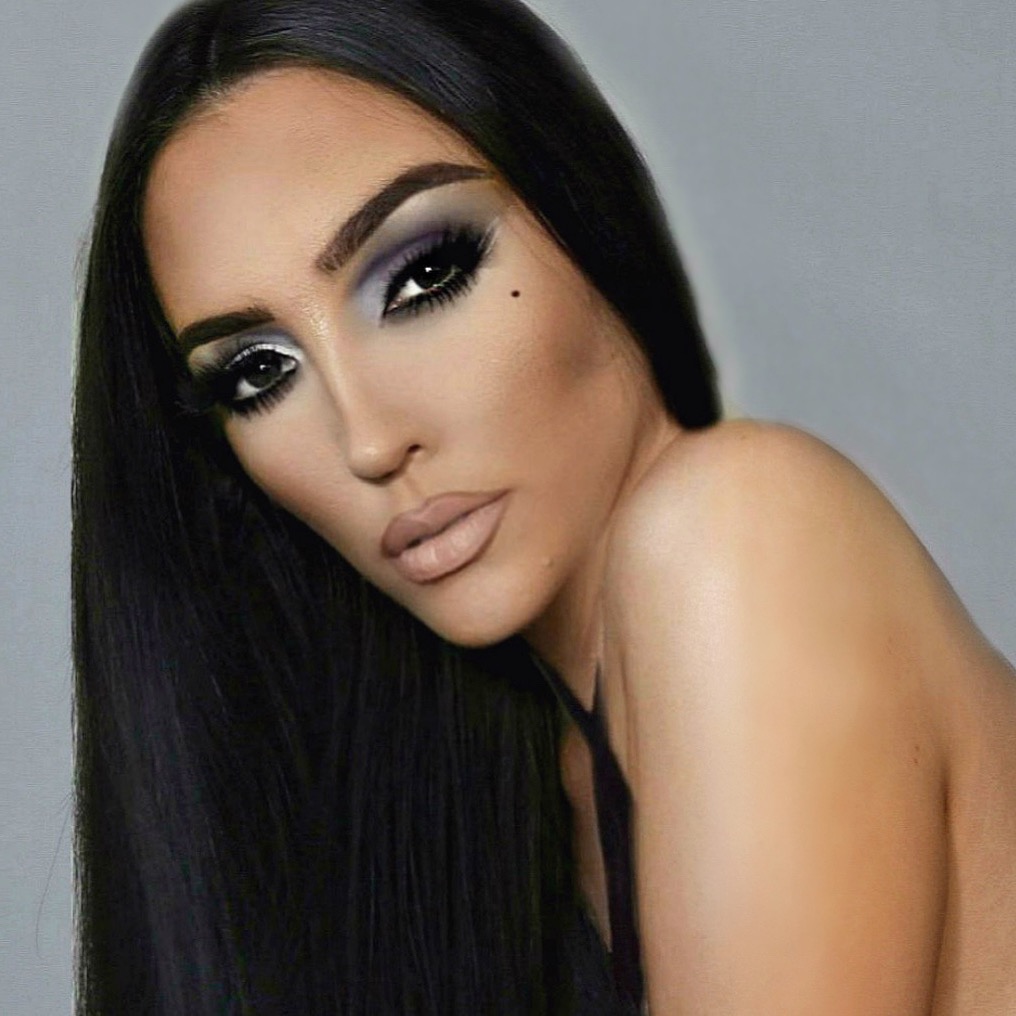 I'll try to avoid it if there's a non-surgical alternative, but I'm not opposed to getting work done in the future.

I’ve done ad campaigns before for BH Cosmetics which were shown nationwide and I’d love to start my own make-up brand one day, although I'm also a singer.

My husband, Aundre Pipkin, 32, an entrepreneur, is very supportive. He's been the driving force in everything I do and he loves that I look like Kim.

His humour is very similar to Kanye West's. He does remind me of him, they have a similar style, but they're different in lots of ways too.