It Took Them a Couple Years to Become a Pair

The night Noah Wunsch met Kelly Connor there were more pants in the room than people.

It was February 2015. Mr. Wunsch and Ms. Connor had each traveled from New York to Los Angeles for work. Mr. Wunsch, who had a job in business development for the cool-kid fashion magazine Bullett, had flown west to meet advertisers. Ms. Connor, then an editor at Vogue, was there to host a party celebrating a collaboration between the magazine and the denim empire Levi’s. (The collaboration included a pair of jeans designed by Ms. Connor.) She and Mr. Wunsch were strangers staying in the same hotel.

By chance, Mr. Wunsch ran into a mutual friend, another Vogue editor, in the hotel lobby. That friend invited him to the jean junket.

“I remember walking into the party and seeing a really beautiful, tall blonde woman at the top of this little terrace area saying hello to people,” Mr. Wunsch said. “I turned to my friend and I was like, ‘Who is that?’”

“That’s Kelly,” he remembers being told.

That was followed by some swift, frank advice: “Don’t even think about it.”

Hopes dashed, Mr. Wunsch wandered about the party, among walls adorned with Manhattan-storefront-style displays showcasing pants — little denim altars. Mr. Wunsch did briefly speak to Ms. Connor. But he ended up spending much of the night kibitzing with Ms. Connor’s aunt, another party attendee who had been only informally invited, and who like Mr. Wunsch felt a bit out of place. 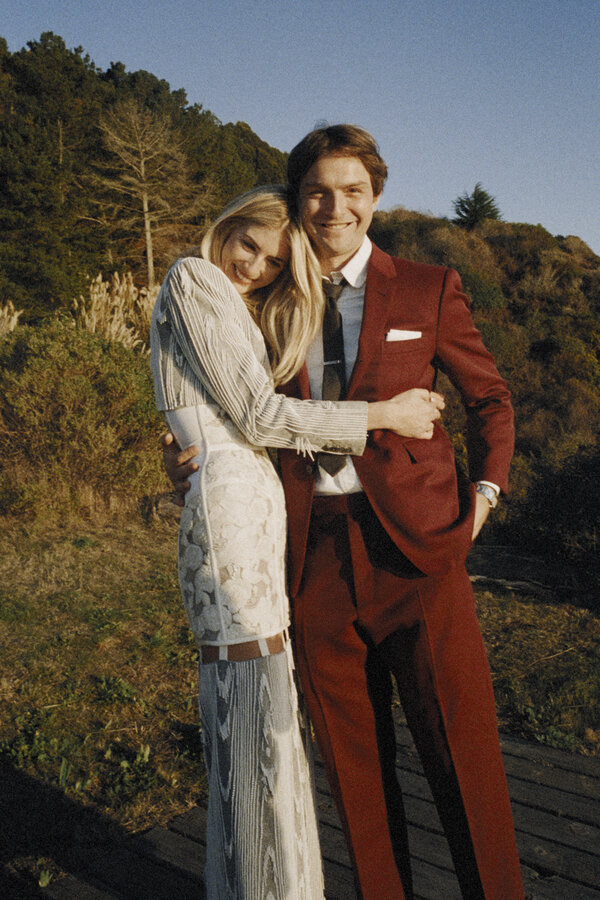 That could have been the beginning, middle and end for Mr. Wunsch and Ms. Connor. But they remained in each other’s peripheries in the years that followed, crossing paths once in a while through mutual friends. Several of these friends were aware of Mr. Wunsch’s feelings for Ms. Connor. Less publicized was the fact that these feelings were, to an extent, mutual.

“I definitely thought of him after that meeting randomly, wondering where in the world that Noah went,” Ms. Connor said.

One day in 2017, Mr. Wunsch received some rousing news: Ms. Connor had called off her engagement. (This was for reasons unrelated to him.) Actually, he heard the news several times. “I think I had like five people text me being like, ‘It’s off,’” he said.

Mr. Wunsch recalled having a mixture of hopeful excitement and resignation: “There were two feelings simultaneously — ‘This is fantastic and, also, it has no baring whatsoever on my life because that woman is so far out of my league.’”

He didn’t know that Ms. Connor had been admiring him, too.

In November 2017, the two crossed paths again, this time at a Thanksgiving celebration hosted by a mutual friend. Around 18 people were gathered around a long table, shoulder to shoulder (in the literal sense — the dinner was in an apartment on Manhattan’s Lower East Side). Ms. Connor and Mr. Wunsch ended up next to each other. Flirtatious teasing gave way to Mr. Wunsch asking Ms. Connor what she had been reading lately (Clarissa Pinkola Estés’s “Women Who Run With the Wolves” — she loved that he asked), which was followed by Mr. Wunsch taking on D.J. duties through the stereo.

“When you put your playlist on for a party you kind of like are bearing your soul and a lot of embarrassing songs can pop up,” Ms. Connor said. “I just loved that confidence.”

The next day, she invited him to her birthday party. They’ve been together since.

Ms. Connor, 32, now the global director of brand relations for the fashion brand Thom Browne, and Mr. Wunsch, 31, a former senior vice president at the auction house Sotheby’s and now the founder of Ruby Hibiscus Water, a beverage start-up company in New York, were married Nov. 30 in an outdoor ceremony at Wind and Sea, a private estate in Big Sur, Calif. The wedding was officiated by Pippa Bianco, a friend of the couple who became a Universal Life minister for the event. Ms. Connor is taking the groom’s name.

Shortly after their wedding, Ms. Connor reflected on the jean release party where she and Mr. Wunsch met. It was true that hosting duties had made her anxious. But she now recognizes a second factor that helped put her on edge that night.

“Honestly,” she said, “I think Noah made me a little nervous.”