Royal fans were delighted to see so much of the Duke and Duchess of Cambridge‘s three children during the Queen’s Platinum Jubilee celebrations.

SEE: From grumpy, to cheeky, to overjoyed: Prince Louis’ 7 best moments at the Queen’s Jubilee

From Prince Louis‘ mischievous antics in the royal box, to Prince George‘s and Princess Charlotte‘s adorable twinning outfits, we loved all the Cambridge children’s moments from the historic weekend – but have you seen this viral video of Princess Charlotte shaking a royal fan’s hand?

A video posted by TikTok account @the_blazing_royals capturing the sweetest moment between Prince William, George and Charlotte in Wales on Saturday has amassed over 1.4million views.

An onlooker films as Prince William shakes their hand, followed by a confident handshake from eight-year-old Prince George.

Princess Charlotte is the cutest in royal fan’s unseen video

The video then captures seven-year-old Princess Charlotte catching the eye of the person filming, hesitating, and then proudly shaking their hand as she beams at the camera.

LOOK: Princess Charlotte is the new hair queen – check out her plaits!

Royal fans were quick to react to the royal tot’s adorable moment, flooding the comments with messages about her model behaviour.

“Charlotte is so mature and takes her role in the royal family so seriously. She’s another [Princess] Anne. A strong woman she will be,” wrote one fan, as another penned: “Charlotte reminds me so much of the Queen…uncanny.”

“Love that they both looked the person in the eye as they shook hands, such lovely manners,” penned a third fan, “Charlotte is so poised, confident and polite,” added a fourth.

The trip to Wales marked the siblings’ first official visit to Wales, Kensington Palace said. The royals made the trip to preview rehearsals for a musical concert held in celebration of the monarch’s 70 year reign. 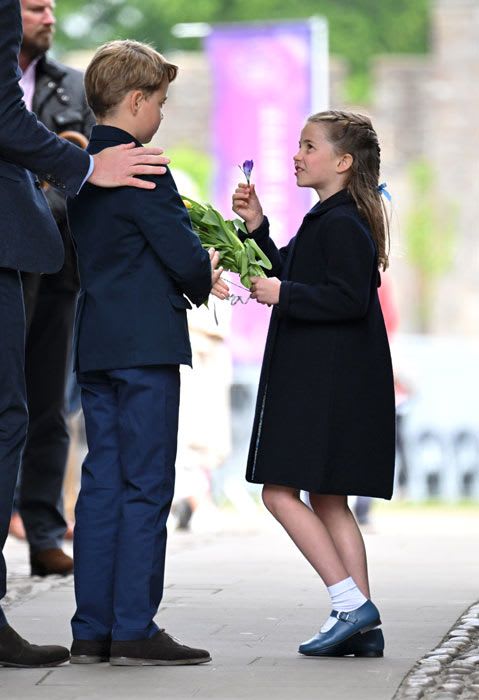 Prince George and Princess Charlotte looked overjoyed as they enjoyed the rehearsals alongside their parents. Prince Louis, four, was likely too young to attend the engagement.

Make sure you never miss a ROYAL story! Sign up to our newsletter to get all of our celebrity and royal news delivered directly to your inbox.