Home » Beauty and Fashion » ‘Ridicule’: The French Reaction to ‘Emily in Paris’

‘Ridicule’: The French Reaction to ‘Emily in Paris’

PARIS — The old story of the American ingénue who moves to Paris, succumbs to the city’s sensual pleasures (usually by way of a French lover) and masters its hardened customs (never smiling at strangers) is a perennial crowd-pleaser — if the crowds are American, that is.

Parisians, however, like to rail against the clichés about their city as the world’s epicenter of romance. So as soon as Netflix released a minute-long trailer for“Emily in Paris,” a series created by Darren Star and starring Lily Collins that is being billed as the Gallic-themed heir to “Sex and the City” and that will premiere on Oct. 2, some French commentators went on the attack.

“Between the beret, the cocktail dresses and the impeccable streets, Parisians had a hard time recognizing their everyday life,” RTL, the French radio station, wrote on its website. Les Inrockuptibles, a French magazine that likes to hate American popular culture, wrote that Parisians were already laughing at the show.

But when I showed excerpts from 10 episodes to more than a dozen Parisians from the ages of 22 to 81, they elicited more nuanced impressions. Slightly more nuanced.

The overwhelming response was “ridicule” — French for ridiculous and absurd, as well as comical and amusing.

“Ridicule” that Emily Cooper, a 20-something social media wiz from Chicago, played by Ms. Collins, would unexpectedly find herself responsible for teaching a Parisian luxury marketing firm (clients: a perfumer who is a thinly disguised Frederic Malle and a couturier who is a cross between Karl Lagerfeld and Christian Lacroix) how to improve their Instagram and Twitter game. 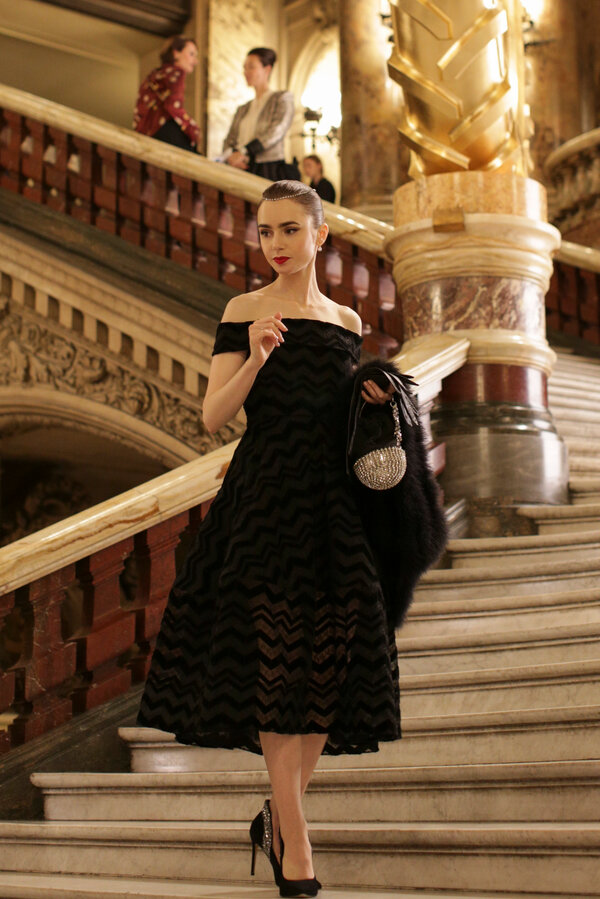 “Ridicule” that Emily arrives to every scene in a different pair of stiletto heels and flashy pret a porter ensemble that couldn’t possibly fit onto the streets of Paris — or into her budget.

“Ridicule” that Philippine Leroy-Beaulieu, who plays Sylvie Grateau, the head of the firm, publicly insults and belittles Emily with artful malevolence, not, as many French might do, behind her back.

And most “ridicule” of all, that Emily speaks no French, and relied on a translation app on her cellphone. “They never work,” said Caroline Valentin, the owner and director of an atelier that creates hand-embroidered and beaded costumes for the theater.

“The clichés are so many and so concentrated that they pile up like a collection of little stories that become comical in their exaggeration,” said Philippe Thureau-Dangin, 65, the owner and director of Exils, a small French book publishing firm. “Maybe the creators of the series are trying to mimic Molière. Molière also exaggerated and created impossible situations for comic effect.”

Mr. Thureau-Dangin chuckled when the middle-aged outgoing director of the French company greets Emily with a warm “bise” — kiss on each cheek. “That bise would never happen in an office of professionals on a first meeting,” he said. “It’s a little too direct, no?” The director also happens to be smoking a cigarette. “And smoking — without asking permission?” Mr. Thureau-Dangin added. “That would never happen either, especially as you can’t smoke in French offices anymore.”

Another thing viewers thought would never happen: an advertising shoot of a lean blond Serbian model strutting across the Alexandre III bridge for a perfume campaign. She is naked, except for the scent she wears. Emily, acutely aware of the #MeToo movement, objects to the campaign’s sexism. The French perfumer, backed by Emily’s female boss, calls it, rather, “sexy.”

“It’s a parody of the nudity they used in publicity 20 or 30 years ago!” said Léo Bigiaoui, a 29-year-old videographer. In 2016, after Paris City Hall released a short film showing the city’s picturesque icons — the Eiffel Tower, the Louvre, bridges over the Seine — Mr. Bigiaoui and his partner Maxime Baudin countered with their short video “Paris We Love You Too.” It showed everyday life: a man fishing, a full-hipped woman jogging and working-class shoppers in outdoor food markets. .

“I could never, ever imagine a shoot of a naked woman on a bridge over the Seine,” Mr. Bigiaoui said. “This really sucks!”

France’s version of #MeToo, #BalanceTonPorc (#ExposeYourPig), has made advertisers and marketers more cautious about how they use sex as a selling tool. “I wouldn’t try to sell perfume with a video showing a naked woman trying to excite men,” said Florence Coupry, a 33-year-old executive in a top French strategic communications firm. “This has nothing to do with being French. A campaign like this would backfire.”

Still, Ms. Coupry believes the exaggeration of the stereotypes was intentional “This is a series about extreme clichés, cliché after cliché,” she said. “Whoever made this is clearly having fun with the clichés. As viewers, we’re being played with here.”

For Ms. Coupry, the series is a feed of color-saturated Instagram posts come to life. “Remember, the word ‘cliché’ means picture, and Emily is the queen of Instagram pictures, of online ‘likes,’” Ms. Coupry said. “She is obsessed with wanting to be ‘liked’ in real life, even by her very mean boss.”

Yet one thing about that mean boss rang true for many viewers: When Emily asks Sylvie why she doesn’t want to get to know her, Sylvie replies, “You come to Paris. You walk into my office. You don’t even bother to learn the language. You treat the city like it’s your amusement park. And after a year of food, sex, wine and maybe some culture, you’ll go back to where you came from.” There is a certain native reluctance to befriend Americans who come and go.

And yet I can relate to Emily. I first moved to Paris from Chicago as a foreign correspondent for Newsweek when I was in my late 20s, with no friends, imperfect French and an apartment with a close-up view of the Eiffel Tower. The other correspondents in the bureau (older men) treated me with tolerance or barely concealed contempt.

Within a year, I was on an Air France chartered plane with an aging ayatollah to Iran, where he made his revolution. I survived professionally by leaving the country. My sheepskin coat and Sorel snow boots from Chicago, no use in Paris, were perfect in Tehran.

I learned that sometimes the clichés are true.

And that is what makes “Emily in Paris,” at times, fun. Some viewers saw the series as refreshing escapism from the pandemic. In real-life Paris, masks are mandatory in all public places; bars close at 10 p.m.

“The series started out cringe worthy, but gets better,” said Arthur Back, a 22-year-old volunteer for an NGO that resettles political refugees. “I might watch it with friends as a pick-me-up. Any kind of distraction is good these days.”

Elaine Sciolino’s most recent book is “The Seine: The River That Made Paris.”