She Gets Paid Just to Humiliate Her Fans

For four days, she and six friends swam in the warm Caribbean waters, went zip-lining in the Mayan jungle and dined on fresh lobsters and tequila at boho-chic restaurants.

Whenever she wanted money, she said, she would set up her iPhone on the coconut-filled beach and command her online suitors to chip in.

“Tulum has been amazing thus far. Keep funding my trip!” she posted to her Twitter followers in late January, along with her CashApp handle and a 15-second video showing off her curvaceous bikini body, bright red fingernails and flowing dark tresses.

Soon, she said, money began flowing into her account. “Please take all of my money for your trip, I don’t deserve it,” wrote Betaboy10, who gave $500, according to screen shots she provided to The New York Times. Another, named SubMike00, sent $250. A user who goes by Peter Zapp sent $400, along with the message: “I’d do anything to be owned by you.”

“It’s controlling someone through their wallet,” said Mistress Marley. (The Times agreed to identify her only by her professional name to prevent stalkers from finding her.) “I love waking up every day realizing that submissive men pay all my bills and I don’t spend a dime.”

In its purest form, financial domination is not transactional. Sending money is the kink, and finsubs offer tributes without expecting anything in return. “The arousal is in the act,” said Phillip Hammack, a professor of psychology at the University of California, Santa Cruz and the director of its Sexual and Gender Diversity Laboratory. “It’s about that loss of control.”

“So many people are thriving off of this industry online,” she said. “I know this because I’m thriving.”

‘Who Wants to Buy Me Lunch?’

Mistress Marley earned a master’s degree in fashion marketing in 2018. While she was in school, she worked casually as a so-called sugar baby, an arrangement in which one person — usually younger — is supported financially by a partner, or “sugar daddy.”

After graduation, she found a job in fashion as a buyer for a large corporation. But when she wasn’t earning as much as she’d hoped, she Googled: “How to make money as a woman online.”

Among the first search results was a 2013 Vice article, “Financial Domination Is a Very Expensive Fetish,” about a Pennsylvania woman named Cleo Tantra who said that financial dominatrixes like herself could make “a few thousand a month.”

A week later, she created a Twitter account with her new nom de findomme — Mistress Marley — and posted a simple message with no photo: “Who wants to buy me lunch?” Two days later, she said, she received her first tribute: $25 from an anonymous CashApp user.

The more Mistress Marley posted (not just on Twitter, but also on Instagram, OnlyFans and Patreon), the more money flowed. She uploaded seductive videos of herself in a black corset, dancing to Megan Thee Stallion. She snapped photos of Fendi purses and other gifts. She met finsubs in person and recorded the interactions.

But the most scandalous part of this stunt was at the other end of her leash: a middle-aged white man whom she said she met a few days earlier on FetLife, a social media platform for the B.D.S.M. community.

She walked the man across the campus like a dog, stopping occasionally to pat his balding head. A video shows onlookers gawking and snapping photos. One attendee shared a video on Twitter with the caption: “She brought her sugar daddy to homecoming.” Mistress Marley reposted it with a correction: “That’s not my sugar daddy, it’s my sub LOL. He pays for me to control him.”

Mistress Marley also puts her performance in a larger historical context. “For me, especially as a Black woman, I see my financial gains as reparations, because the majority, if not all of my clients, are white men,” she said.

By morning, the video had amassed over three million views, and her inbox was flooded with requests from finsubs and women who wanted to learn more about financial domination. Among them was King Kourt, 33, a medical data analyst and part-time secretary from Cleveland. (That is her professional name, which The Times agreed to use for safety concerns.) “I saw her video and instantly thought: ‘I want to walk a white man on a leash,’” she said.

Mistress Marley invited her to join Black Domme Sorority, a collective she started to help Black women navigate the world of financial domination. The group hosts brunches, charity events, sex tutorials and safety classes. This made her the face of this kind of work, resulting in attention like a profile in Paper magazine.

“Findom feels safe because it’s online, and there’s no sex involved,” said King Kourt, who joined the sorority and said she now makes about $2,500 a month from 10 finsubs.

While many practitioners are women (and their subs male), there are male findoms who cater to men. “I’m bisexual, but for me, it’s not about that,” said a 28-year-old “cash master” in Buffalo who works as Ted Smith. “If you’re not enjoying the power struggle, then why are you doing this?”

There are also nonbinary findommes like Goddess Ambrosia, 24, a former chef and activist from Salt Lake City, who uses the pronouns they and them, and appeals to male subs.

“In the capitalist society we live in, money is so fetishized, especially by men,” they said. “Men are taught from a very young age that they need to be breadwinners and they need to provide for women, for their families.”

“As a nonbinary person, to be able to take that power away from men really subverts those expectations,” Goddess Ambrosia added.

Regardless of gender or sexual orientation, financial domination is ultimately about power.

“It’s a power exchange, just like in B.D.S.M., only it’s without ropes or chains — it’s with money,” said Joe Kort, a sex and relationship therapist and co-director of the Modern Sex Therapy Institutes in West Palm Beach, Fla. “The money is, in fact, the chains, because dommes are tying up subs financially. The eroticism for the subs comes from feeling owned.”

Cult Clare, 25, a TikTok creator from Brooklyn, dabbles in findom whenever she wants to feel bossy. “I really do enjoy the control,” she said. “It’s empowering, particularly as women, because we’re taught to constantly undervalue ourselves. Findom really gives you a space to say, ‘No, I’m worth this much, and if you can’t pay that, then get away.’”

I Need to Hand Over Everything

Giving away your hard-earned money may seem counterintuitive or unpleasant, like paying off credit cards and student loans. But for finsubs, who are also known as “pay pigs,” it is liberating and titillating.

That was something that one submissive, a manager of a Dallas nonprofit who goes by the online alias R.J., discovered about himself in the late 1990s, when he was trolling an AOL chat room for white supremacists. One day, R.J., now 56, said, he got into an argument with a man from Mississippi, who later sent R.J. a private message saying that he knew where R.J. lived and threatened to send friends to beat him up.

R.J., who was granted anonymity because he believed he would be fired, panicked and pleaded for forgiveness. The user instructed R.J. to list his valuables, and when R.J. mentioned a new inkjet printer, the user told him to send it. He balked at first, but the stranger was unrelenting. At his day job, R.J. leads a large team and he found the idea of ceding control surprisingly appealing, so he took the printer to the post office.

Over the next months, R.J. said, he also mailed a scanner, Zip drive, digital camera and CD player. Then he started sending money. Each time, the user would belittle R.J., calling him pathetic and a loser. R.J. was hooked.

“As a sub, I have this need, this fetish, to hand over everything,” said R.J., who is gay and single, and estimated that he has spent more than $150,000 on dozens of cash masters since he started. “It’s this feeling of giving up complete control, of someone having ownership over you. I find that really arousing.”

The feeling is echoed by other financial submissives. “This idea of giving their money away, and not knowing what’s going to happen — it’s the ultimate surrender of power, and it’s very liberating for them,” said Dr. Hammack, the psychology professor.

Dr. Hammack said that financial domination can help people struggling with control issues. “I believe that findom can actually be a really healthy way to manifest the part of human nature that is about power asymmetry and hierarchy,” he said. “It becomes a context for healthy growth and development.”

Financial domination is helping Charlie, 29, a sales manager in Ohio, identify as a transgender woman, even as she presents as a man in her “vanilla” life, she said. King Kourt, her findomme, has full access to one of her bank accounts, she said, and as part of a “consensual blackmail” arrangement, King Kourt threatens to expose Charlie as a woman in exchange for money.

The idea, both said, is to encourage Charlie to live as she wants in public as well as private.

Giving up financial control may also help some finsubs become more empathetic. William M., 31, a technology manager for a school system, said that he spends $300 a month on Queen Astro, 31, a findomme from Los Angeles. Every time he sends money, she publicly belittles him on Twitter or degrades him on Skype.

“I used to be much more self-centered,” William said. “As I’ve explored this fetish, I’ve definitely become more aware of other people, their feelings and putting them before myself,” adding that he sacrifices personal comforts like new winter boots and an air-conditioner to keep his findomme satisfied. “My domme definitely comes first,” he said. 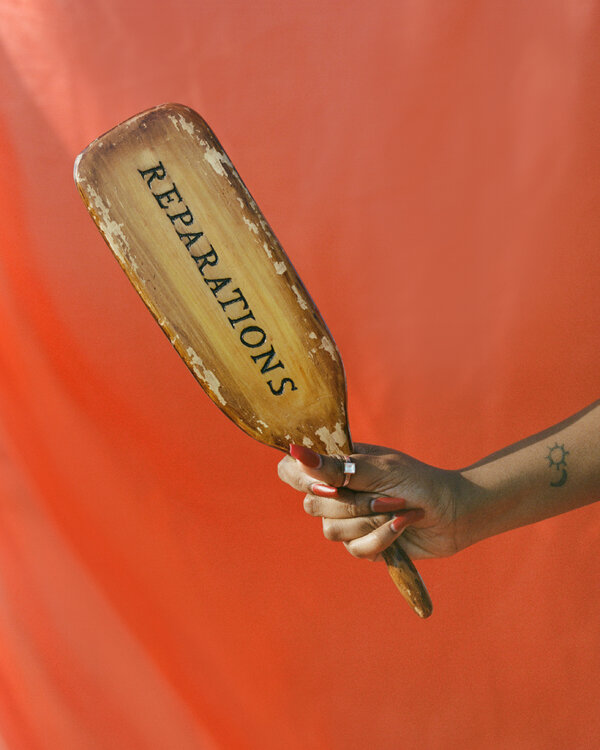 Unlike in most marriages, however, there is a persistent fear that a findomme could steal one’s entire savings. And that’s part of the appeal.

Still, Dr. Kort believes that most findom relationships are safe, likening the fetish to an expensive hobby. “If I’m into golf and golfing is important to me, I will wait to spend money on other things, but I’m not going to go broke buying golf clubs,” he said. “It’s the same for subs. The majority are in charge of what they’re spending.”

Mistress Marley would agree. She recounted one draining session she held last July, with a sub who says he is a college student from Boston. She said she wore a black bra and leather corset, logged onto Skype from her Harlem bedroom, and almost immediately received $50 on CashApp.

She said she then ordered him to get on all fours, which he did, while he sent another $100. “Good piggy,” she said to him. “Now double it.”

She said then picked up her phone and scrolled through Instagram, like a bored teenager. When she looked up, she saw another $200. The submissive bowed his head, she said, averting eye contact. “I’m not worthy, Mistress,” he said.

With every insult — “Pathetic” “You’ll never be able to touch this” — the submissive sent another $100 until the total hit $1,000, which took about five minutes. She said that at the end, she snapped her laptop shut without saying goodbye and posted a screen shot of her new CashApp balance.

“I’m never quitting my job,” she wrote in the caption.