The Easter Parade That Could Not Be Stopped

A lingering pandemic may have put a halt to the traditional New York Easter parade, the gaudy cavalcade that, in other years, winds ribbonlike along Fifth Avenue from 49th Street to 57th Street. But little blunted the spirits of visitors gathered outside St. Patrick’s Cathedral in Midtown to celebrate a ritual that is to many minds the most festive and joyous of the year.

The absence of an official procession didn’t keep most from embracing Easter Sunday as a moment of emotional reset, a time to step out after months of seclusion and make the most of a season that has taken on a special poignancy. 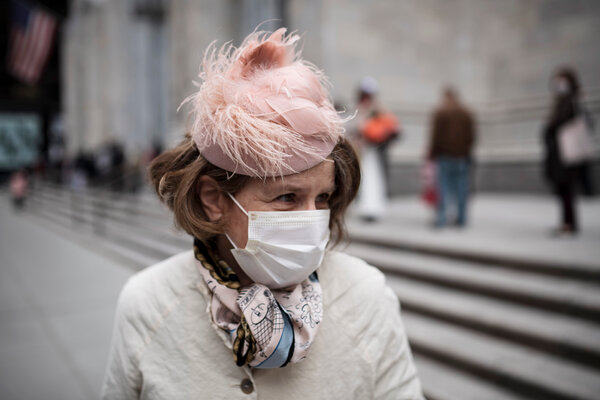 “I wasn’t expecting a return to normal,” said Mary Anna Smith, who was strolling the avenue in a feathered pillbox from her hat line the Tipsy Topper. She was excited, just the same, to pick up hints of the colorful spectacle that has marked Easters past. “I came hoping to see a large enough crowd, one that could maybe will New York back to its old self,” she said.

A gathering of photographers worthy of a red carpet gala seemed to share that sentiment. They lined the curb and swarmed the sidewalk, cameras hoisted to capture the scene. Their subjects preened obligingly, fanning out their plumage on the church steps, turning this customarily solemn setting into a multitiered impromptu runway.

Most were masked, but few were shy, the majority eager to show off a giddy assortment of candy-tone coats, flowery frocks and engineer-striped waistcoats, their outfits crowned by straw boaters and, here and there, a feathered cloche or floppy derby covered in peonies, tiny chicks and skeins of dense foliage that might have been plucked from a ripe country garden.

“Especially after this really horrific year we’ve all had, any excuse to reflect a little hope on the horizon will make this Sunday special,” said Mary Higham, a meeting and events consultant in Manhattan. Ms. Higham was determinedly cheery in a pink and white gingham J. Crew coat, her ensemble topped by a fat, sparkly headband.

“For such a long time we have needed to to out, to walk the streets and go to restaurants,” said Hervé Pierre, the fashion designer. Mr. Pierre marked time as he waited for the 10 a.m. mass to begin in a striped vest, tan jacket and jaunty Italian straw hat. A sprig of radish was fixed to his lapel. He was celebrating a sense of release, Mr. Pierre said: “We are wearing masks, we are following the rules. We feel safe to come out, and, more than that, we feel liberated.”

Lockdown, he hoped, would soon be well behind us. “You know what?” he said briskly. “We are done.”