Former Oscar winner Uma Thurman came to slay! The actress is set to present during tonight’s broadcast — and once again redefined Oscar fashion.

Uma Thurman is a film icon — and showed up looking like it at the 2022 Oscars! The 51-year-old walked the red carpet in a contemporary look that was entirely own, going with a silk, white button up shirt paired with a long black silk skirt by Bottega Veneta. The outfit was understated elegance, keeping the rest of her look simple with the shirt buttoned up all the way, opting for just a bit of bling with large diamond leaf earrings accented with an emerald. 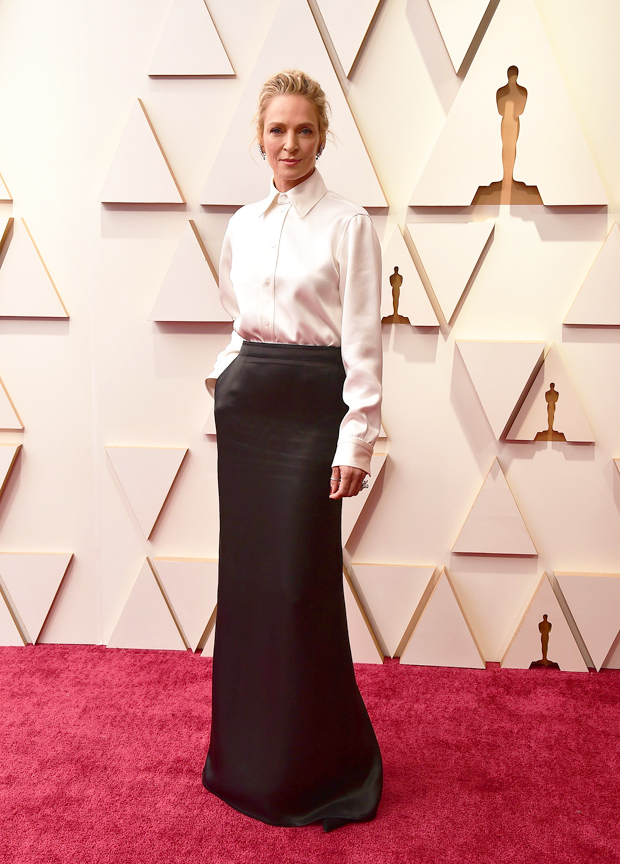 The blonde kept her hair back into a loose, slightly messy bun that only Uma could pull off at the 94th Oscars. The acting legend is set to present during the show, and we can’t wait to see how her unique outfit looks on stage.

The Boston native is no stranger to the Academy Awards, earning a 1995 nomination for Quentin Tarantino‘s iconic film Pulp Fiction. The cinematic masterpiece, in which she played character Mia Wallace, is considered Uma’s breakout role. Uma lost in the Best Supporting Actress category that year to Dianne Wiest in Bullets Over Broadway.

Beyond being nominated for an unforgettable film role, Uma also parlayed a new era of red carpet fashion back in 1995. The blonde opted to move away from the more traditional, ornate gowns generally worn by actresses for the show — going with a simple lilac colored Prada gown topped with a white chiffon wrap. The slip inspired dress added a bit of sparkle at the bottom, but embraced the ’90s minimalism trend.

The ensemble, styled by Barbara Tfank, was also one of Prada’s first major red carpet moments — helping to put the brand on the mom for years to come. 1995 also marked the release of Prada’s sleek leather tote which is part of their latest vintage re-release.

This year, Uma is one of the many A-Listers set to present at the Dolby Theatre. The 94th Academy Awards marks the return to full fledged award shows since the COVID-19 pandemic.