What's with all the chatter about the new photo of Meghan and Harry? Well, it's their first portrait since quitting full-time royal duties in April. It was taken to promote a Time100 talk that occurred early on Wednesday, Australian time, about "Engineering a better world", discussing social media and misinformation – subjects the pair has been speaking a lot about since their move to the United States.

There's something oddly familiar about the photo. Taken by black photographer Matt Sayles for Time, the portrait mimics the pose the couple took in their 2017 official engagement portrait, which was taken by Alexi Lubomirski.

They both look a little… different than we're used to. Since moving to California, there has definitely been a "softening" of the couple's appearance. Harry's face seems to have relaxed, and if I'm not mistaken, I do believe there's a bit of West Coast swagger in his posture.

But we're really here to talk about Meghan, right? Where to start!

Shall we get the hair out of the way first? Definitely. It's the easy one. It's longer, looser and more wavy than we have seen it compared to other Zoom appearances she has made throughout the pandemic. Maybe she scored one of those whiz-bang Dyson Airwrap things for her birthday in August? 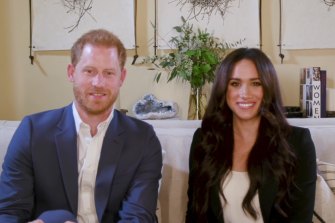 Meghan and Harry during the Time100 Talk webcast, which they filmed from their Californian home.Credit:Time

I think I have seen that jacket before. Not so fast. While some reports were adamant the jacket is a favourite Alexander McQueen one of the duchess', the fashion sleuths at several fan blogs that forensically analyse Meghan's every outfit disagree. They say the pockets and lapels don't quite match the McQueen. In any case, Meghan has definitely been dressing down since leaving royal life, trading gowns like the Ralph & Russo one she wore in the engagement photo for flowing dresses and open-neck shirts. 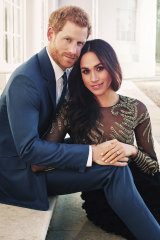 Enough about her clothes, let's talk jewellery! As you wish but again, I hate to disappoint you, there is some conjecture. The best we can tell is that the gold watch appears to be the late Princess Diana's Cartier Tank Francaise, which Meghan has been wearing more since the big move to California. But here's where it gets a little tricky: Meghan already owned the same watch, in a different colourway, before she met Prince Harry. She has previously said she bought it as a gift to herself when her former TV series, Suits, was renewed for a third season.

So it could be Diana's watch? Possibly. All we know is that Harry reportedly inherited the watch after Diana's death, whereas Prince William took her famous diamond and sapphire ring, which he gave to Kate Middleton for their engagement. 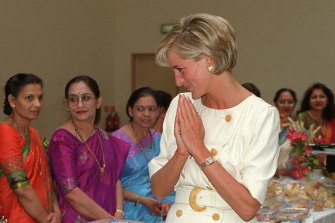 Princess Diana wearing the Cartier watch that many say Meghan has been sporting lately.Credit:Getty Images

Speaking of rings, what's that on Meghan's pinky? Well spotted. Reports say it's a custom design by Lorraine Schwartz, the same jeweller who remodelled Meghan’s engagement ring in early 2019.

Meghan seems to be quite the stylist. Of course. Prior to meeting Harry she ran a lifestyle blog called The Tig, and she seems to have put some personal touches on their couple's new multimillion-dollar home in Montecito, part of Santa Barbara.

We've been seeing a bit of the house during COVID-19. Indeed. Only during the webcast of the Time100 talk, there seems to be some new additions on the mantle, including a very large crystal. Meghan is known to be a fan of crystals and mystical jewellery, and has been spotted several times wearing evil-eye pendants. As for the three "nest" artworks in the background, they are from Los Angeles-based and start from $US60 ($85) a piece.

Most Viewed in Lifestyle