Hulu’s holiday rom-com Happiest Season has unexpectedly caused a ton of debate on Twitter after its premiere, but the one thing everyone seems to agree on is that Aubrey Plaza was the highlight of the film. As the self-assured doctor Riley, Plaza’s signature dry humor and seriously electric chemistry with Kristen Stewart caused most viewers falling for her, hard. If you are one of the many people who loved her buzzy performance, there are a ton of other shows and movies starring Aubrey Plaza you should check out next.

Right after Happiest Season premiered on Nov. 25, Plaza became a trending topic on Twitter as fans expressed their love for her character Riley. In the flick, Abby (Stewart) struggles to pretend she’s straight while spending the holidays with her girlfriend Harper’s (Mackenzie Davis) family, since Harper is not ready to tell her parents she’s gay. Upset at having to lie about her true self, Abby finds a much-needed ally in Riley, Harper’s ex who also had to deal with a lot of hurt due to Harper’s resistance to coming out. Since the two really hit it off while Harper pushed Abby away, a lot of viewers were hoping Abby and Riley would end up together, but alas, that didn’t turn out to be the case.

Happiest Season was a more dramatic turn for Plaza, who is best known for her comedic work since getting her start in improv and sketch comedy at the Upright Citizens Brigade. To see more of Plaza’s work, here are some of the best TV shows and movies she’s appeared in: 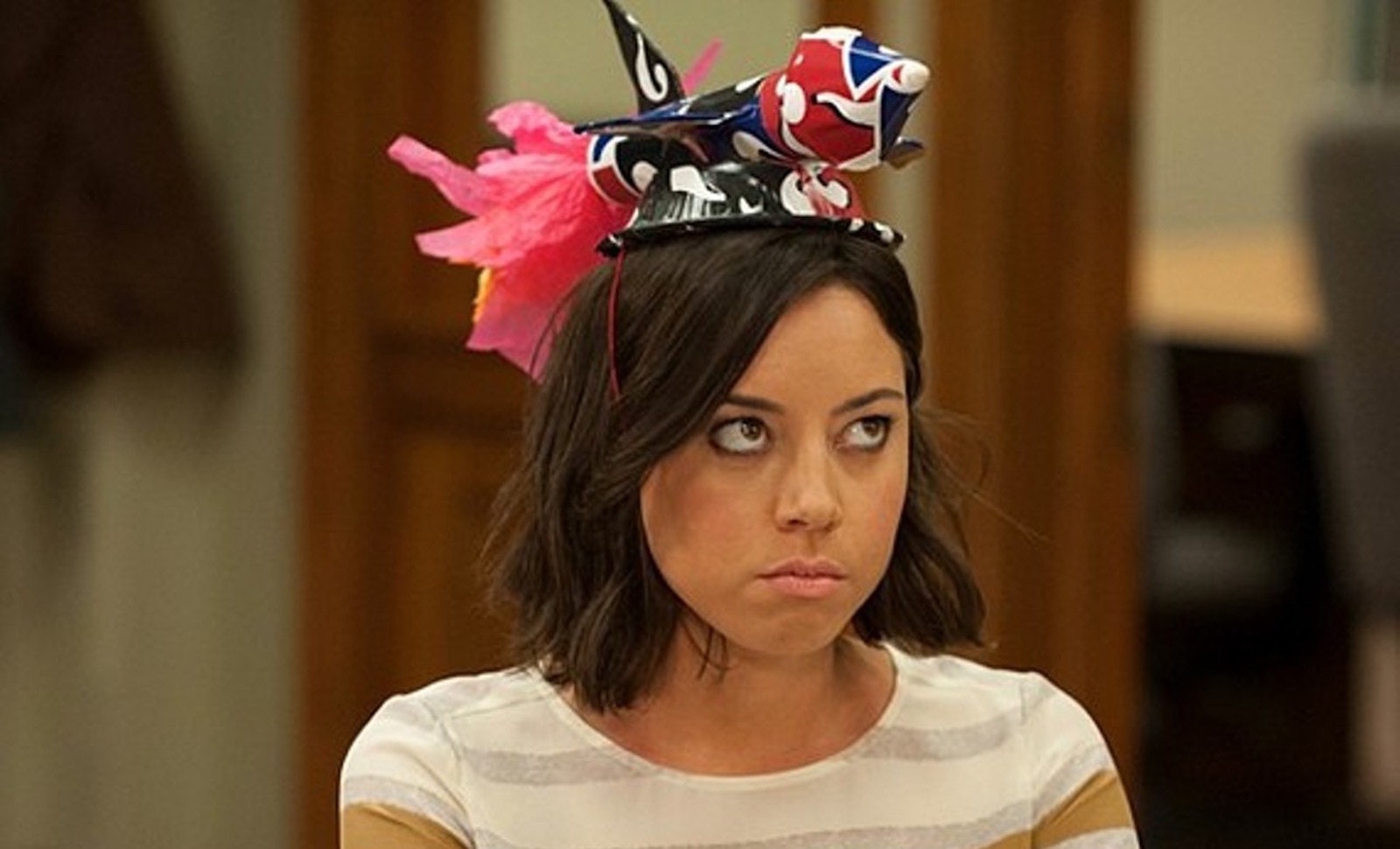 Plaza’s best-known role is undoubtedly the surly intern-turned-assistant April Ludgate in Parks and Recreation. The apathetic Parks Department employee made Plaza’s deadpan sense of humor her signature trait, as April served as a hilariously dark foil to Amy Poehler’s overly perky Leslie Knope. You can stream all seven seasons of Parks and Recreation on Peacock.

In the first movie she was featured as the lead actor, Plaza plays a reporter who becomes involved in a questionable time-travel plan after coming across a ridiculous newspaper ad. It’s a quirky rom-com that proved Plaza could helm a movie, making it a must-watch for any fans of hers. You can stream Safety Not Guaranteed on Netflix. 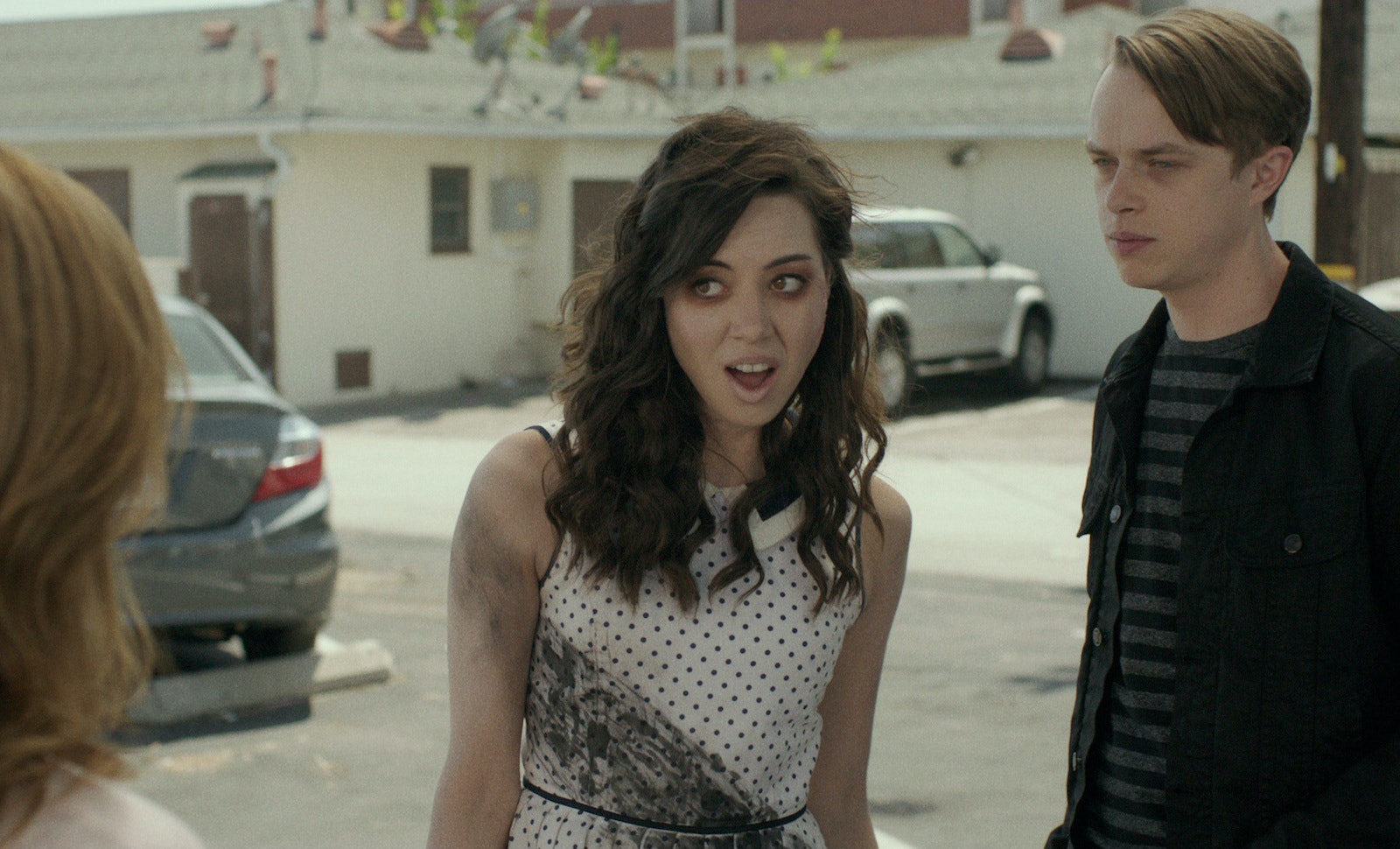 Leave it to Aubrey Plaza to star in one of the most hilariously morbid rom-coms ever. In Life After Beth, Plaza plays the titular Beth, who mysteriously returns from the dead as a zombie to rekindle her relationship. You can rent Life After Beth for $2.99 on Amazon Prime Video.

A lot of people became familiar with Plaza from Parks and Recreation, and Welcome to Sweden is the perfect follow-up watch for fans of the beloved sitcom. Created by and starring Amy Poehler’s brother, Greg Poehler, the comedy series features Plaza as a fictionalized version of herself who constantly finds ways to toy with the main character Bryce (played by Greg). You can stream Welcome to Sweden on Pluto TV.

Plaza let down her hair to play a wild spring breaker in the blockbuster comedy Dirty Grandpa. The raunchy flick’s A-list cast also includes Robert De Niro, Zac Efron, and Zoey Deutch, and it features one of Plaza’s wildest romances ever as her character falls for De Niro’s character. You can rent Dirty Grandpa for $3.99 on Amazon Prime Video.

While you won’t see Plaza’s face in this hit animated series, the character she voices, the apathetic but extremely dangerous Water Tribe princess Eska, is unmistakably a perfect fit for the actor. You can stream The Legend of Korra on Netflix. 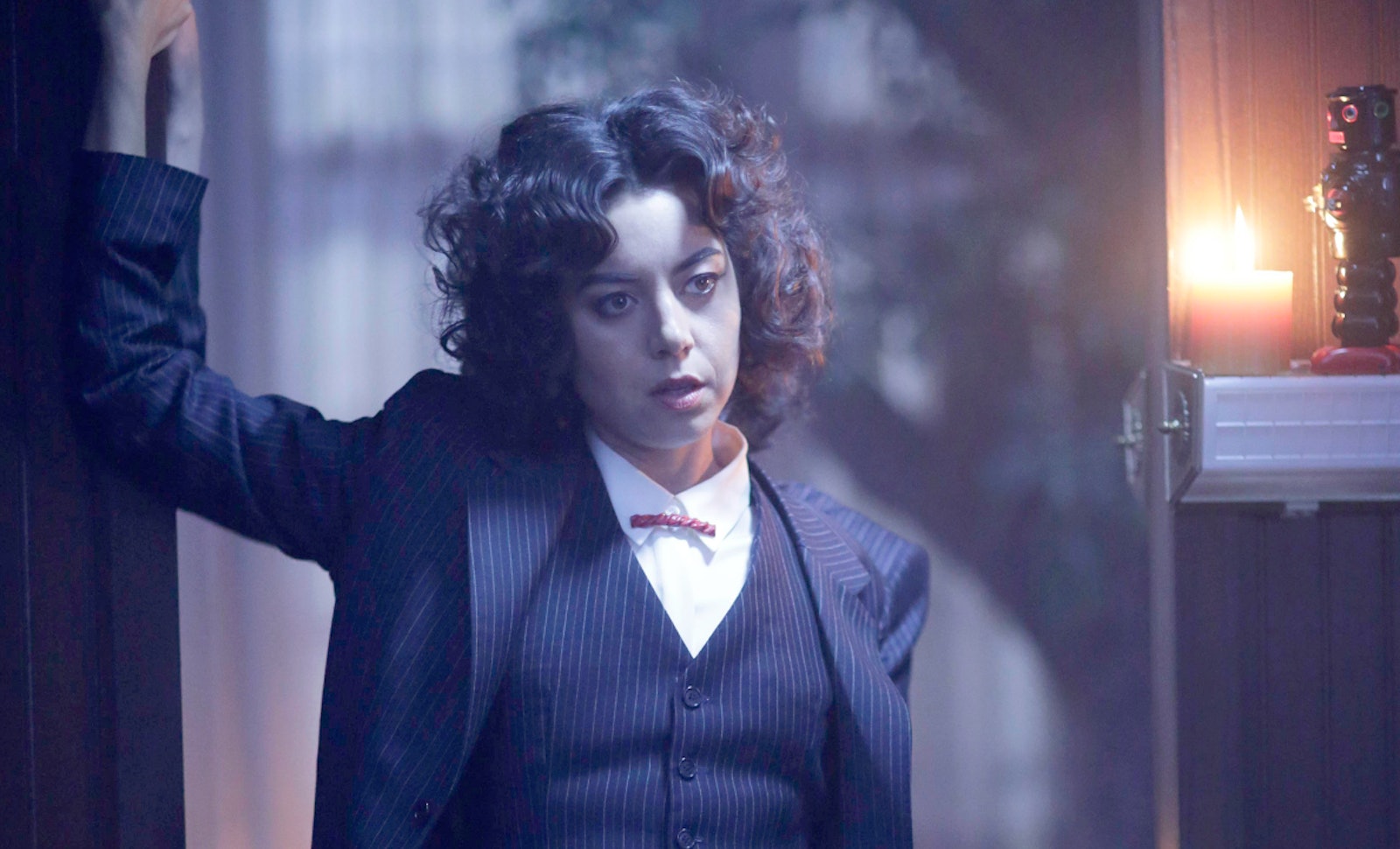 In what is easily her trippiest role ever, Plaza plays the dead friend who haunts David Haller’s mind in the psychological thriller superhero series Legion. As Lenny, Plaza delivers some seriously wild monologues and rocks next-level looks throughout the series. You can stream Legion on Hulu.

Plaza’s feature film debut came in the 2009 detective comedy Mystery Team, in which she played a teenager whose parents had both just been mysteriously murdered. The movie actually features a ton of big names in some of their earliest roles, such as Donald Glover, Ellie Kemper, and Ben Schwartz. You can stream Mystery Team for free on Tubi TV or Plex.

Plaza’s other big raunchy comedy besides Dirty Grandpa re-teamed her with Zac Efron, and it also saw her working with her frequent costar Anna Kendrick once again. Based on a real Craigslist ad that went viral, Mike & Dave Need Wedding Dates stars Plaza as a slacker party girl who pretends to be a put-together schoolteacher in order to get the free vacation that comes along with the wedding invite. You can stream Mike & Dave Need Wedding Dates on Hulu.

One of Plaza’s earliest movie roles featured her in an all-star ensemble cast full of the biggest names in comedy. In it, she plays Daisy, a stand-up comedian and the longtime crush of Seth Rogen’s character. You can stream Funny People on Hulu. 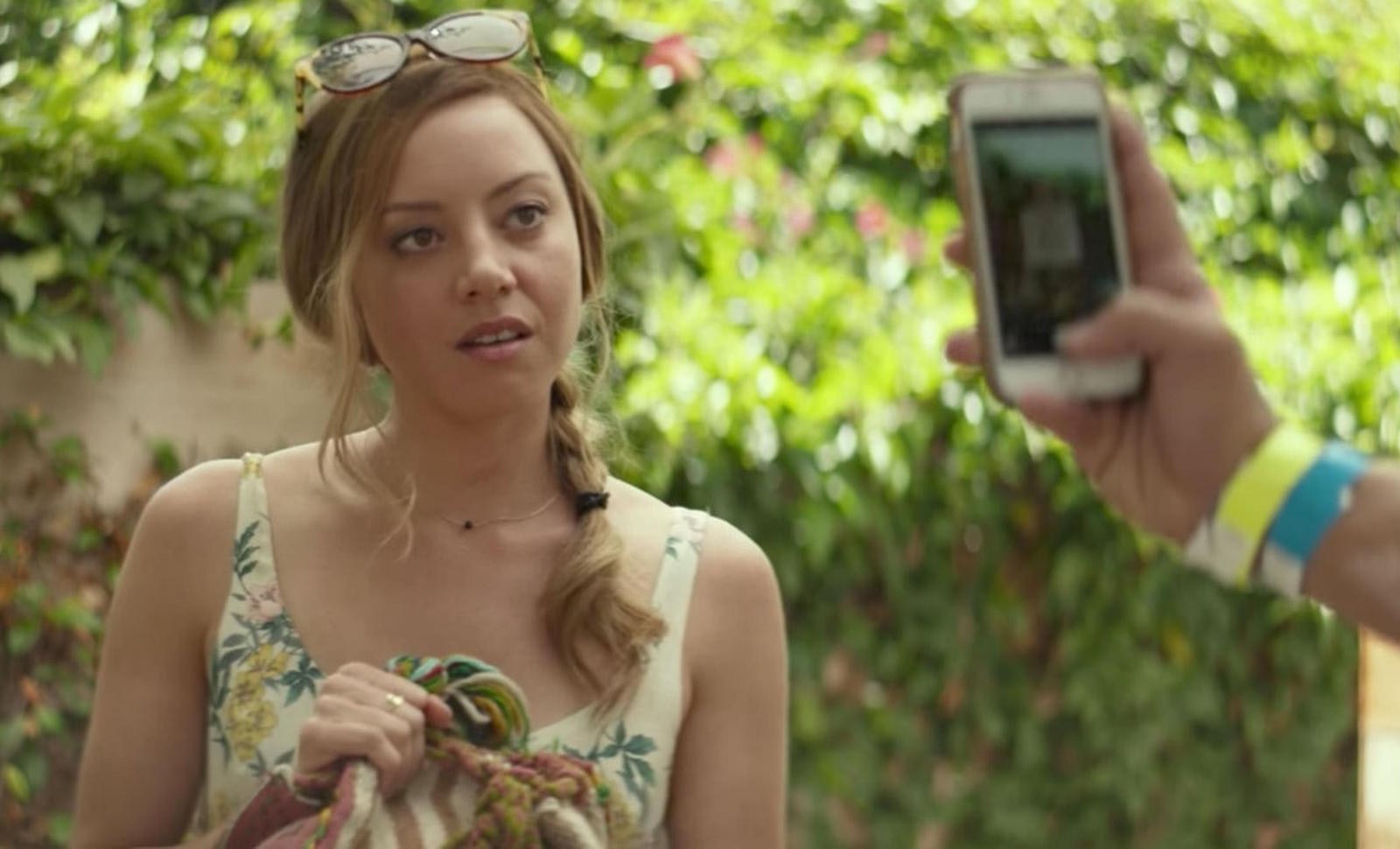 Stories about the damaging effects of social media have been a hot topic in recent years, and one of the best movies to tackle it is Ingrid Goes West. Plaza plays the titular character, who becomes so obsessed with an Instagram influencer that she uproots her whole live in order to get close to her. You can stream Ingrid Goes West on Hulu.

Probably Plaza’s most serious project to date, About Alex is a drama centering on a group of friends who get together after one of them (Alex) attempts suicide. In the film, Plaza plays Sarah, a corporate lawyer who is unhappy with her life. You can stream About Alex on Amazon Prime Video.

For diehard fans of Plaza, you can see her first TV acting role ever in Season 1, Episode 7 of 30 Rock. Plaza plays an NBC page in the episode, which is a job she actually had at the time. You can stream 30 Rock on Peacock.

Plaza became a scream queen in 2019, when she starred in the reboot of Child’s Play. She plays the mother of a boy who receives an animatronic doll, which begins to terrorize the family and everyone around them. You can stream Child’s Play on Hulu. 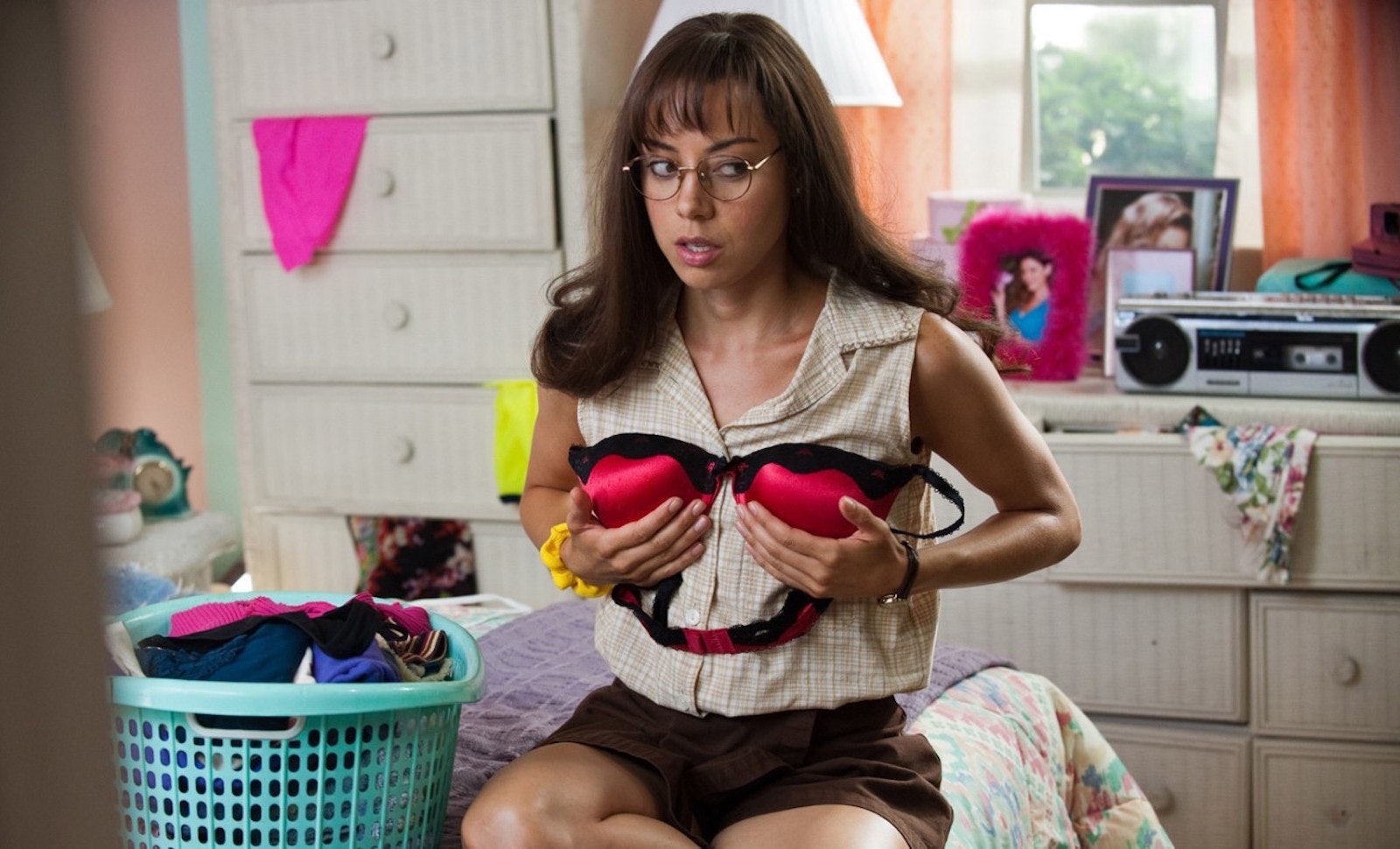 Plaza tapped into the mind of every awkward high schooler for her rom-com The To Do List. She stars in the film as Brandy, an overachiever who resolves to spend the summer after her high school graduation completing a list of sex acts in order to prepare her for college. You can rent The To Do List on iTunes or Google Play for $3.99.

Plaza has been in a number of ensemble movies full of impressive names, but none can top the 2011 high school reunion flick 10 Years. Plaza plays the wife of one of the reunited classmates in a film that also stars the likes of Channing Tatum, Jenna Dewan, Chris Pratt, Oscar Isaac, Rosario Dawson, and Kate Mara. You can stream 10 Years on YouTube or Amazon Prime Video.

While Plaza can nail any genre, dark comedies are definitely her forte, and that is on display in Addicted to Fresno. In it, Plaza plays a personal trainer who takes a romantic interest in Natasha Lyonne’s character Martha in the movie about a pair of contentious sisters. You can stream Addicted to Fresno on Peacock or Amazon Prime Video.

Plaza pops up in this Chris Evans-led rom-com as a friend of Evans’ character who helps him talk through his unfamiliar feelings of love. The movie boasts a star-studded cast alongside Plaza and Evans, including Luke Wilson, Anthony Mackie, Ashley Tisdale, and Topher Grace. You can stream Playing It Cool on YouTube, Hulu, Peacock, or Amazon Prime Video. 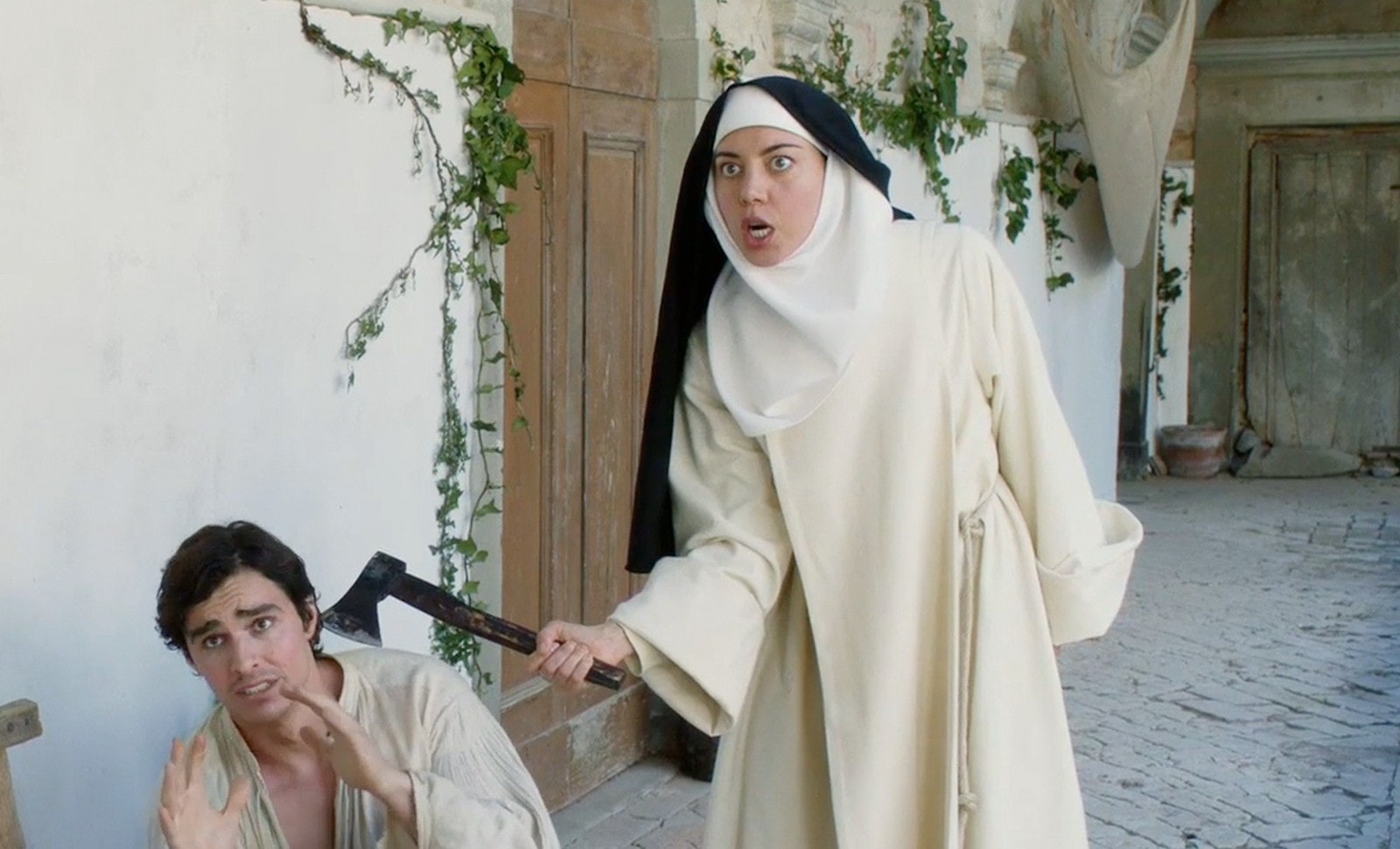 Plaza is at her silliest in her 2017 medieval comedy The Little Hours, playing an Italian nun with a penchant for violence. The quirky convent comedy also features Alison Brie, Dave Franco, Molly Shannon, and Fred Armisen. You can rent The Little Hours for $1.99 on Amazon Prime Video.