Home » Celebrities » ‘Absolutely not!’ Carole Baskin rules out any future plans to stand for political office

‘Absolutely not!’ Carole Baskin rules out any future plans to stand for political office 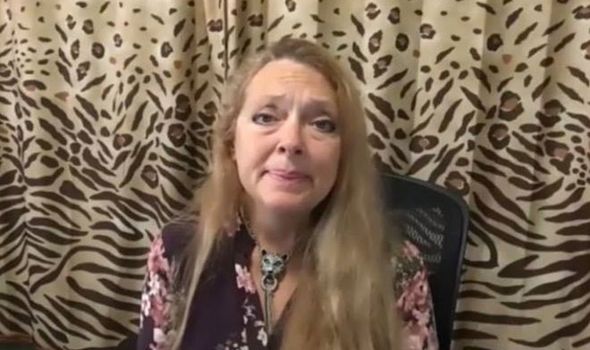 Carole Baskin gives update after volunteer was bitten by tiger

The CEO of Big Cat Rescue commented on speculation she would one day move into politics, telling Express.co.uk: “It was one of the weird questions that one of the producers of Tiger King, Eric Goode, asked a hundred times during the five years he was filming it.

Mrs Baskin said: “I was like no, no and no, I care about the political realm as far it pertains Big Cats and protecting them, but I don’t even want to think about dealing with people’s healthcare or the economy or any of that.”

This comes after Carole Baskin’s rival Joe Exotic, 58, previously made a failed attempt to run for US president in the 2016 election.

Exotic also made an unsuccessful campaign for the primary election for Governor of Oklahoma in 2018 for the Libertarian Party.

Joe Exotic is currently serving a sentence of 22 years in jail after being convicted of trying to hire two different men to kill animal rights activist Carole Baskin and for violating wildlife laws.

There is still around 7,000 tigers living in the US in zoos or privately owned, which is nearly double the number of wild tigers worldwide.

Mrs Baskin has fought to end the private ownership of big cats in the US.

The Big Cat Public Safety Act would prohibit the private ownership of big cats in America.

When asked about the progress of the bill, she said: “It finally passed with a two-thirds majority in the House last year, but it was in December and we just couldn’t get it on the Senate calendar in time.”

Mrs Baskin is hopeful the bill will pass this time around. She added: “We introduced it in January and when we launched it in the Senate it was the first time, we’ve ever had bipartisan support.

“That makes me think we are really going to get this done this time, we’ve already got 198 co-sponsors in the House, so it’s really moving.”

When asked how she would like to be remembered one day, Mrs Baskin told Express.co.uk: “The one thing I want to leave as a lasting legacy to this planet is that we saved the big cats in time.

“I just want that to happen, we need to do the things right now to stop the private ownership so we can save them in the wild.”