Clay Aiken got in an expert dig at Donald Trump on Twitter, telling the president he tried to get someone to find him ‘more votes’ on ‘American Idol’ back in the day.

If there’s something Clay Aiken has in common with Donald Trump, it’s knowing that he was once just a few thousand votes away from winning the biggest competition of his life. Clay, 42, mocked the president on Twitter after hearing his ill-fated phone call with the Georgia Secretary of State Brad Raffensperger in which he begged him to “find” him more votes. “I had pretty much the same call with ‘Idol’ back in 2003,” Clay tweeted. “‘I just want to find 11,780 votes!’ Didn’t work for me either. ¯\_(ツ)_/¯ #TrumpTapes.”

Here’s the difference: Clay was just trying to beat Ruben Studdard to win season two of American Idol. Trump was attempting to fraudulently overturn the 2020 presidential election by berating and threatening an elected official for an hour over the phone. In a recording of the conversation obtained by The Washington Post, Trump tries to convince Raffensperger that he can just “recalculate” the election results to say that he actually won the electoral vote — not President-elect Joe Biden.

“The people of Georgia are angry, the people of the country are angry,” Trump told Raffensperger and his counsel. “And there’s nothing wrong with saying, you know, that you’ve recalculated.” Raffensperger responded that the data Trump has is “wrong” and based in conspiracy theories. “So look,” Trump mused. “All I want to do is this. I just want to find 11,780 votes, which is one more than we have. Because we won the state… So what are we going to do here, folks? I only need 11,000 votes. Fellas, I need 11,000 votes. Give me a break.” 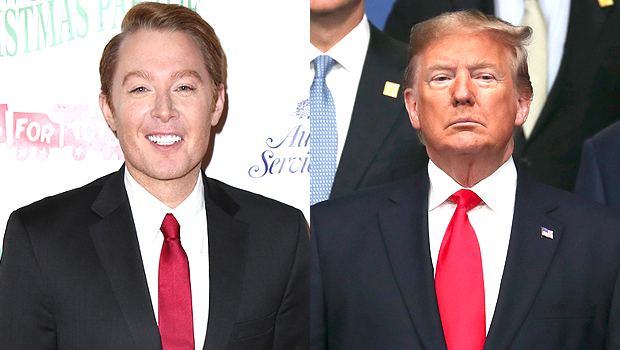 Clay, who competed on season five of Celebrity Apprentice, once supported Trump. The singer defended Trump against accusations of racism in 2016, but withdrew his support the following year after the president blamed “both sides” for the violence in Charlottesville, Virginia. “Remember all those times I defended @realDonaldTrump and believed he was not actually racist?” Clay, who has run for office himself, tweeted. “Well…I am a f**king dumb—. #im sorry.”