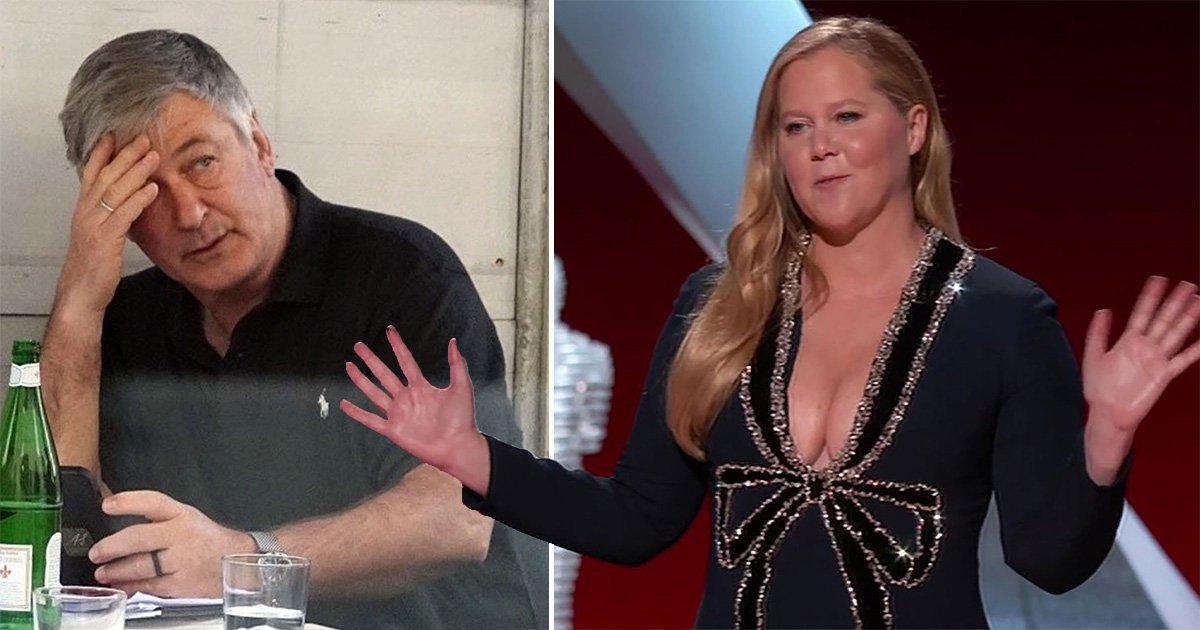 Amy Schumer has claimed that she was banned from referencing Alec Baldwin’s shooting at the Oscars.

The comedian co-hosted the ceremony at the end of last month, alongside Regina Hall and Wanda Sykes – in an evening which saw Will Smith storm the stage to slap Chris Rock.

Appearing at a stand-up show at Las Vegas’s Mirage Theatre on Saturday, she reportedly claimed that there were some things that were off the table when it came to her time on stage.

According to Vanity Fair, the I Feel Pretty actress told the crowd during the Aces of Comedy series: ‘I don’t even know what to say about the Oscars.

‘I was kind of feeling myself…and then all of a sudden, Ali was making his way up. And it was just a f**king bummer. All I can say is that it was really sad, and I think it says so much about toxic masculinity.

‘It was really upsetting, but I think the best way to comfort ourselves would be for me to say the Oscar jokes that I wasn’t allowed to say on TV.’

The publication reports that she went on to share some of the quips that she was not allowed to make on stage, directed at Joe Rogan and James Franco, explaining that her lawyer had warned against them.

Referring to Baldwin accidentally fatally shooting Halyna Hutchins on the set of Rust at the end of last year, she reportedly said: ‘Don’t Look Up is the name of a movie? More like don’t look down the barrel of Alec Baldwin’s shotgun.

‘I wasn’t allowed to say any of that [at the Oscars], but you can just come up and [slap] someone.’

The world was left reeling last year when Baldwin discharged a gun on the set of Rust, fatally shooting cinematographer Hutchins.

Director Joel Souza was also injured in the incident but was able to recover – while Hutchins was pronounced dead at a nearby hospital shortly after.

Schumer has been met with backlash over her revelation, with many questioning her previous statement of being ‘traumatised’ over Smith’s on-stage slap but then wanting to joke about a fatal shooting.

Discussing her comments on Twitter, one posted: ‘So, Amy Schumer is triggered and emotional after Slapgate, but she was willing to make jokes about Alec Baldwin killing someone.

‘Someone got slapped=emotional anxiety. Someone died=Oscars jokes for all to hear. FOH!!!’

‘Writing room told you not to say a s***ty joke about how Alec Baldwin killed someone on set by accident and you equate that to the slap are you deadass? @amyschumer,’ another questioned.

A follower tweeted: ‘How is it Amy Schumer is “traumatised” by a f**king slap but was gonna joke about Alec Baldwin and an ACTUAL traumatic event?

As a Twitter user added: ‘Amy Schumer said that Will Smith slapping Chris Rock was disturbing, sickening and traumatising.

‘However, she was willing to joke about Alec Baldwin SHOOTING Halyna Hutchins.

‘This joke would have been seen by Hutchins’s family and friends. One of these is actually traumatising!’

Following the Oscars incident last month, Schumer shared a message on Instagram, explaining she was ‘still triggered and traumatised’ over Smith slapping Rock on stage.

‘I think we can all agree that the best way to unpack what happened is to stream my series @lifeandbethhulu and see me on tour this fall,’ she told fans at the time.

‘But for real. Still triggered and traumatised. I love my friend @chrisrock and believe he handled it like a pro. Stayed up there and gave an Oscar to his friend @questlove and the whole thing was so disturbing.

‘So much pain in @willsmith anyway I’m still in shock and stunned and sad. I’m proud of myself and my cohosts. But yeah. Waiting for this sickening feeling to go away from what we all witnessed [sic].’

Metro.co.uk has contacted reps for Amy Schumer and the Academy for a comment.