AOC's 'Among Us' Twitch Stream Got Hundreds of Thousands of Views 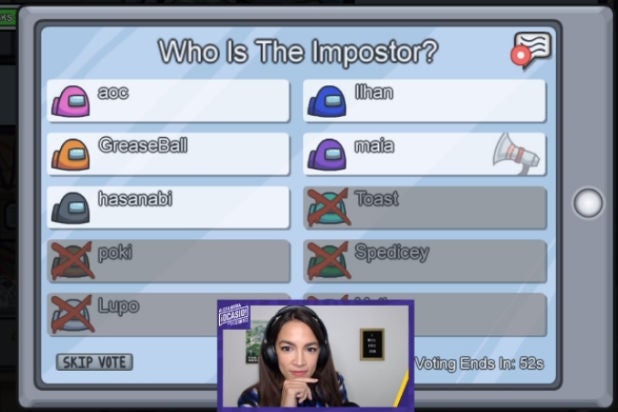 It turns out a ton of people wanted to watch Democratic congresswomen Alexandria Ocasio-Cortez and Ilhan Omar play “Among Us” — hundreds of thousands of people, in fact.

While Twitch hasn’t made data on total views available, according to The Verge, traffic on the stream for AOC’s three-hour session playing the multiplayer murder-mystery video game peaked at around 435,000 people. But though things declined somewhat from that peak, viewership remained high throughout the night. For instance, according to Washington Post reporter Phillip Bump, at around 6:30 p.m. PT — about an hour into the stream — more than 330,000 people were watching. And after more than two hours of play, according to The Verge, traffic was sitting at more than 350,000.

In addition, according to data available on Twitch, more than a million people total have already visited Ocasio-Cortez’s Twitch profile, which was created Tuesday, and she now has 550,000 followers.

If you want to see what all the fuss was about, visit the stream’s archive on AOC’s Twitch and watch for yourself.

“Among Us” is a multiplayer murder-mystery game from indie developers InnerSloth similar to “Clue,” only with a space-themed twist, pitting up to 10 players against each other in a race to be the last one standing. At least one player in the group is randomly assigned imposter, and must sabotage the spaceship or kill all the crew members as quickly as possible. The other players have to either catch the imposter or complete “tasks” around the ship first. If a dead body is found, a player can report it, which prompts a group meeting and vote to eliminate a contestant — who spends the rest of the game floating around as a helpful ghost.