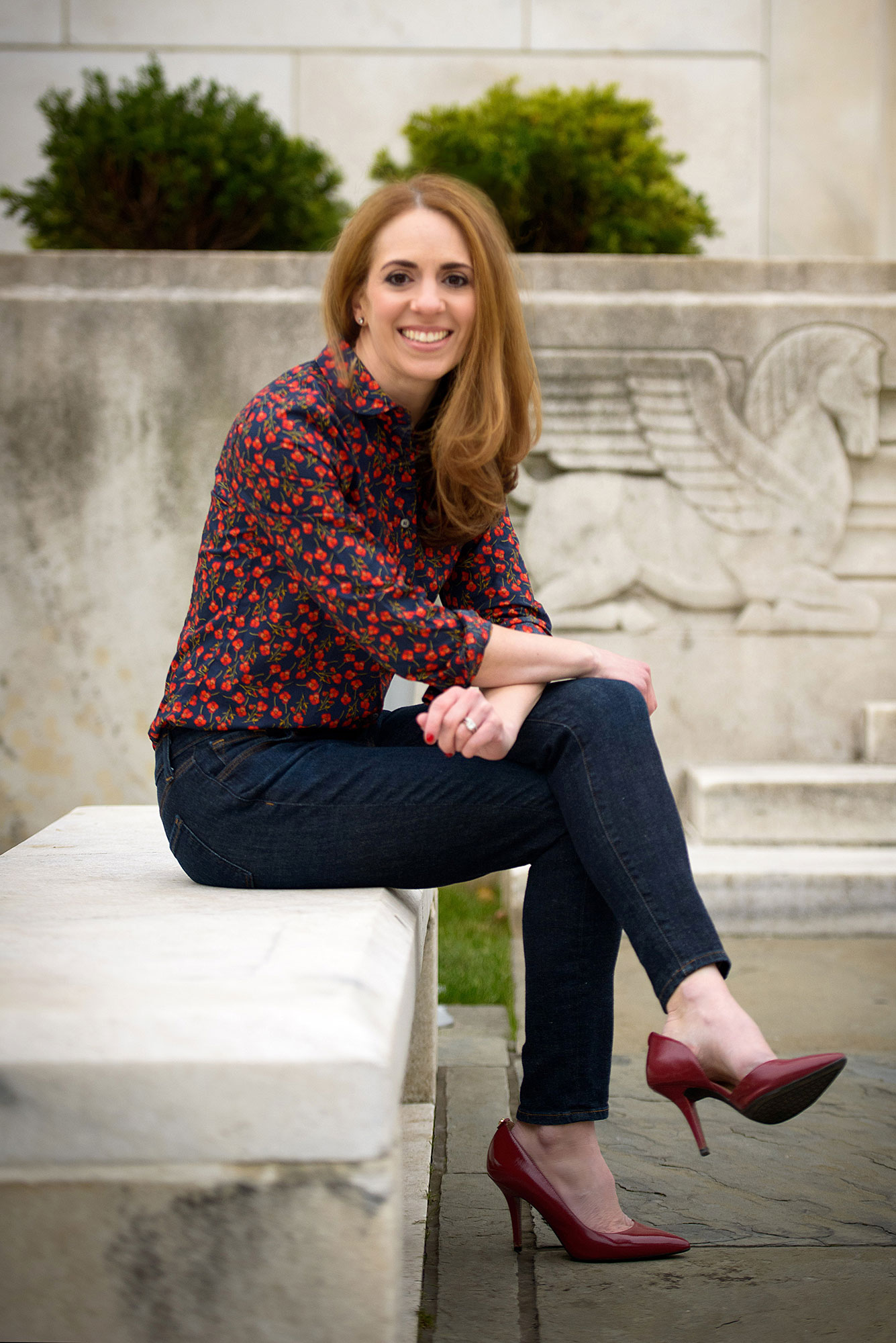 The drama never stops in Hollywood — and nor does it in Aimee Agresti’s upcoming novel, The Summer Set.

Meet protagonist Charlie Savoy. Charlie was once one of Hollywood’s biggest stars, but that chapter in her life has since closed. That is … until a car accident lands her in Boston Harbor and she’s sentenced to community service at the failing Chamberlain Summer Theater — the place where it all started for her.

But, there’s a twist: her former colleague and ex-boyfriend, Nicholas Blunt, is the artistic director of the program.

Throughout the summer, old wounds are reopened and Charlie is forced to face them head on. Slowly but surely, Charlie finds herself getting back into the swing of things, while making new friends, reigniting her relationship with Nick and ultimately, reminding herself what it was about the stage she loved so much.

Former Us Weekly editor Agresti’s novel is a feel-good read that’ll leave you pumped up for beach season.

Read on for an exclusive excerpt from The Summer Set, out Tuesday, May 12. 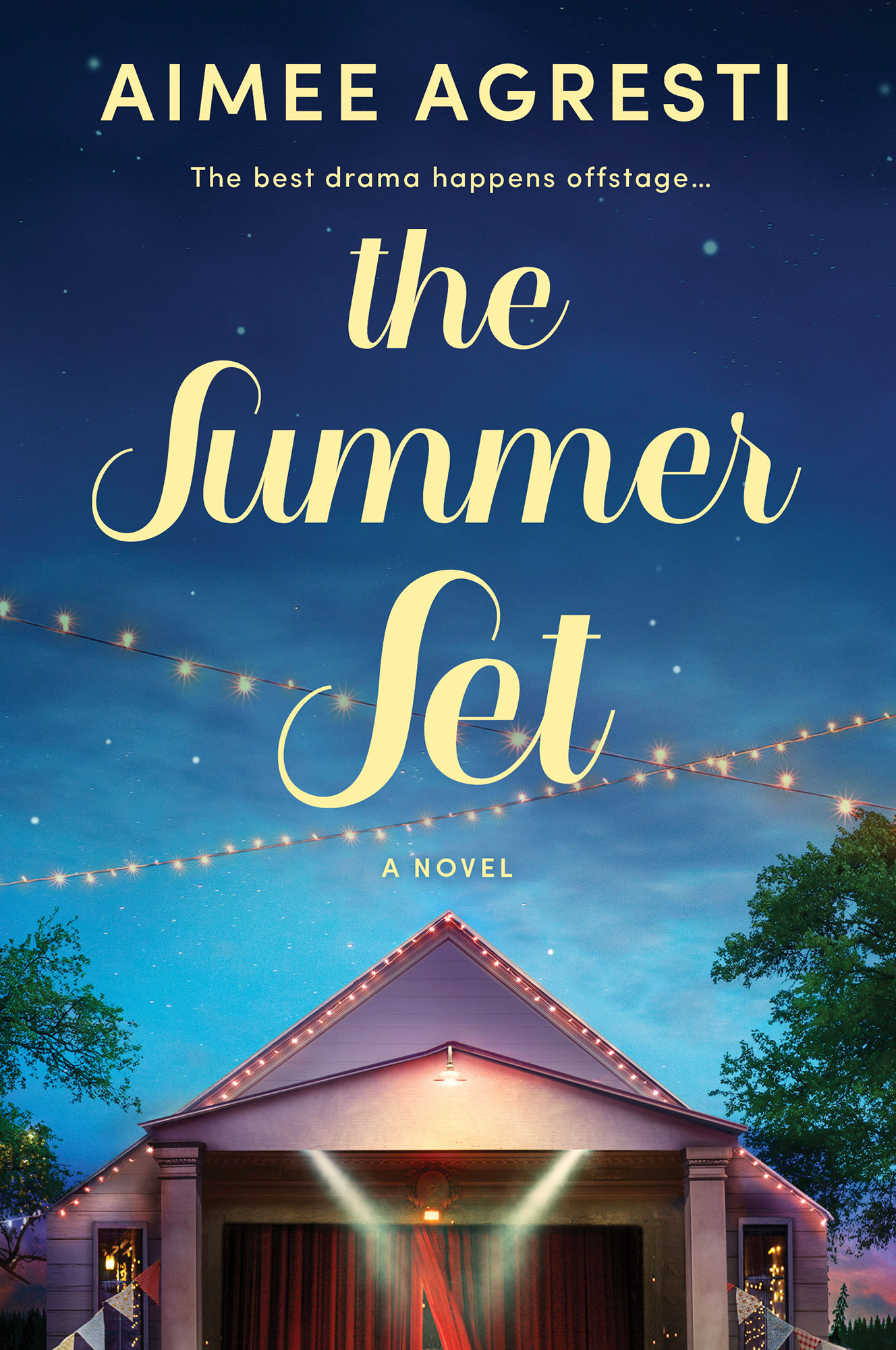 Actress Charlotte “Charlie” Savoy, 39, best known for her award-winning turn in the classic Nicholas Blunt’s The Tempest, limped away from a near-fatal crash in the early morning hours of April 24. Paramedics were summoned to Boston Harbor after local fishermen pulled the star from the river.

An eyewitness told STARCROSS that Savoy allegedly lost control of her car, which plowed through a barricade. The Oscar nominee reportedly flew through the smashed windshield as her Prius drove off the pier near Boston’s Institute of Contemporary Art. “It looked like something out of a movie,” the captain of a sightseeing tour boat docked nearby, which was damaged by debris from the flying car, told STARCROSS. He intends to press charges for destruction of property and reckless endangerment.

Savoy—who had a meteoric rise in her midtwenties, left Hollywood after a series of flops and now runs North End Cinema on Hanover Street—was treated for multiple lacerations and contusions, according to a source at Massachusetts General Hospital, but is expected to make a full recovery.

Authorities report that speed was a factor in the crash but it remains unclear whether alcohol or impairing substances contributed.

CHAPTER 1: SUSPEND YOUR DISBELIEF, AS USUAL

At least Charlie wore her sunglasses in the grainy photo, but they could only do so much. She slammed her laptop shut, as though a cobra might slither out from it. Only to open it again, take a deep breath and lean in to the full horror.

She groaned at the picture of herself, circa one hour ago. She was out of practice with this: it had been years since her photographer-dodging days. The Starbucks sign over her right shoulder indicated the shot had been snapped on the northwest corner of her street during her nearly unrequited search for a cab. That butterfly-bandaged gash slashing her forehead looked even gnarlier in the image. Her cheekbones and chin, battered and bruised, gave her face the uninviting aura of an overripe peach.

She should’ve just skipped work, she thought, excavating the makeup pouch from her office desk drawer. She swept on enough bronze foundation to erase even her freckles, masked that black-and-blue eye and painted on scarlet lips before returning to the screen.

The play-by-play felt like reading about someone else: it helped to not remember any of it. It didn’t help that her phone, wallet, purse, keys and pride were all still at the bottom of the river. (She had paid for her cab home from the hospital with the soggy bills in her jeans pocket. And thank God for twenty-four-hour doormen with spare keys.)

But the editorializing: Why did her standard ID always need to be that damn Tempest? This must be how it felt for people who shared beloved children with exes they couldn’t stand. Also there had been no substances—not the illicit kind, at least. And flops—plural? It had just been the singular flop, actually, a good movie that just hadn’t made any cash.

Sweating now, she tugged off her faux-leather motorcycle jacket—the real one hung in her apartment, drying out like crinkly parchment—and tossed it at the sofa, hitting that framed Midnight Daydream poster.

“My God, you’re alive!” A flash of zhushed hair and thick hipster frames. Miles, her adoring theater manager/projectionist, threw his arms around her, knocking papers from her desk onto the floor.
Including that letter. The one that had set her off last night before her drive.

“Just like I confirmed for you in the past seventeen emails,” she said as he clung to her. He had written all morning after seeing the story and getting no answer on her phone.

“It’s all my fault!” He tore himself away—her Frankenstein-stitched left thigh screaming in pain from the motion—and collapsed on her sofa. “I never should’ve given you the Ambien. I’m like some kind of low-life drug dealer! There’s blood on my hands!” He held up jazz hands, his head hung in shame.

“Wow, okay, no—” Charlie laughed, as she always did, at his melodrama.

“It’s not you, it’s me. I totally messed up timing that thing. Rookie mistake.” She straightened her leg beneath her long skirt, rotating her ankle. She had even rewrapped it herself (one role as a candy striper and she felt qualified). “Don’t drive or operate heavy machinery. Message received. I’m fine. Just suspend your disbelief, as usual—”

“And you still made me coffee?” he said, producing a North End Cinema–logoed cup. “What is wrong with you?”

“Absolutely nothing.” Charlie shook her head. “That’s what I’ve been trying to tell you.” Charlie made them each a cappuccino every morning at the theater’s opulent espresso bar. She saw no reason to abandon her routine today.

“I see what you’re doing,” he said, taking a sip. “Distraction. Charm. It won’t work.” He sipped again, then under his breath, muttered, “Why are your cappuccinos so much better than mine?”

“Cardamom,” Charlie said, returning to her laptop. She closed out the offending STARCROSS story, pulling up a spreadsheet instead. “And cinnamon.”

“WAIT!” Miles barked, regaining her attention. “I mean…” He searched for the words. “If last night wasn’t a cry for help I’m supposed to be answering, then what would you call it?”

“I don’t know.” Charlie exhaled, arms in the air. She really didn’t. She wasn’t the type to drive into a harbor. At least not anymore. Her mind whipped through her highlight/lowlight reel in flashes like one of those photo montages your phone automatically makes.

It was all pretty well-documented—publicly, internationally, globally. Before her first movie (at age nineteen), she had already: drunk too much; done too much Ecstasy; talked her way into every London club worth going to; danced on too many tables in too little clothing; shaved her head (twice); jumped off London’s Tower Bridge on a dare; got arrested; sat in on the drums at Wembley Stadium when she was briefly dating that miserable singer; slept with too many boys…and girls…occasionally at the same time and had it all mean too little; had too few friends; too much talent; and too much hunger.

And then she became successful and was maybe too passionate and had artistic standards set too high and possibly had too much bravado, and definitely had too much impulsivity and impetuousness. And then overnight she had…nothing. And now here she was. And that was how that ballad went.

“Not a call you need to answer,” Charlie assured him. “Put me right through to voice mail.”

“You’re sure this isn’t about the letter?” he asked, his tone delicate.

“Great!” he said, too peppy, overcompensating. “I just mean… You gave me quite a scare, young lady.” Charlie was, in fact, ten years Miles’s senior. “So just never do that again, okay?”

“Won’t happen again, officer.” Charlie nodded, her eyes on that poster of herself lying on a park bench in Boston Common, the title Midnight Daydream written as a constellation. Signed by the cast and crew—including Miles, then just a college-aged production assistant.

Charlie grabbed his arm as leverage, rising from her chair on that mangled leg. “Can we go back to talking about important things now, like when you’re going to make your move on the guy at the juice bar?” she said, hobbling out into the old-Hollywood glamour of the crimson velvet lobby. She had gutted the place, done a head-to-toe HGTV-worthy renovation after buying it on a whim—like a pack of gum at Stop & Shop—following the night of drunken revelry that was the wrap party for Midnight Daydream.

“I know, the protein shakes are garbage but I keep buying them to see him.” She felt relief at the return to normalcy.

“Listen, it’s not in the shakes to hold our destiny, but in ourselves,” she semi-quoted. “And in the meantime, we’ve got a subtitled Romanian horror film to show.” Charlie pushed him toward the entrance.

A guy who looked barely old enough to drink peered inside, hands against the locked glass doors, searching for signs of life. They got a lot of students here, especially on weekends, like last night’s weekly Dawn of the Super Id screening. She had shown it once as a joke long after its doomed theatrical release and it sold out. So Charlie kept it going and it had become her theater’s answer to Rocky Horror. They came at midnight every Friday in masks and capes, some handmade from dorm bedsheets. They yelled the terrible dialogue. They sang the theme song. They always left joyous, free, raucous. And when Charlie needed to feel like she was contributing in some way to society, she could at least appreciate having given them a night like that.

She liked to watch the transformation that swept her young audience over the course of that hour and fifty-three minutes. (In addition to its myriad detriments, the film was, in Charlie’s estimation, a solid twenty-three minutes longer than it had any right to be.) She just wished she hadn’t stayed last night. She had forgotten that, at some point, the sleeping pill would, presumably, do what it had been advertised to do. And that she could do something like drive into the river.

“Can’t see this stuff everywhere.” Miles crossed the lobby to unlock the doors.

Back in her office, Charlie’s fingers hovered over her laptop keyboard. Changing her mind, she patted at the floor for the smooth stationery with that neat penmanship. It had been a while since she had received a letter like that: formal, kind, thoughtful. Slouched in her chair, injured leg propped on her desk, she read it again. And again. Always coming back to the closing.

…Without prying, with only reverence and respect, could I ask: Why did you stop doing something you’re so good at? And more important: When will you come back? You are missed.