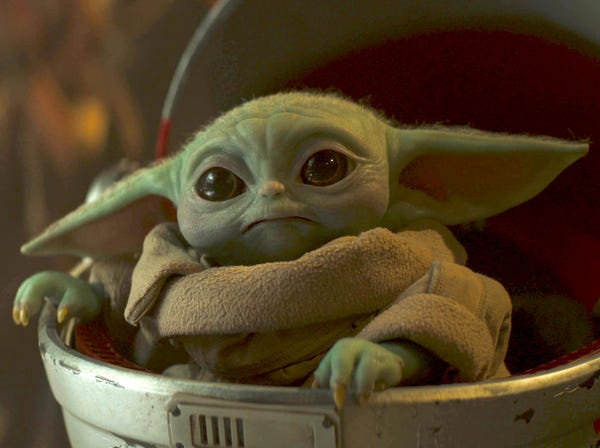 "The Mandalorian" season two is arriving on Disney Plus on October 30, and now "Star Wars" fans finally have a first look at the upcoming episodes.

In the new trailer, one scene shows a group of attackers threatening the Mandalorian while the Child (aka Baby Yoda) is nearby in his little floating crib. Sensing that his adopted father-figure is about to shed some serious blood using the "whistling bird" weapon, Baby Yoda presses a button that snaps his enclosure shut.

The moment has already been turned into a meme on Twitter, thanks to the very relatable "nope" message Baby Yoda is sending.

Baby Yoda is, of course, not literally the iconic "Star Wars" character as an infant. That wouldn't be possible, the real Yoda is dead at the place in the "Star Wars" timeline where "The Mandalorian" takes place.

In "The Mandalorian," he is referred to simply as the Child. He's the same species as Yoda, and longtime "Star Wars" fans know that the name of Yoda's species is one of the few details George Lucus never revealed. Until he gets a real name in the show, it appears that the moniker of Baby Yoda is sticking.

And don't worry — even the show's cocreator Dave Filoni says it's fine to call the little guy Baby Yoda instead of the Child.

You can watch the full trailer for "The Mandalorian" season two here. New episodes will begin airing on Disney Plus starting Friday, October 30.