Brad Pitt was photographed being pushed out of a medical center in a wheelchair after reportedly having a procedure done on April 14.

Brad Pitt has his wisdom teeth removed on April 14, according to Page Six. The actor was photographed being escorted out of his dentist’s office in a wheelchair following the outpatient procedure. In the pictures, WHICH YOU CAN SEE HERE, Brad was mostly covered up, wearing a face mask and the hood of his black jacket pulled up over his head. He also had on sunglasses to go as incognito as possible.

Hopefully, the recovery won’t be too painful for Brad, as he has a big appearance coming up at the Academy Awards later this month. Brad is set to present at the show, following his win for Best Supporting Actor at the event in 2020. Despite the coronavirus, the Oscars will take place fully in-person, which is a different approach than that of the Golden Globes and SAG Awards, which were mostly virtual. 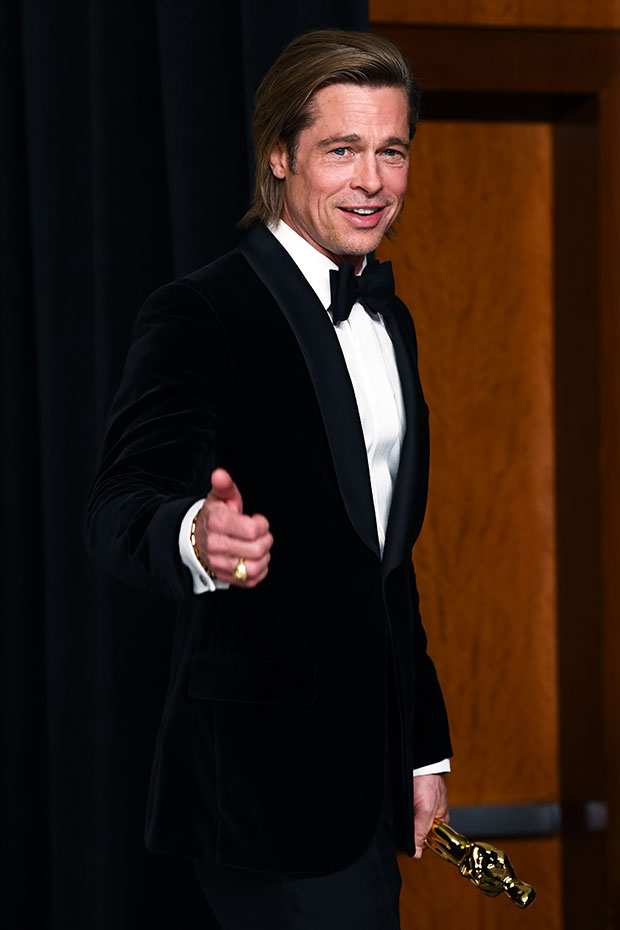 Meanwhile, Brad was recently embroiled in new legal drama with his ex, Angelina Jolie. The two split in Sept. 2016, but have yet to finalize their divorce or work out their custody agreement. The two share six kids together, although their oldest son, Maddox Jolie-Pitt, is now 19 and of legal age to make his own decisions outside of Brad and Angie’s custody arrangement. Pax will join him in November when he turns 18.

Although Brad and Angelina reached their temporary agreement in 2018, the actress filed new court documents in the divorce case in March 21. In the docs, Angelina claimed that she had “proof and authority” to back up allegations of abuse against Brad. In 2016, Brad was investigated for child abuse, but he was cleared by both Child Protective Services and the FBI less than two months later. The specifics of Angelina’s allegations were not outlined in her new documents.

“Brad is heartbroken that Angelina has gone this route,” an insider told Page Six in March. “There’s a lot of emotion left after their marriage. He has taken responsibility for his actions and owned up to his past issues. Brad feels like he’s being more and more isolated from his children and he’s devastated about it.”

A source also told HollywoodLife, “The deliberate leak of this information is to no one’s benefit and is simply the continuation of an ongoing relentless effort to target and tarnish Brad. Since the divorce filing, there have been a never-ending series of allegations, which seem to be solely to elevate one side by taking down the other.”