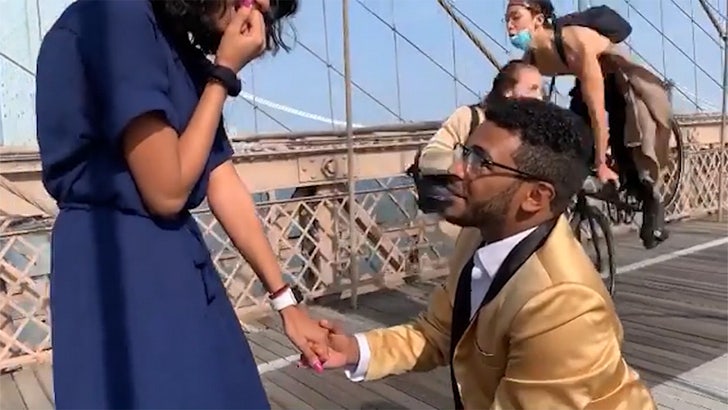 A romantic proposal on the Brooklyn Bridge turned into a slapstick rom-com scene when the guy photographing the moment got CREAMED by an out-of-control biker!!!

Chris Vigo from the Bronx got on bended knee to pop the question to Angelica Rivera … and enlisted his pal, Josh, to snap some photos of the special moment.

As Chris gets his bearings you see bicycles whiz by. There are more bikes than ever in NYC, because lots of people are scared to ride the subway because of rona.

As Josh gets in position to capture the “will you” and the [hopefully] “yes, yes I will!!” … a shirtless cyclist careens into him as both guys go down hard.

Everyone was okay, and props to Chris for not even letting go of his lady’s hand. He says not to worry — they’ll edit the crash out of the video — but, hey, that’s what makes it special and over time they will love it, right?

BTW — Chris’ lady is now his fiancee … so yes, she said yes.