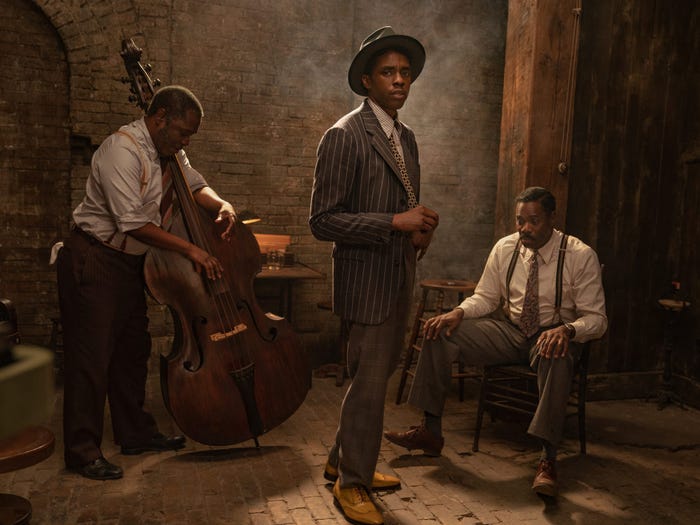 On Saturday night, Netflix along with the American Film Institute held a virtual screening of "Ma Rainey's Black Bottom." It marked not just one of the first times the Oscar hopeful was shown to audiences, but also revealed the final performance by Chadwick Boseman.

Boseman, who died suddenly in August due to colon cancer, gives a riveting performance as a ambitious trumpet player for the band of the legendary "Mother of the Blues," Ma Rainey (played by Viola Davis).

In the adaptation of the August Wilson stage play, we follow the band as it records Ma's hits at a studio in Chicago in the 1920s. Throughout the movie, we watch the band members cope with their own challenges with race and cultural status. It leads to all of them telling stories from their past.

In one instance, the trombone player Cutler (Colman Domingo) tells a story about what happened to a Black pastor he knew when confronted by a group of White men. The story puts Boseman's Levee character into a range which leads him to denouncing God.

In a Q&A moderated by Samuel L. Jackson with the movie's director, George C. Wolfe, and cast (which Insider watched), Domingo recalled that Boseman was so emotional doing that scene that there was a moment when Boseman looked like he was going to stop performing.

"He stops mid way of the speech, and whatever was happening there I think [co-stars] Michael [Potts], Glynn [Turman], and I, we all knew it," Domingo said. "It was one of those moments when you go, 'This is the good stuff, and we're all here, do not step away.'"

But Domingo noticed a look in Boseman's eye that got him concerned.

"Something was happening with Chad, and he turned away," he said. "I thought he was about to stop the scene, and I don't think I've ever done this before in my entire career, I just said, 'Tell me, tell me.' I was just yelling at him. 'Tell me! Tell me!' Like, do not give up this scene. And then he explodes with all the rage and fury and the questions of God's will."

Domingo said when the scene ended all the actors knew they had just done something powerful.

"We all just embraced each other and sobbed," he said. "All these grown men with tears in their eyes. Michael, Glynn, Chad, myself we were silent for at least a good minute and we were all trying to collect ourselves. We didn't know what was in the room and what we were actually dealing with, what were the underpinnings of that scene. It was a whisper at first and then it was a roar."

Domingo said he didn't realize it at the time, but with the passing of Boseman he now recognizes what the late actor was trying to accomplish.

"That man had this fight in him to the very end, and now it makes sense why he's played so many kings in rapid succession, it's as if he knew he didn't have enough time on this Earth," Domingo said of the "Black Panther" star. "Or he wasn't given to us for that long. But he made such an impression that I think this film seals the deal."

Domingo also revealed in the Q&A that at Boseman's memorial his wife, Taylor Simone Ledward, told he and Turman that he was most proud of this movie.

"This truly is part of his legacy," Domingo said of "Ma Rainey's Black Bottom." "He couldn't be more proud that this was his final film."

And it certainly is going to lead Boseman to receiving a lot of recognition as we go deeper into award season. His performance — filled with anger and charisma — is the best of his career and it would be shocking if he doesn't receive a posthumous Oscar nomination for it.