Home » Celebrities » CHRISTOPHER STEVENS: No one can do a clipped accent any more

CHRISTOPHER STEVENS: No one can do a clipped accent any more

CHRISTOPHER STEVENS reviews the weekend’s TV: How frightfully sad that no one can do a clipped accent any more

Life On The Edge

Did the telly executives actually understand what they were commissioning when they signed up for their wartime costume drama The Singapore Grip (ITV)? I am starting to doubt that the channel’s bosses ever read the book.

Certainly the opening titles, with their cartoons and jaunty jazz theme, suggest they were expecting something more like Jeeves And Wooster… gals with beaded dresses and plunging necklines, squiffy chaps with cigarettes and monocles, that sort of frothy thing.

ITV loves a period production, crammed with classic cars and romantic costumes. This one looks splendid, and the story rattles along, but it is an unexpected choice. Unlike last month’s A Suitable Boy on BBC1, which was set among Indian families during the Fifties, all the major characters here are Brits abroad. 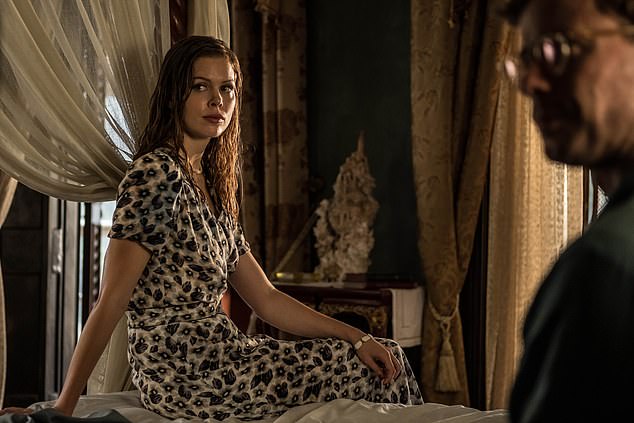 Georgia Blizzard as Joan Blackett in The Singapore Grip

The Army types are idiots, the women are snobs and Asian characters are mostly seen but not heard. This drama wants to be Downton Abbey in the sun, but it can veer into It Ain’t Half Hot Mum.

Playwright Sir Christopher Hampton, who adapted the story from his long-dead friend J.G. Farrell’s 1978 novel, takes a wicked glee in allowing the characters’ remarks to betray their bigotry and arrogance.

There’s a fair bit of naked racism on display. One character could barely bring himself to speak about an old school friend: ‘He’s married a stinger… a mixed drink!’ he spluttered, meaning a Eurasian woman. ‘Of course he had to resign from all his clubs.’

David Morrissey does his best to sound the caddish colonial. He has a roguish twinkle and the dapper moustache. The man is unmistakeably a scoundrel. He might have walked straight out of a short story by Somerset Maugham… until he speaks.

Insufficiently strangulated, not nasal enough, Walter Blackett sounds like an impostor when he is meant to be the epitome of an Empire man.

It is strange, the way accents evaporate after a few decades, until they become almost impossible to mimic. I have never heard a modern actor who can quite capture that clipped, back-of-the-throat delivery of the Pathe cinema newsreaders. Plenty attempt it but the result is inauthentic, always a parody.

Sunsets of the weekend:

Warwick Thornton’s six-part series about life on the remote Australian coast, The Beach: Isolation In Paradise (BBC4), is filmed by his son, Dylan River. It is a very long way from civilisation… but what a view.

As for Blackett’s drunken wastrel of a son, Monty (Luke Newberry), and the timid hero Matthew (Luke Treadaway), they don’t even try. Their delivery is blandly modern. It might be a cop-out but it is less distracting.

There is a running joke that no one will tell Matthew what the Singapore ‘grip’ really is. Explanations so far vary from a tropical disease to a hairgrip.

The word flummoxed Louis Theroux, too, as he watched the arrest of a suspected drug dealer in Philadelphia in his retrospective, Life On The Edge (BBC2).

‘Y’all got me gripped up,’ the man complained as police bundled him against a wall. At first it seemed he was protesting against rough handling, but in fact he meant that they had planted a gun on him. In Philly, a ‘grip’ is a pistol.

This look back at Louis’s career focused on the years when he grew up as a broadcaster, making the switch from his facetious Weird Weekends to serious and often disturbing documentaries.

Though he was interviewing killers and child abusers instead of fruitcakes and fetishists, he did not lose his air of studied understatement. Analysing the racism endemic in U.S. prisons, he commented: ‘San Quentin isn’t the kind of place that gives you the option of being a modern, cosmopolitan, enlightened dude.’

Nor was wartime Singapore, of course. Over there, a cosmopolitan was just another cocktail.