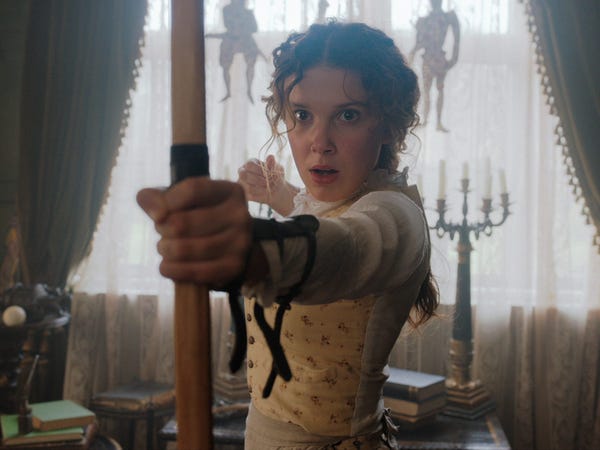 When Sherlock Holmes (Henry Cavill) abandoned the countryside to sleuth around London, he left behind his wilding little sister, Enola Holmes (Millie Bobby Brown) — that is, according to "Enola Holmes," the new on-screen adaptation of Nancy Springer's young adult book series "The Enola Holmes Mysteries."

And though Sherlock never visits or writes home, Enola, whose name we are oft reminded spells "alone" backwards, diligently collects newspaper clippings about his cases.

In "Enola Holmes," a Legendary Pictures and PCMA Productions project distributed by Netflix, the strong-willed heroine gets a chance to solve her own.

What's it about: Set in 19th century England, Enola searches for her missing mother and her identity within the famous Holmes family

When Eudoria inexplicably disappears on the morning of her daughter's 16th birthday, her sons Sherlock and Mycroft Holmes (Sam Claflin) return to their estate, surprised to find their sister without a traditional education, let alone a governess.

Without her mother at home, Enola's future lies in Mycroft's hands.

She's faced with the decision to follow her mother's hidden ciphers leading her to freedom or succumb to Mycroft's plan to enroll her in finishing school and make her a "proper" lady.

For her, the decision is easy. The trick being that Enola needs to track down Eudoria before Sherlock catches her.

What begins as a laser-focused search for her mother turns into something with much greater implications when she meets fellow runaway Lord Viscount Tewkesbury (Louis Partridge).

With multiple men on her tail — some trying to tame her, others trying to kill her — Enola navigates the streets of London and the English countryside disguised as either a boy or an equally unlikely corset-wearing girl, switching courses several times while on a mission to right others' wrongs.

Why you should watch: 'Enola Holmes' is focused on a strong female protagonist and has a stacked cast

Period pieces have been adapted and modernized countless times, but few of them have been centered around a female protagonist as fierce as Enola.

The young woman refuses to comply with society's assigned gender roles, whether they be marrying a man or wearing an itchy hat. And though there is an abundance of stories set in the late 19th century, rarely do viewers see a strong, disobedient woman in search of something greater than courtship (and who doesn't end up getting married anyway because they finally met the "right" man).

In "Enola Holmes," they finally do.

Director Harry Bradbeer gives viewers an unfiltered look at a young Victorian woman. Much like he did on the first two seasons of the award-winning show "Fleabag," Bradbeer invites the protagonist to break the fourth wall and share her thoughts directly with the audience.

Thanks to Brown's impressive delivery, viewers have the opportunity to meet a complex, uncompromising feminist living in a time period when a woman's individualism wasn't widely accepted. Nor were her demands for equal rights.

And though Enola is a brave detective willing to play dress-up for the job, she's not immune to the period's patriarchal ways. From Mycroft's control over her future to institutions barring women from entering, examples of institutionalized inequality are scattered throughout the film.

The topic is most blatantly and effectively addressed when Eudoria's friend, a Black feminist named Edith (Susie Wokoma), points out Sherlock's privilege as a wealthy white man midway through the film.

In fact, the story would've benefitted if screenwriter Jack Thorne included more of those deep conversations in place of some of Enola's action scenes. Because while she proves that her combat skills can keep her ahead of her enemies time-and-time again, some of her on-screen relationships come off as underdeveloped.

Enola's feelings for Tewkesbury, in particular, abruptly flip-flop from annoyance to admiration with little interaction between the characters.

Though their potential romance isn't meant to be at the forefront of the plot, and she claims to grow more fond of him during his absence, the rapid progression of their closeness could've been slowed down to feel more authentic.

The film's stacked cast will likely win over viewers regardless, though.

Brown, who rose to fame on "Stranger Things" before appearing in nearly every scene of "Enola Holmes" and co-producing the project with her sister Paige Brown, carries the film on her shoulders.

She's flanked by Cavill of "Man of Steel" playing a softer-than-usual Sherlock, which led to a lawsuit from Sir Arthur Conan Doyle's estate, and Claflin of "Pirates of the Caribbean: On Stranger Tides" as Enola's traditional, heavily mustached eldest brother Mycroft.

Carter, their on-screen mother, rounds out the family as the whimsical, free-spirited Eudoria, a role that feels completely natural for her, especially after her performance as an early British activist trained in jiu-jitsu in the 2015 film "Suffragette."

As for Patridge, who appears on the show "Medici," the British teenager holds his own as Enola's love interest and loyal sidekick, Tewkesbury.

The bottom line: 'Enola Holmes' is a delightful watch, but viewers shouldn't go in expecting a remake of Sir Arthur Conan Doyle's Sherlock

At slightly over two hours, "Enola Holmes" is a high-energy feminist story that has a little bit of something for everyone — mystery, activism, romance, history, and action.

While many of Sherlock's cases are known for being multi-faceted and impossible for anyone aside from the famous detective to figure out, his sister's first attempt at solving a crime is fairly straightforward and easy to follow.

The key to figuring out the crime is to be the first one at the scene, rather than the most technically advanced. In fact, Enola spends more time dodging her brothers, changing from corsets to slacks, and making snarky comments to the camera than sourcing clues.

So between Enola's coming-of-age story and the current events happening around her, the mystery at hand can feel secondary.

This type of case makes "Enola Holmes" approachable for many but disappointing to those accustomed to more sophisticated detective work.

Although it's tempting to size her up to Sherlock due to their shared moniker, it's important to realize that "Enola Holmes" isn't about a young woman following her brother's path. Rather, it's about Enola's quest to carve her own.

"Enola Holmes" premiered on Netflix on September 23. You can watch the trailer below.