Home » Celebrities » Evander Holyfield Has Announced His Return to Boxing

Evander Holyfield Has Announced His Return to Boxing

Evander Holyfield surprised fans on Wednesday when he announced that he’s planning on making a comeback to boxing. Holyfield announced his return in a tweet, saying that he would be “fighting in exhibition matches for a great cause, #Unite4OurFight.” On the Unite 4 Our Fight website, the boxer explained that the campaign “aims to fill the void the [coronavirus] pandemic has created on access to resources our youth needs for emotional development and education.”

Are you ready? The moment you’ve all been waiting for…
The Champ is back! 🥊 I’d like to announce that I will be making a comeback to the ring. I will be fighting in exhibition matches for a great cause: #Unite4OurFight. Learn more: https://t.co/dfSo0HvV2O pic.twitter.com/8PfrzalHty

Holyfield has not fought professionally since he knocked out Brian Nelson in May 2011, and he officially retired from boxing in 2014.

During his career, which started in 1984, he was the only boxer in history to win the undisputed championship in two weight classes, and he is the only four-time world heavyweight champion.

Holyfield is actually following in the footsteps of his old rival and buddy Mike Tyson, who had previously stated that he wanted to come back to the ring to participate in three to four-round charity exhibition bouts to help those affected by drugs and homelessness. 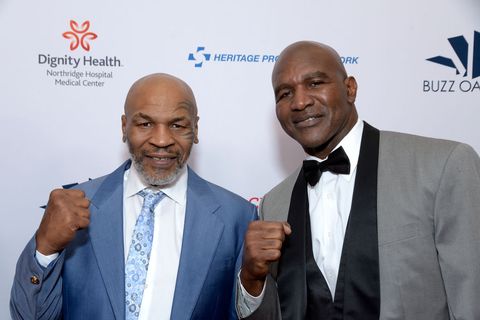 During an Instagram Live with the rapper T.I., Tyson revealed his training regimen: “I do about two hours on cardio, I do the bike and I do the treadmill for an hour. Then I do some light weights – 300, 250 reps. Then I start my day with the boxing thing. Then I go in there and hit the mitts for like 30 minutes, 25 minutes. Gotta get in better condition.”

And while there are no plans for a Holyfield – Tyson matchup right now, it could still happen. Their 1996 fight saw Holyfield stop Tyson in the second to last round to win his WBA heavyweight belt, and their 1997 fight, a.k.a The Bite Fight, ended with Tyson biting a chunk out of Holyfield’s ear.