Eve, Nas and More Pay Tribute to DMX at His Memorial Service

DMX left a lasting impact on those close to him. The rapper was honored at a celebration of life memorial on Saturday, where friends and family members opened up about his legacy.

The star’s private memorial — live streamed on his YouTube channel — at Brooklyn’s Barclays Center was attended by Eva, Nas and many more of his famous friends who took a moment to pay their respects.

“Thank you for the energy that everyone has brought here today, a celebration of how great DMX was, what he has left behind,” Eve expressed. “I am seriously the luckiest woman in the world to have been adopted by the Ruff Ryders.”

“This is so hard,” she paused. “What I pray, what I hope, I prayed to God…That his journey was smooth. I know that he will rest in power. Rest in love and most of all he will rest in peace.” 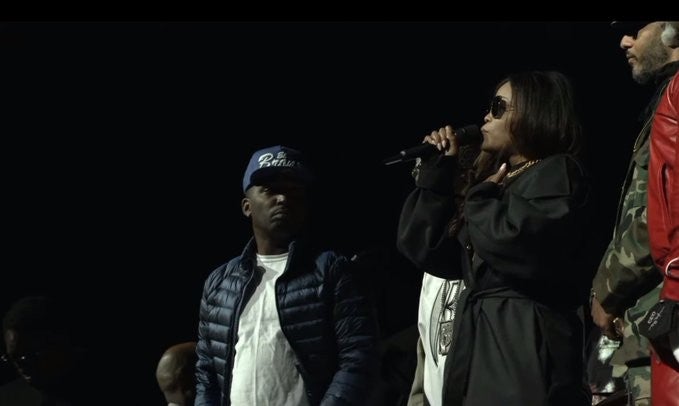 Nas also touched on their friendship and working together on the movie Belly.

“As my brother, we did a great movie together and on that movie he was just rising up as a star,” Nas said. “His first album didn’t even come out yet but he knew his journey was starting…He looked at me, tears in his eyes, because he knew the journey that he was about to embark on.”

He then expressed his condolences to DMX’s family, fans and friends.

Kanye West and his Sunday Service Choir opened the late rapper’s Celebration of Life memorial service. The group wore hooded sweatshirts and huddled around a piano to sing a medley of songs including, “Back to Life,” “Keep on Movin'” and more in honor of DMX.

West’s imprint also Yeezy teamed up with Balenciaga to pay tribute to DMX with a shirt in honor of the late rapper. Yeezy unveiled the design of the long-sleeve shirt on its dedicated website, which bears a portrait of DMX on the front with his date of birth on one sleeve and the date of his passing on the other. The back says, “In Loving Memory” along the hemline.

Fans can buy the shirt for $200 with net proceeds going towards DMX’s family.

IN MEMORY OF DMX
DESIGNED BY BALENCIAGA
INITIATED BY YEEZY pic.twitter.com/9AlPaWVyWQ

DMX’s funeral and homegoing celebration will be held on Sunday at 2:30 pm ET, and will broadcast live on BET and its YouTube channel.

DMX died on April 9, days after he was rushed to the hospital following a heart attack. He was 50.

After being hospitalized, a source close to DMX told ET that medical staff “tried to revive him twice in the house, and revived him again in the hospital.”

A vigil was held on April 5 for the GRAMMY-nominated artist as he fought for his life. That day, ET spoke with Craig Brodhead, a member of DMX’s management team and a friend of more than 30 years who was one of the estimated 500 people who gathered together for the vigil.

In a statement to ET after his death, DMX’s family honored him as a “warrior who fought till the very end.”

“We are deeply saddened to announce today that our loved one, DMX, birth name of Earl Simmons, passed away at 50-years-old at White Plains Hospital with his family by his side after being placed on life support for the past few days,” the statement read. “Earl was a warrior who fought till the very end. He loved his family with all of his heart and we cherish the times we spent with him. Earl’s music inspired countless fans across the world and his iconic legacy will live on forever. We appreciate all of the love and support during this incredibly difficult time. Please respect our privacy as we grieve the loss of our brother, father, uncle and the man the world knew as DMX.”

See more on DMX in the video below.