Home » Celebrities » Everything you Need to Stream Music in Surround Sound

Everything you Need to Stream Music in Surround Sound

Music streaming services have replaced CDs and music downloads, but they haven’t offered the option of listening in surround sound until recently.

Many classic albums were remixed in 5.1 surround sound during the late 1990s and early to mid 2000s on niche formats like DVD-A (audio) and SACD (super audio CD). These formats never reached mainstream success, which means tracking down the physical discs can be time consuming and expensive.

But Amazon Music HD and Tidal have recently introduced the ability to stream music in Dolby Atmos, a new format of surround sound that’s used in movie theaters to create an immersive listening experience. If you have the right equipment, sound will be sent toward you and above you, bouncing off your ceiling to create a more realistic 360-degree effect.

4 Ways Venue Owners Can Connect With Audiences During the Pandemic

Listening to a true Dolby Atmos mix of a classic album can be incredible, but streaming it comes with a couple of caveats. The biggest one is that some services only let you stream music through speakers that simulate surround sound. These speakers have drivers that are pointed in different directions, and depend on a custom audio processor to send the right sounds to the right places. It’s better than listening to music in stereo, but you won’t get the full effect of listening to music in surround sound.

The other issue is that Dolby Atmos is a new format, which means most music hasn’t been mixed to take advantage of it. That’s slowly changing, but don’t expect your full digital music library to be available in Dolby Atmos right away.

It’s important to know the current restrictions of streaming music in surround sound before you get started on this project, but these limitations will get resolved over time. If you’re interested in streaming surround sound music right now, here’s what you’ll need to get started.

The first thing you’re going to need to stream music in surround sound is a subscription to either Amazon Music HD or TIDAL (Hi-Fi plans only). Both services share great features like the ability to stream millions of songs without ads, streaming songs in CD or high resolution quality, making and sharing playlists, downloading tracks for offline listening, and are available on Mac, PC, iOS, and Android.

Amazon Music HD costs $14.99 per month ($12.99 if you have Amazon Prime), but only lets you stream Dolby Atmos music on its Echo Studio speaker. Dolby says it’s worked with Amazon to ensure music mixed for Atmos sounds great, but you’re not going to get the full effect. Amazon offers a free 30-day trial to all new subscribers to this service, or a 90-day trial if you get an Echo Studio or other select speakers. While it’s somewhat compromised, the combination of Amazon Music HD and the Echo Studio is a cost effective way to stream surround sound music in your home. The price is right (especially for Prime members) and you won’t have to invest in an expensive, multi-component audio system.

If you’re setting up a dedicated surround sound home theater system, a subscription to Tidal Hi-Fi is the only way to stream music in “True” Dolby Atmos. You can stream music through an A/V receiver and Dolby Atmos-compatible speakers for the best experience, or a soundbar if you don’t mind simulated surround sound. Tidal Hi-Fi is worth considering even if you don’t have a full Dolby Atmos setup because it supports more than one speaker.

The service costs $19.99 per month, and also includes access to a library of “Tidal Masters” tracks, which are exclusively available through this service. In our experience, music that’s been mastered exclusively for Tidal sound better than any other digital version. If you care deeply about audio fidelity — whether the track is in surround sound or not — Tidal Hi-Fi is worth the price.

The speakers must have multiple drivers aimed in different multiple directions, including upward or downward. Dolby Atmos is a new technology, which means your old receiver and speakers weren’t designed with it in mind.

This doesn’t mean you have to start from scratch, we’ve included an explanation on how to upgrade your current home theater system into one that’s Dolby Atmos compatible. 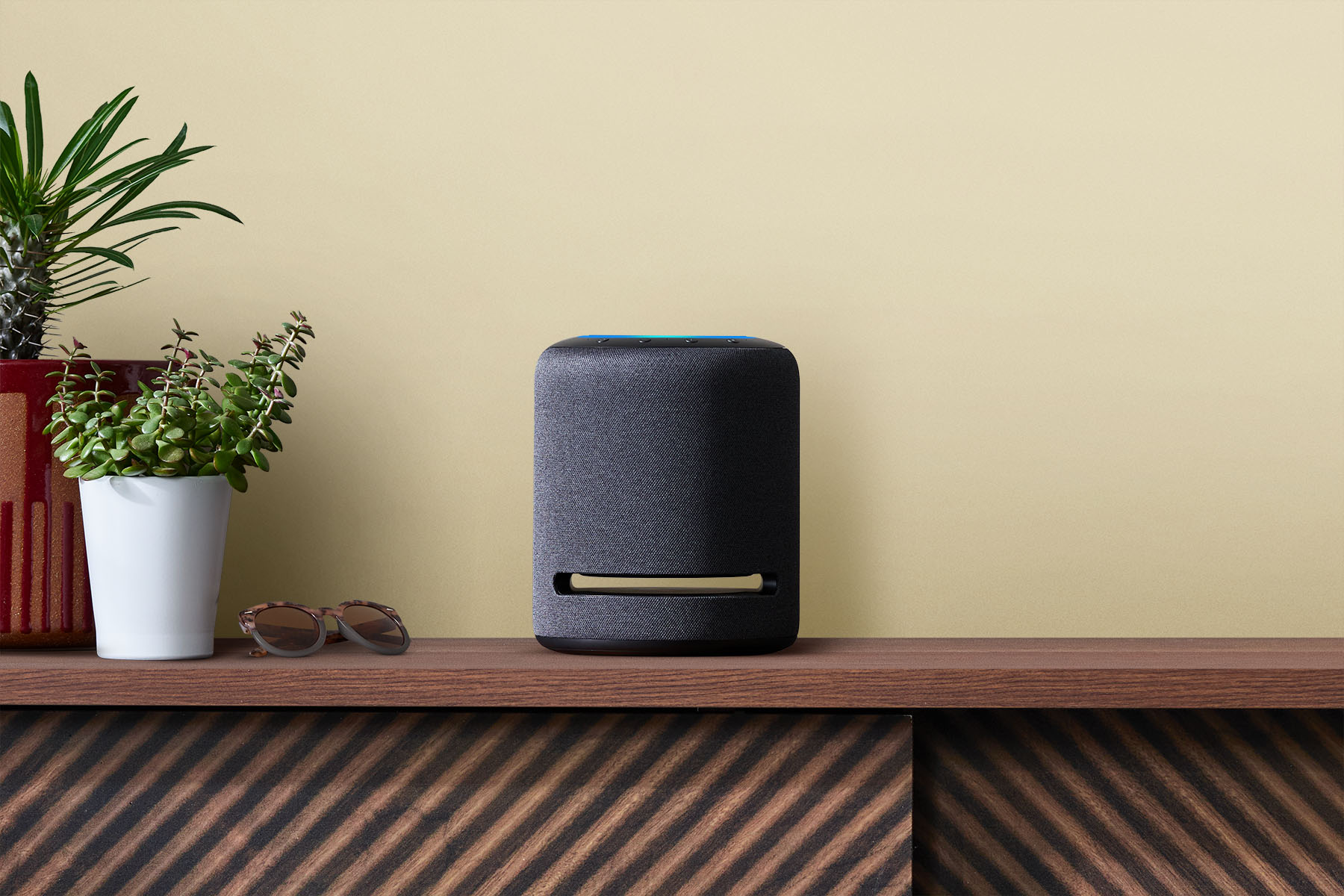 Amazon’s Echo Studio is the most compact Dolby Atmos audio system you can get.

It has five drivers pointed to the left, right, forward, upward, and downward, which Amazon says allows it to produce “expansive, spatial sound.” We’ve gotten a chance to test this speaker out, and it does sound good, if a little too bass-heavy, but never tried listening to Dolby Atmos tracks.

The speaker is smart enough to adapt the way it sounds based on the room it’s in to optimize its sound, so you won’t have to find a sweet spot for it. The biggest benefit to getting the Echo Studio over another Dolby Atmos audio system is that it works with Alexa, Amazon’s smart assistant. You can use Alexa to adjust the speaker’s volume, play music (tracks, albums, or playlists), or control compatible smart-home accessories totally hands free.

If you’ve decided to stream Dolby Atmos tracks though Amazon Music HD, and don’t mind the fact that you’ll be hearing simulated surround sound, this is the speaker to get. 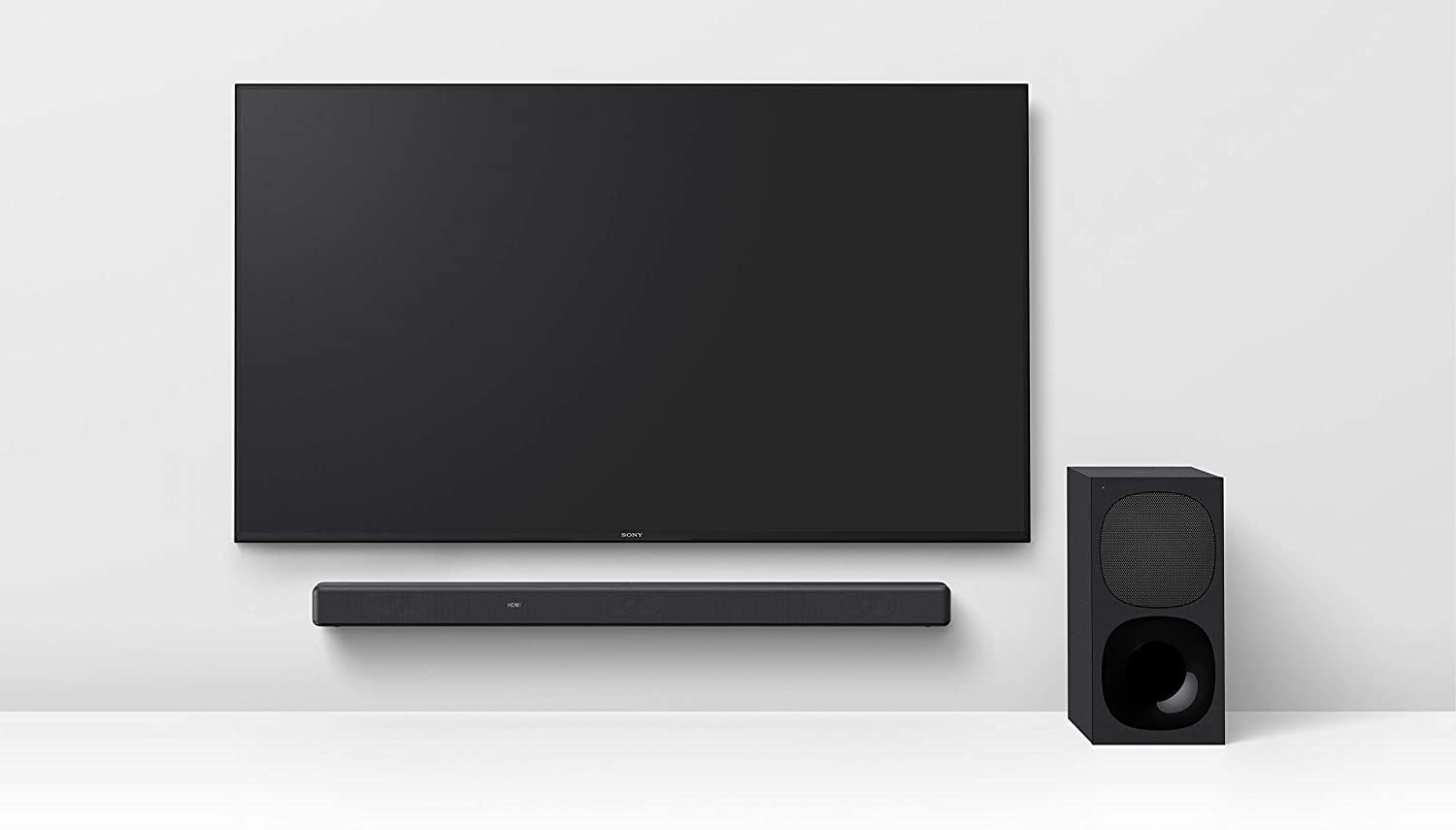 Sony’s HT-G700 is a 3.1 soundbar that uses Dolby’s DTS: X and a custom upscaler to simulate a 7.1 surround sound system.

In reality, the soundbar has three drivers, plus a subwoofer for extra bass. The HT-G700 is 38.6 inches long, which is pretty big for a soundbar. This allows the drivers to be spaced far enough apart to mimic the experience of using a traditional stereo speaker system.

You can connect the soundbar to your TV using an HDMI or optical audio cable (both included). We recommend going with HDMI for the best experience. The downside to streaming Dolby Atmos music through a soundbar is that it requires your TV to have an eARC (audio return channel) port, which was only introduced in the last year or two. If your TV doesn’t have one of these ports, you won’t be able to use the HT-G700 for surround sound streaming.

This soundbar will be a massive improvement over the speakers built into your TV. If you have a newer set, you’ll be able to stream music in surround sound, too. 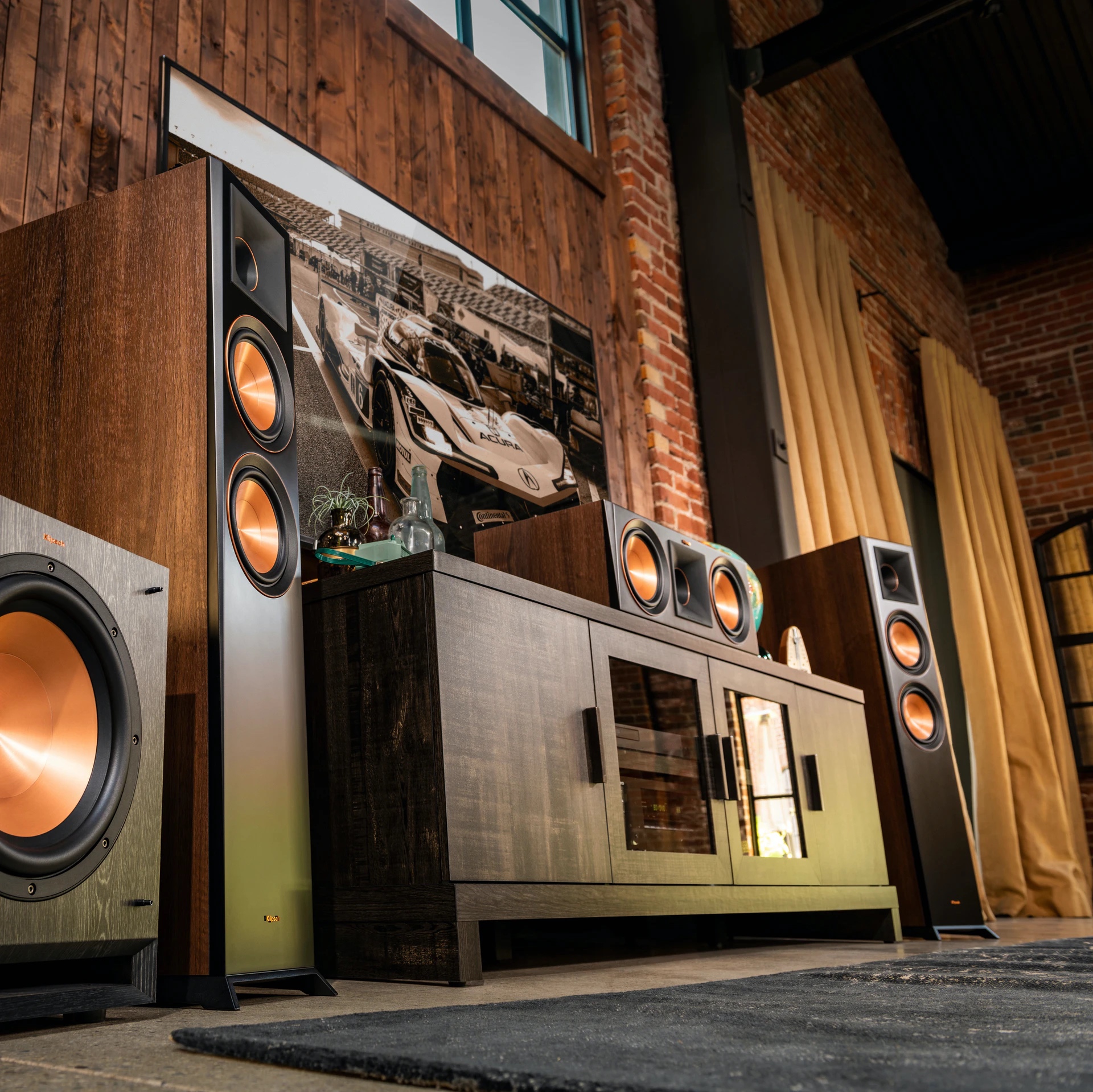 If you want the true experience of streaming music in surround sound, we recommend getting Klipsch’s Dolby Atmos Speaker bundle.

Each driver, from the 1 inch tweeters on the bookshelf speakers to the 12-inch wireless subwoofer has been designed to create crisp, well-balanced sound. You can put together your own system using components from different companies, but this bundle ensures you’ll have an excellent experience right out of the box. There’s no weak link.

Driving these speakers requires a Dolby Atmos compatible A/V receiver, and we recommend Marantz’s SR7013, which also supports IMAX enhanced audio, Auro 3D, and other versions of Dolby surround sound. You can use this receiver, plus a set of Klipsch’s Dolby Atmos Surround Sound speakers to upgrade your current home theater system.

If you have a TIDAL Hi-Fi subscription, and want to stream music in surround sound, Klipsch’s Dolby Atmos Speaker Bundle gets our highest recommendation.