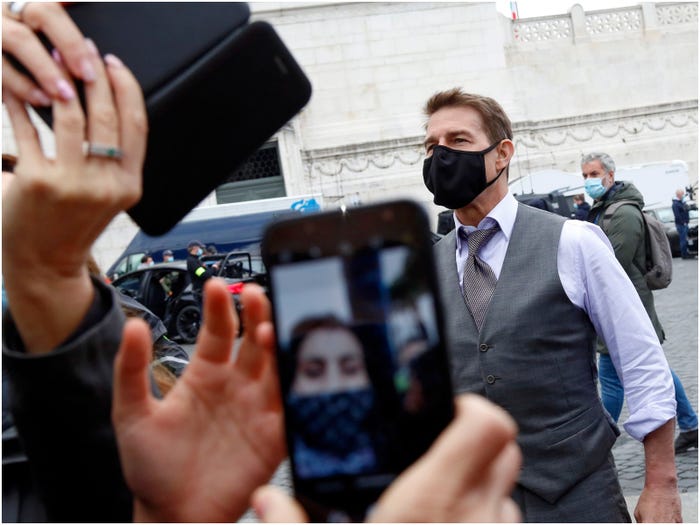 Fans are torn between praising Tom Cruise and criticizing him for his expletive-filled rant at employees on the set of "Mission: Impossible 7" after they broke COVID-19 safety rules.

Audio of Cruise's rant was released by The Sun newspaper on Tuesday, wherein Cruise can be heard shouting at people for apparently standing too close together on the film set.

Cruise threatened to fire them, and anyone else, if they broke COVID-19 safety rules again, and impressed upon them that movies are being made again now because they are the "gold standard."

"I'm on the phone with every f—ing studio at night, insurance companies, producers, and they're looking at us and using us to make their movies. We are creating thousands of jobs you motherf—ers," Cruise said.

You can listen to the full audio here.

The reaction to this leaked audio has been mixed with praise, ridicule, and scorn being given to Cruise in equal measure.

John Rocha, YouTuber and founder of The Outlaw Nation, tweeted: "THIS. IS. GODDAMN. BEAUTIFUL. I wish MORE people in charge would react like this to people who violate protocols or not wearing masks. If only more people saw the bigger picture that Tom is highlighting here. Good on @TomCruise. Thanks for setting an example on this, sir!"

Meanwhile, @BurnettRM said they'd become an even bigger Cruise fan after this audio: "I loved Tom Cruise since I first saw RISKY BUSINESS opening night in 1983. Listening to this…I love him even more now."

Dennis Tzeng, @ThinkHero, didn't want Cruise to stop at just two people: "Now he just needs to come back to America and yell at every single anti-masker."

@ItsDHANI didn't think Cruise had gone hard enough: "Those who are not following Covid guidelines are the toxic people on the planet. Gambling with everyone's life and business is not acceptable. Trust me he was soft on them. If I were him they were already gone."

However, other people didn't quite get why Cruise was being hailed for his sweary monologue, with one writing that "no one should be praising or laughing about how #TomCruise is heard behaving on that audio."

@karlbooton continued: "What it reveals is what we've known for a Long time, he's: An ego-maniac. Narcissist. Innate sense of Superiority. Controlling.. Fierce temper. Abuse of power. He sounds deranged on it."

Daily Beast's Marlow Stern even wrote a piece entitled: "Stop Praising Tom Cruise for Berating His Crew," with the tagline: "The Hollywood superstar—and leading Scientologist—was merely punching down and putting on a show."

In his piece, Stern argues that it is never acceptable to "curse out and threaten your subordinates" in the workplace and drew attention to Cruise's controversial faith in Scientology.

Back on Twitter, Tom Smith, said that Cruise's reaction was "over the top," and suggests he wouldn't have exactly been happy had Cruise spoken to him that way: "Above your station your no better than anyone else. I'd of kicked your arse back to the states if I worked with you and you talked to me like that, over the top reaction!!!! Could of just said, come on lads move away from each other, but no, massive rant."

@tilda344 also agreed that Cruise's rant needn't have been so shouty or sweary, writing that "the so called 'speech' could have been done more politely."

She continued: "I've noticed that with some celebrities, they really do think that just because they made it, they can talk to you anyhow. They get spoiled too and I think it goes into their heads."

Meanwhile, some other fans were reminded of one of Cruise's own movie characters.

In "Tropic Thunder," Cruise played a foul-mouthed producer called Les Grossman who clearly had some anger issues to work on. And it seems that some think Cruise channelled Grossman with this COVID-19 rant.

@jackjujitsu said he could "imagine Les Grossman yelling this with a diet coke in his hand."