Gigi Hadid and Zayn Malik showered their baby girl with cuddles for her first Christmas. Gigi posted two photos of their daughter to her Instagram Stories. Zayn is holding the baby in one photo and in the other, the baby is shown wearing Gucci. Wow, she’s already more stylish than I am. This year, their Christmas gift came early and she was wrapped in a sweet little onesie. 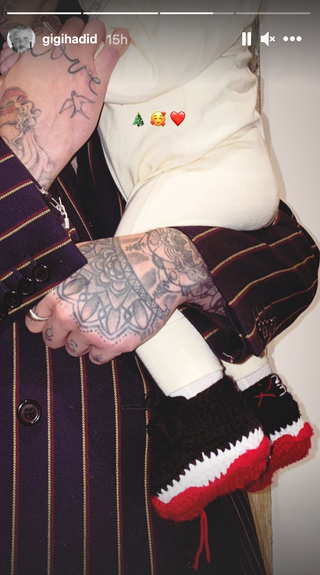 As you can see, Gigi and Zayn’s daughter was showing off her Gucci Christmas gift. I mean, when your mom is a model and your dad is an international singer, you’re gonna have a great sense of style. 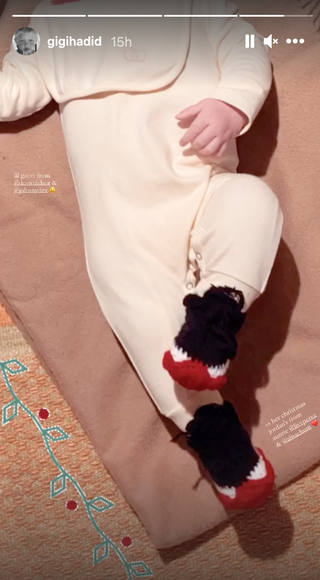 We still don’t know the name of Gigi and Zayn’s daughter. We do, however, know that her name is not Dorothea, despite Swiftie theories. Gigi and Zayn confirmed the news of the birth of their daughter September. A week before, Gigi’s father, Mohamed Hadid, accidentally made fans think she already gave birth. TMZ was the first to report the news of Gigi’s pregnancy, but it was Yolanda Hadid who revealed the sex of the baby.

Since her birth, their daughter has been hanging out at her grandma’s Pennsylvania farm and strolling the streets of New York City with her mama. A surprise NYC snowstorm gave Gigi a chance to have a little photo opp while her daughter was chillin’ in a stroller.

Gigi captioned the adorable pic, “her first snow 🤍🗽.” Gigi’s covered in a long coat and scarf and her daughter was nice and warm in the enclosed stroller.

According to a previous report from E!, Gigi and Zayn are doing well since their daughter’s birth. “Everything went smoothly and she [Gigi] is recovering at her penthouse,” a source said. Gigi is surrounded by both of their families and “is on a high and can’t believe they created an angel. She’s truly so in love and has had many emotional moments while holding her baby girl.”