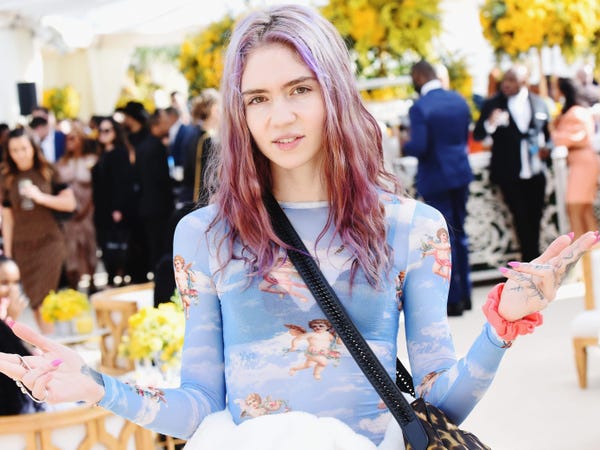 Grimes' son X AE A-XII  is on his way to becoming a film and art connoisseur at just 5 months old.

"In general, stuff for babies is really just creatively bad," she told The New York Times on Wednesday, adding that she doesn't want her son's "first introduction to the world to just be all this aimless crap."

Grimes clarified that she wasn't "insulting babies" and explained that the books, movies, and music marketed for infants is "all very one vibe" and only allows for "one very small sort of creative lens that things can be looked at through."

The first-time mother argued that babies "do have taste," saying they "definitely like some things. They don't like other things. They fully have opinions."

So, she's done away with the "pastel color tones" and taken it upon herself to expose X to more complex, mature art forms.

"I've watched 'Apocalypse Now' and stuff with my baby," she said. "He's into radical art. Like, he just actually is, and I don't think it's problematic to engage with them on that level."

Grimes has also leaned on X for input while creating a song for an app called Endel.

She told The New York Times that part of the reason she tapped on the algorithmic music startup was to figure out a more "artistic" and "better baby sleeping situation" in place of white noise machines, resulting in an "AI Lullaby" that was released on Wednesday.

"The first version, there was too many sort of sharp bells, and it caused tears and just general chaos," she said, continuing to note that after she changed things around, "X would smile more and stuff."

"I was basically personally just referencing ambient music I've heard, and then kind of trying to make it cuter," she explained of the track. "It's a bit sparklier, a bit nicer."

Musk and Grimes welcomed X, their first child together, in May 2020.

When the SpaceX and Tesla CEO announced that their child's name was X Æ A-12 Musk, Twitter erupted into a frenzy of memes and confusion over how to pronounce the unconventional moniker.

Grimes walked her followers through the significance of the name soon thereafter.

"X" is "the unknown variable," she explained, while "Æ "is "my elven spelling of Ai (love &/or Artificial intelligence)."

The artist continued, "A-12 = precursor to SR-17 (our favorite aircraft). No weapons, no defenses, just speed. Great in battle, but non-violent." (It's possible she meant the SR-71, which Musk pointed out.)

She added that the "A" came from "Archangel, my favorite song."

Several weeks later, Grimes revealed that they'd changed the baby's name to X Æ A-XII, likely as a result of a California law.

Business Insider's Avery Hartmans reported that the state's birth registration handbook said that a child's name is limited to the 26 alphabetical characters of the English language, with the exception of some punctuation in names.

And the character "Æ," which Grime and Musk included, isn't among the 26 letters of the English alphabet, nor is the number 12.

"Roman numerals. Looks better tbh," Grimes responded to one individual that commented on the name change.