Girls have been facing sexism in schools since the moment they were granted the right to receive an education. In Amy Poehler’s new Netflix movie Moxie, one shy teen gets fed up with the misogyny she and her classmates face every day and accidentally starts a feminist revolution among her peers. As fun and inspiring as the film is to watch, Moxie stars Hadley Robinson and Alycia Pascual-Peña confirm it was just as much so to make.

Based on Jennifer Mathieu’s 2017 novel of the same name, Moxie — which hit Netflix on March 3 — follows 16-year-old Vivian (Robinson), who creates an anonymous riot grrrl-inspired zine (called Moxie, duh) to expose the patriarchal B.S. at her school, calling out everything from the sexist dress code to a serious rape allegation against the star football player. On her quest for equality, she befriends outspoken feminist Lucy (Pascual-Peña) and together they spearhead a new anti-patriarchy club at their school.

Just like their onscreen characters were empowered by Moxie (the zine), Robinson and Pascual-Peña tell Elite Daily how Moxie (the film) opened their eyes as feminists and what it was like to bring the story to life.

This interview has been edited and condensed for clarity. Hadley Robinson: She’s just an incredible human. She had a true vision and came in knowing what she wanted. And then she was also a really great actress, as we all know. She does it all and I think we all learned a lot from her.

Alycia Pascual-Peña: I absolutely agree. She’s a wonder and icon, rightfully so, because she’s ridiculously talented and a genius at what she does. But then she’s also just an amazing human being. She has a beautiful heart and is a phenomenal mother to her boys and really became that type of figure to us as a cast. She became a momma to this family she created. I couldn’t imagine how amazing of an experience I would have had on set with her.

ED: Many moments in this film — from the "hot or not" list the boys send around to the school principal’s dismissal of the students’ complaints — feel so real. Were there any scenes that felt similar to your own life experiences?

HR: I think a lot of what happened in this high school happens in a lot of high schools everywhere. A lot of it happened for me in school, such as the rankings list and the unfair dress code and little microaggressions and harassment. Unfortunately, I think it’s a pretty common thing.

APP: It’s kind of eerie, the amount I can personally relate to the adversity Lucy and other characters within our film face. Whether it’s arguing with a privileged white man mansplaining because he didn’t agree with my opinion or me being sexualized or being demonized for being a radical feminist. I think it’s unfortunate that a lot of us women feel that under this patriarchy and infrastructure. Our film doesn’t shy away from having transparent conversations, but specifically says, "No, this is misogyny. This is oppressive and unjust." ED: In the film, Vivian is a fledgling feminist who makes mistakes along the way, whereas Lucy is more knowledgeable about feminism and confident in her beliefs. What lessons can viewers take away from each of these characters?

HR: All the characters in this film represent different ways to embody feminism and ways to go about being a feminist. I don’t think there’s really a wrong way as long as you’re standing up for what you believe in.

APP: We are trying to really uplift this narrative that activism and your voice is unique. It looks different for each person. No matter who you are, what you look like, you have something to contribute. You have the agency to change the world around you and hold people accountable. I think it’s really beautiful that we see a spectrum of activism within our film because being a changemaker and being an activist is unique, it’s subjective, and you shouldn’t ever have to be put into one box. I think specifically something that’s really beautiful about these girls coming together and being a united force is the fact that they grow together. They are willing to take accountability and have these conversations and grow as a collective force. There’s power in that.

ED: Did you find that Moxie’s themes of feminism and intersectionality translated to the atmosphere on set?

HR: It was incredible. Sometimes it just felt like one big sleepover party, which could become dangerous because you’re like, "Oh, it’s just fun — we’re having a good time with real women." And then you’re like, "Oh, right. I’m at work." Everybody connected with each other in a really deep, real way, and we had a lot of conversations off set that were similar to conversations we had in scenes. Amy made it a point that intersectionality was at the forefront of this film. She made sure that was a huge part of the movie and also part of the conversations we were having offset.

APP: We have such a beautiful and powerful ensemble cast, and the fact that a majority of us are women — of different races and identities and cultures and backgrounds — isn’t very common. I think it drove us in wanting to tell our stories and celebrating feminism and how it looks different and how that’s beautiful. Behind the scenes, we became a family. We learned so much from each other and it was so much fun. We were continuously dancing and scarfing down way too much food in between takes. It definitely felt like camp or a sleepover. It gave me the feelings that I wish I had experienced in high school. We all championed each other even when we weren’t in each other’s scenes. Like, you would hear us cheering each other on and being like, "How can I be there for you?" 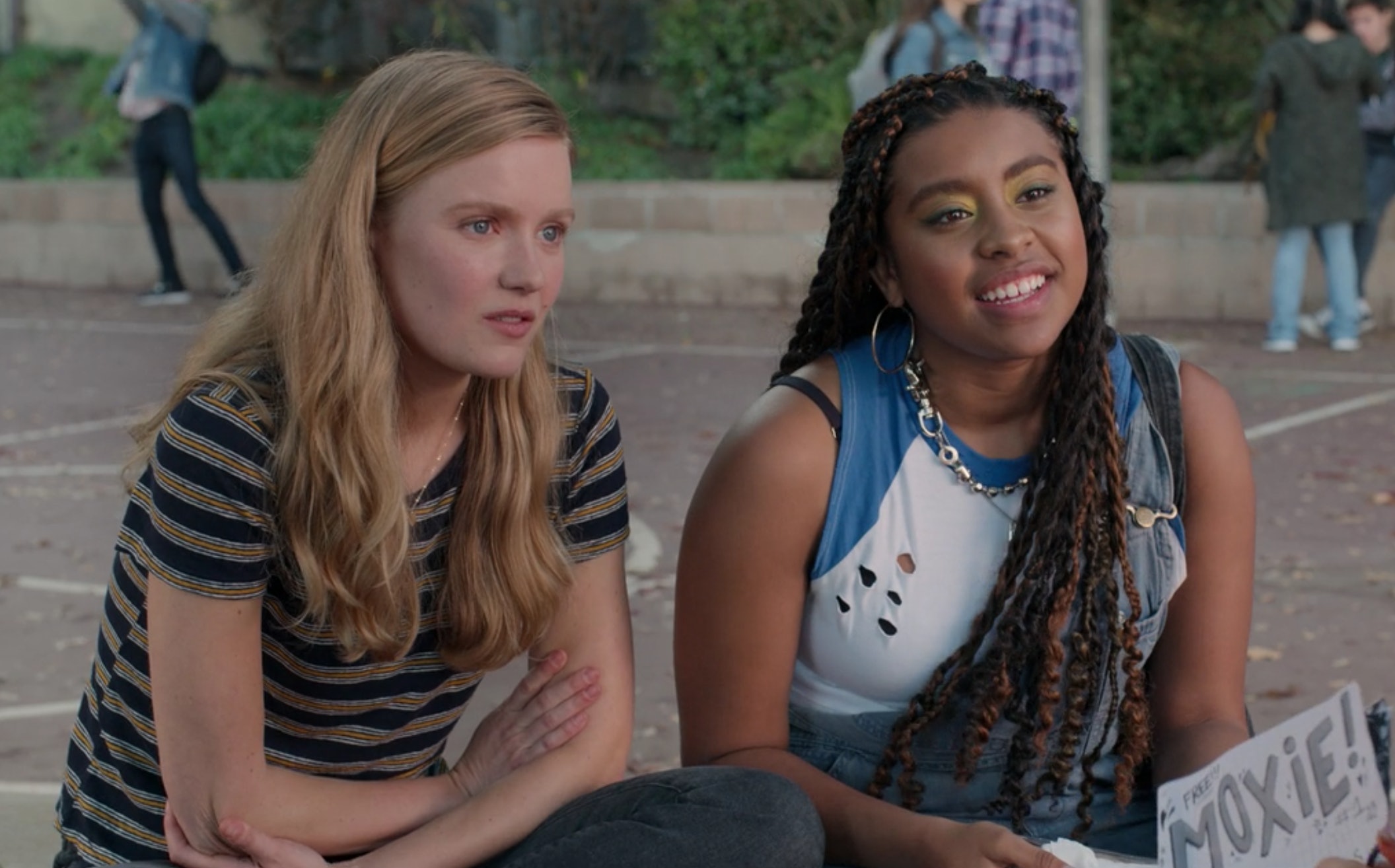 ED: Can you elaborate on some of the conversations you had behind the scenes?

HR: Before even shooting the movie, we talked through scenes and we talked about why they were important to us and why they mattered. It felt very collaborative. Mostly, people just kept reiterating how much the film means to them. A lot of people were saying how important and cathartic it was.

APP: It never felt like we were working — even though every member of this film is so professional and so talented — because we were having those vulnerable conversations and being goofy and learning about each other. We were able to have those conversations about what we had learned, and things that empower us as women, and the changes that we want to make, and how this film is going to resonate [with] and impact people.

ED: What was the most fun scene to film?

APP: Any scene where we all got to be together was so much fun, but if I had to pinpoint one favorite scene it would probably be the dance party. We just got to rock out with this amazing band called The Linda Lindas — who are a real band in real life made up of young girls — and dance for hours and headbang and have fun and say powerful words.

HR: I have to agree with Alycia. That dance party was so fun and there were several dance parties. I feel like I danced three times in this film. One alone, one with all the women at the end, and then the Linda Lindas one. A lot of dancing. ED: What’s a surprising lesson you learned from Moxie?

APP: This idea of being unapologetic in your truth. I’ve always been an outspoken woman, but a lot of times I think I’ve engaged in respectability politics to appease people around me, whether it was the way I would articulate things or not say something because I didn’t want to be deemed in a negative manner. Like, "the angry Black woman." That’s wisdom Amy bestowed upon all of us women. It was so powerful in between takes to hear her say, "Stop saying sorry" because it’s just a default for so many women, especially for myself.

Moxie is now streaming on Netflix.