HBO Max Will Release the Snyder Cut of 'Justice League'

Justice League’s release in 2017 was generally seen as a disappointment by many DC fans, and that’s partly due to the fact that the original director, Zack Snyder, had to leave the film after his daughter tragically passed away.

Since then, fans have called for the release of the “Snyder Cut,” or Snyder’s version of the film.

On November 17, 2019—which was the two-year anniversary of the movie—Justice League actors Gal Gadot and Ben Affleck showed their support for the Snyder Cut movement when they both tweeted “#ReleaseTheSnyderCut” within hours of each other.

But what exactly is the Snyder Cut?

Filming for Justice League wrapped in October 2016, and Snyder stepped down as director while the film was in post-production in May 2017. Joss Whedon, a director and screenwriter (known for shows like Buffy the Vampire Slayer and Serenity, as well as directing the first two Avengers movies)was previously hired to help write some additional scenes for the movie, then took over to finish production.

In July 2017, the film underwent two months of reshoots, and the long filming schedule cost Warner Bros. an additional $25 million. It also coincided with Henry Cavill’s mustached-role in the sixth Mission: Impossible film, which is how his Superman ended up with that awkward upper lip.

Because of the messy post-production drama and reshoots, Justice League fans have clamored to see Snyder’s cut and version of the film, sans any rewriting or additional scenes.

Will the Snyder Cut be released?

On May 20, 2020, HBO and Zack Snyder announced that the Synder cut would be exclusively released on HBO Max in 2021.

“I want to thank HBO Max and Warner Brothers for this brave gesture of supporting artists and allowing their true visions to be realized. Also a special thank you to all of those involved in the SnyderCut movement for making this a reality,” Snyder said.

Jason Momoa, who was a constant supporter of the cut, posted a congratulatory message to Synder on Instagram, writing “justice served. all my aloha to everyone who made this happen. all the fans. we love you.” In August 2019, he posted a video thanking Synder for showing him the cut.

WE WANT finally it’s happening. your welcome. justice served. all my aloha to everyone who made this happen. all the fans. we love you. ALOHA J #releasetheSnydercut @HBOmax @ZackSnyder

Henry Cavill also posted about the news: “Now, I know there have been two camps over the whole Snyder Cut thing and whether it will ever happen for a while, he wrote. “Just remember, we all get to have more Justice League now, it’s a win win.”

Just had a little chat with Zack Snyder after a man of steel watch party. Ladies and Gents, it finally happened. The Snyder cut will be out next year! Now, I know there have been two camps over the whole Snyder Cut thing and whether it will ever happen for a while. Just remember, we all get to have more Justice League now, it's a win win. So, be nice to each other ;). Big congratulations to you, Mr Snyder! #ReleaseTheSnyderCut #ZackSnyder #JL

In 2019, Kevin Smith told CinemaBlend’s ReelBlend that the Snyder cut was real, but that he also hadn’t actually seen it.

“There is a Snyder cut. For sure. That’s not a mythical beast. It exists. it’s not a finished movie by any stretch of the imagination. The Snyder Cut that, again I haven’t seen, but the one I’ve heard everyone speak of was never a finished film,” Smith said. “It was a movie that people in production could watch and fill in the blanks. It was certainly not meant for mass consumption.” 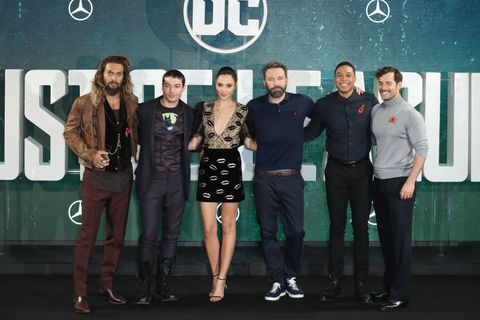 However, a Collider writer had previously claimed that he had heard that some of the team behind Justice League had called Snyder’s version “unwatchable,” and entertainment reporter Josh L. Dickey also claimed that Snyder had actually been fired months before he stepped down as director.

Snyder himself had also called for the release of his original creative vision of the movie, and he retweeted Gadot and Affleck’s tweets about his cut.

Neither can Batman. #releasethesnydercut https://t.co/3Y0FxTy5Qp

The Snyder Cut may feature Darkseid.

Basically the D.C.E.U’s version of Thanos, Darkseid (and his younger form, Uxas) was recently confirmed by Snyder to play a role in his 218-minute, unfinished cut of the film by sharing a photo of a scene. “Uxas clearing the defenders of earth from the anti-life equation  he better lookout for David Thewlis, [sic]” he wrote. It’s interesting that Snyder mentions David Thewlis, because that’s the name of the actor who played the primary antagonist, Ares, in Wonder Woman. Was there some sort of villain crossover planned in The Snyder Cut?

It was also confirmed that actor Ray Porter contributed both voice and motion capture work to the film, and he himself tweeted (in response to Snyder’s photo) that he believed his work on the film was all wrapped up.

As far as I know, all done