Having faced backlash for her transphobic comments herself, the ‘Harry Potter’ author defends the ‘I Try’ singer and the ‘Hocus Pocus’ star who are accused of being anti-trans.

AceShowbiz –J.K. Rowling has tweeted out her support for Macy Gray and Bette Midler who currently find themselves tangled in a situation the author has been dealing with for months. The famed book writer has defended the two American stars after both of them landed in hot water over their alleged transphobic comments.

On Monday, July 4, Rowling retweeted Midler’s post which read, “WOMEN OF THE WORLD! We are being stripped of our rights over our bodies, our lives and even of our name! They don’t call us ‘women’ anymore; they call us ‘birthing people’ or ‘menstruators’, and even ‘people with vaginas’!” The actress continued to urge her followers, “Don’t let them erase you! Every human on earth owes you!”

The “Harry Potter” author later shared a screenshot of Gray’s response to a trans broadcaster’s claim that the singer is going to “kill what’s left of your career” with her controversial comments. Seemingly unshaken, the R&B songstress wrote back to the journalist, “Truth hurts.” The author then captioned it, “Today feels like a good day to ensure I’ve bought @MacyGraysLife’s entire back catalogue.”

Rowling also re-tweeted Stephen Knight’s post. In the post, the podcast co-host argued, “Bette Midler and Macy Gray aren’t receiving pushback because they said something hateful or inaccurate. They are being demonized as heretics for rejecting the dogmas of a new religion. This is how blasphemy law works the digital era.” 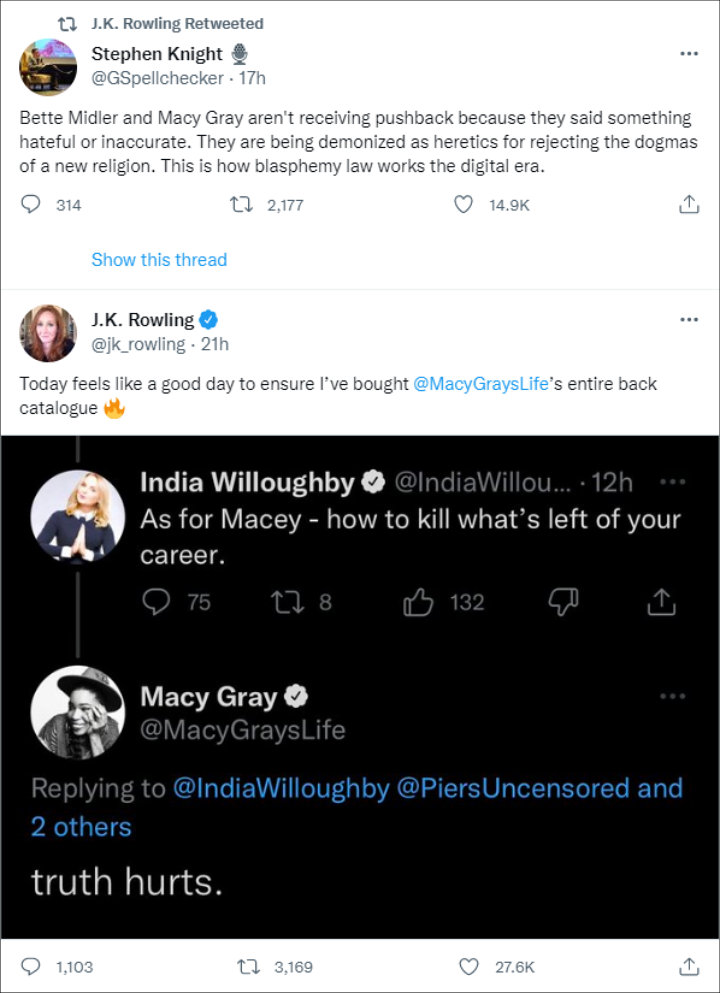 Gray, in the meantime, has defended herself against the criticism. On Tuesday, she claimed that she’s a supporter of the LGBTQ+ community and that her comments were “grossly misunderstood.”

She previously said on “Piers Morgan Uncensored”, “I will say this and everybody’s gonna hate me but – as a woman – just because you go change your parts, it doesn’t make you a woman, sorry. I know that for a fact. A woman is a human being with boobs. How about you start there? And have a vagina!”

As for Midler, she clarified that her problematic remarks were actually not about trans women. “PEOPLE OF THE WORLD! My tweet about women was a response to this fascinating and well written piece in the NYT on July 3rd. https://tinyurl.com/2p9dw2th,” she wrote. “There was no intention of anything exclusionary or transphobic in what I said; it wasn’t about that.”