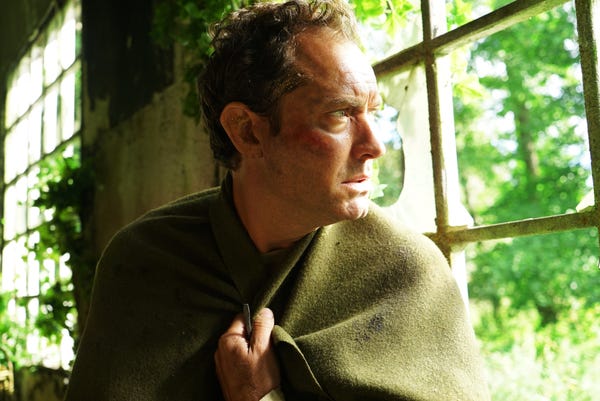 At the outset of HBO and Sky Atlantic's new splashy summer show titled "The Third Day," Sam, an out-of-depth garden center owner played by Jude Law rescues a young girl from certain death within the creepy woods of southeast England.

Determined to save this young girl from her demons, Sam drives her home to the secluded island where she lives with her odd family, only to discover that the only route off the island is a solitary causeway which has now been flooded by a rising tide that won't relent for the whole weekend.

The only option is to lodge at a weird pub and watch on as the island's small but mysterious community prepare for their yearly pagan festival.

"The Third Day" will likely be a treat for all horror fans out there as its narrative beats pull directly from classic offerings like "The Wicker Man," "Kill List," and Ari Aster's recent hit "Midsommar." However, these clear inspirations are ultimately this limited series' biggest undoing.

Why you should care: It's a new HBO/Sky Atlantic production

From gritty crime dramas like "True Detective," "The Sopranos," and "The Wire" to intelligent comedies like "Insecure" and "Curb Your Enthusiasm," for decades HBO and Sky Atlantic have solidified themselves as the home of sophisticated and original storytelling that other broadcasters, as well as film producers wouldn't dare to touch.

Simply put, the HBO and Sky Atlantic alliance has been the force behind at least one of your favorite binge-watches over the last few years. So, when a new HBO/Sky Atlantic show is premiering on a Sunday night, you know it's at least worth checking out.

Jude Law provides an interesting performance set to the electric physical intensity that has now become his trademark.

From the start, his character Sam is pushed to very extreme limits, but Law never leaves the sweet spot between passion and rage, providing audiences with an assured performance. There is a particularly accomplished sequence half-way through the first episode where Law enters a bewilderingly creepy pub and rattles off 5 minutes of brooding dialogue alongside Emily Watson, using his voice to provide the audience with some insight into the trauma he has and will potentially face as the series goes on.

It is also welcome to hear Law using his natural British accent instead of hiding under an American, Australian, or old-English twang.

What's not: We've seen all of these things done before, and better

Whilst Jude Law provides a committed and impassioned turn as our panic-stricken anti-hero within an ambitious narrative structure that breaks its theatrical arcs into three seasons: summer (led by Jude Law), winter (led by Naomi Harris), and fall (a supposed 12-hour live broadcast), "The Third Day" simply fights too hard to be both formally and stylistically experimental at every turn, while its narrative core remains deeply shallow and predictable: a lost man stuck on a creepy island, navigating a group of creepy locals, all set to the sounds of creepy synths.

There simply isn't much else going on here.

The first episode does propose some interesting philosophical questions around memory, alienation, and childhood trauma, but sadly a dull script leaves the viewer with little hope that the show will be able to carry any of these subjects through with care in the following episodes.

The Bottom Line: There are fine performances but 'The Third Day' won't be a game-changer

"The Third Day" is a relatively interesting television show with admirable ambitions to push narrative TV conventions forward. However, its inspirations and reference points are far too clear and present to provide audiences with anything new or exciting.

With both Jude Law and Naomi Harris leading the limited series we are guaranteed to witness some great acting, and since there isn't much else premiering on television at the moment we may as well indulge, but "The Third Day" is unlikely to change the way see things.

HBO's top 82 TV shows of all time, ranked from worst to best by critics

13 Emmy-nominated shows you might have missed, but should definitely watch