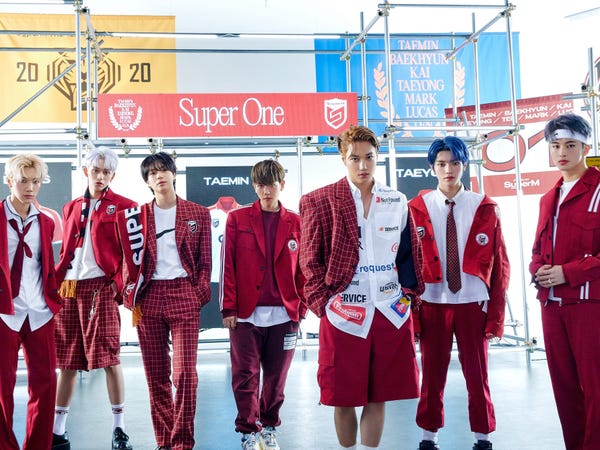 SuperM is a seven-member K-pop supergroup under SM Entertainment. The group brings together Baekhyun and Kai from EXO, Taemin from Shinee, Mark and Taeyong from NCT 127, and Ten and Lucas from WayV. Called the "Avengers of K-pop," the group's musical style brings together the member's individual musical styles.

"Super One" is SuperM's first full-length album on the heels of their chart-topping self-titled mini-album that came out last full. The album features 15 tracks including pre-release singles "100" and "Tiger Inside," but skews more towards pop. Title track "One (Monster & Infinity)" leads the album and combines album tracks "Monster" and "Infinity" in a way that's reminiscent of K-pop legends Shinee's 2012 track "Sherlock (Clue + Note)."

Taemin, a member of Shinee who is in the 12th year of his K-pop career at the age of 27, said at a press roundtable on Tuesday that this time around he "had more confidence" working on this mashed-up lead title after seeing it come to fruition with Sherlock.

The music video brings the typical SuperM-esque sense of excitement, light peril, and technological focus as the song oscillates between "Infinity's" chorus and verses from "Monster."

This album carries SuperM's message of encouragement for fans during the difficulties that loom worldwide during the pandemic.

Baekhyun told reporters at the roundtable that "we have to come together as one in order to overcome these difficult times."

SuperM hopes to bring fans together through this album. Working on their first full-length album also provided the opportunity for the artists themselves to come together as one.

"All of our members are skilled," Taemin told reporters. SuperM combines generations of K-pop talent, from Shinee, which debuted in the late 2000s to WayV which released its first Digital EP just last year. "But this album shows growth in that we came together as one."

Responses from the artists were translated by the author.