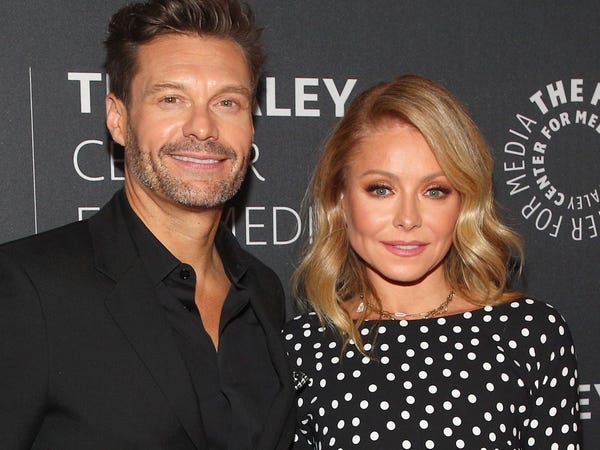 Kelly Ripa spoke to Insider about her "surreal" experience being back in the studio to film "Live With Kelly and Ryan" with cohost Ryan Seacrest after months of doing the show virtually.

"It's a little bit surreal because it's Ryan and me, and we sit at two separate desks now," Ripa, who's promoting her partnership with Persona Nutrition, told us. "It looks like we're very close to each other, but we're actually quite far apart. Neither one of us can really hear each other well."

Ripa and Seacrest returned to the studio, located in New York City, on September 8.

Similar to other shows that resumed in-person production, the crew at "Live With Kelly and Ryan" had to make some adjustments to ensure everyone's safety, like seating the cohosts six feet apart and having no studio audience.

Back in studio with new seating charts. Shout-out to everyone working behind-the-scenes to keep us safe and healthy. See you again tomorrow!

Ripa explained the challenges of filming a morning talk show while following COVID-19 protocols, saying: "Our camera people are sort of taped off from one another. It's a very surreal, unusual experience."

Regarding the lack of a studio audience, Ripa said that "it is strange," but they've been working through it.

"[The] producers that are there, they sound like 250 people. I swear they do," she told us. "They are so funny and encouraging, and they're so great to us. I always look at it like: Most of our audience doesn't see us in person anyway. It's a very rare group of people that get to come to the city and see a talk show."

She continued: "So really, very little has changed for us. We sort of do the show exactly the same way we've done it. Really the only difference is that during commercial breaks, we don't run out and talk to the audience because there is no audience to talk to."

We’re live with our staff audience 😹

Prior to the recent studio shows, Ripa and Seacrest worked remotely from their homes as they interviewed talent. Ripa said that what she learned from the experience of working from home, sans a full crew and glam squad, was that she's "very comfortable with less."

"I used to get eyelash extensions and hair extensions," the actress said. "Those are two things that have gone away. I don't do that anymore. It just seems unnecessary. And I just discovered that I am enough, if that makes any sense."

The Emmy-winning star went on to say that she's glad that she and Seacrest "have each other" and this shared experience to connect over.

She's also grateful to have an audience that's been "understanding" about the unexpected changes.

"I have the most understanding audience on the planet and they don't mind if I'm not as glamorous or if I don't have long eyelashes or if I look a little messy one day," she said.

"They're very forgiving because I think everybody can understand the strange world that we now live in. "