Kourtney Kardashian received some hate on Instagram after she referred to herself as ‘Moana of Motunui’ in a series of new bikini pics from her sister, Kim’s, 40th birthday getaway.

Kourtney Kardashian is, without a doubt, reality TV royalty, but some Instagram users were none too pleased when she likened herself to a particular Disney princess. In a series of October 27 pics, featuring the mother-of-three, 41, in a cheeky black bikini during her sister, Kim‘s, 40th birthday getaway, Kourt posed-up a storm for the camera on the tropical private island. “I am Moana of Motunui,” she captioned the carousel post, using a notable line from the film Moana.

I am Moana of Motunui.

Upon reading the caption, a number of Instagram users took to the comment section of Kourtney’s post, calling out the Keeping Up With The Kardashians star for referring to herself as the Polynesian princess. “Um… no you’re not lmao not even close,” one person said in the comment section. Another Instagram user told Kourt, “No you are not. You are White!” 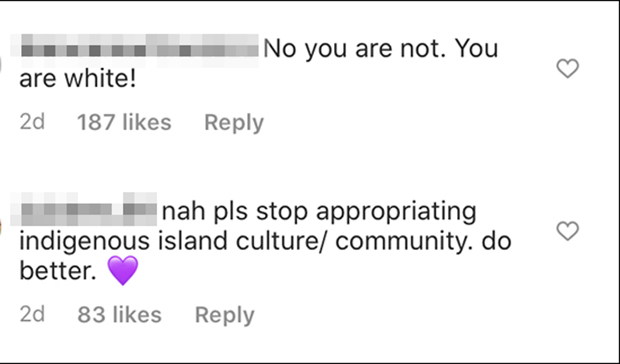 One of the most forward comments read, “nah pls stop appropriating indigenous island culture/ community do better.” While Kourt did face backlash from some over her choice of caption, others left a string of compliments. Friends and fans thought Kourtney’s bikini pics were straight “fire,” and some even called her a total “babe.” But the backlash from other Instagram users was still tough to miss.

Kourt’s caption refers to the protagonist of the 2016 animated film, Moana. The film followed the adventures of the titular character, who comes into her own and realizes her powers while coming of age in her Polynesian village. The film is beloved by audiences, and with three kiddos under the age of 11, it’s no wonder Kourt might have felt that her innocent caption was perfect for her post.

But this latest backlash comes after a number of people gave her sister, Kim, the meme treatment after she posted images of herself and close family and friends enjoying their trip for Kim’s 40th birthday. Twitter users likened Kim’s private island getaway to Lost, Shutter Island and even the interactive game “Animal Crossing!” Despite the backlash, Kim and Kourtney’s sister, Khloe, shared that the trip was “beautiful” and that everyone was safe.

“This year is a frustrating year, I get it,” Khloe admitted during her October 29 appearance on The Ellen DeGeneres Show. “There’s so many frustrations for everybody, but also….this is her 40th. And this is something she really wanted to do for us. And being there with all the precautions we took and how grateful everyone was for the tourism aspect of it….so many people said we were their first party or guests that they’ve had in months and it’s helped them pay their bills and do stuff for their families. We felt really good.”