Kourtney Kardashian is always making a statement on Instagram. Usually, it’s for her gorgeous, red-carpet ready looks, but on Monday, Nov. 30, she had fans talking for another reason: Her latest social media post may shade Scott Disick. Although Kourtney Kardashian’s Instagram about an ex didn’t mention anyone specific, fans think it’s totally about the reality star. Once you see it for yourself, you might be convinced, too.

Kardashian and Disick were together for nine years before they split in 2015. Despite their breakup, the stars remain close. Not only because they share three children — Mason, Penelope, and Reign — but they work together on Keeping Up With the Kardashians. The pair definitely seems to be good friends because they frequently troll each other online, go on vacation together (sometimes with their significant others of the moment), and celebrate each other’s personal milestones. Since their relationship has been so public, fans think they’re always referencing each other when talking about their exes.

That’s exactly what happened when Kardashian shared a cryptic quote about love and pesky exes on her IG Story. The star, who is the founder of the health and fitness platform Poosh, reposted the quote from her site’s official IG account. "Sometimes the universe will send an ex back into your life just to see if you are still a stupid heaux," the post read, which Kardashian captioned with three flushed-face emojis. Her reaction seemed to indicate she was guilty of doing just that. 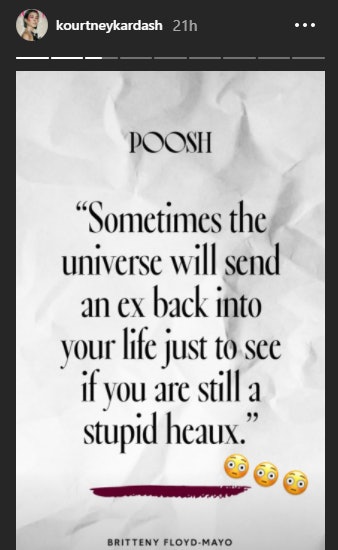 Her post comes amid rumors Kardashian and Disick may be getting back together. Shortly after the post spread, fans thought those rumors could end up being true.

"Kourtney and Scott are soulmates, but they have been blind [to it] for a long time," a fan tweeted.

"Rewatching early seasons of kuwtk so I can still live in a world where Kourtney Kardashian and Scott Disick are together," a fan also wrote.

There’s also the possibility the post could be about her ex Younes Bendjima, who she dated on and off from October 2016 to August 2018.

Sure, Keeping Up the Kardashians may be ending in 2021, but clearly fans will continue to tune in for all the drama on Kourtney and the rest of the Kardashians’ social media pages for years to come.