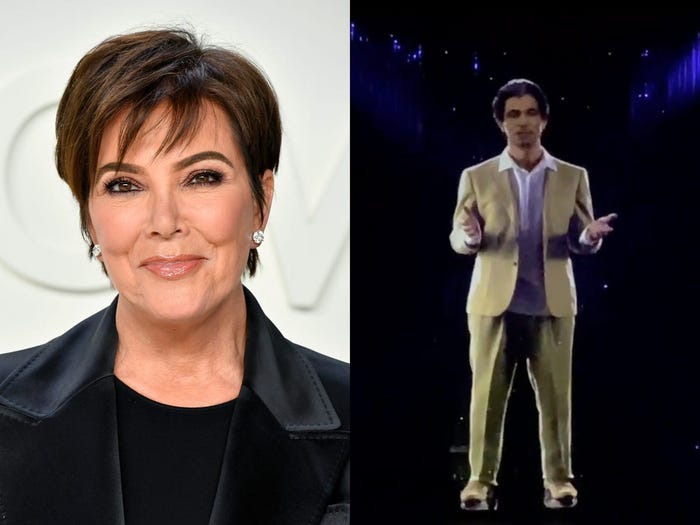 "Keeping Up with the Kardashians" matriarch Kris Jenner is no stranger to outlandish events and gifts, but she said in a recent interview that watching a hologram of her late ex-husband Robert Kardashian was an "intense" and "emotional" experience.

According to Jenner, she was "summoned" to a dark room along with her children — Kourtney Kardashian, Kim Kardashian West, Khloé Kardashian, and Rob Kardashian. The family was then told that Kardashian West's husband, Kanye West, had a gift he wanted to show her.

"We didn't really know what was happening because it was such a small group of Kim's inner circle, just our family and a few friends," Jenner told Andy Cohen on Monday's episode of his SiriusXM radio show, "Andy Cohen Live."

"They started [to play the hologram], and we just all started to cry," Jenner said. "It was, you know intense, but I looked at, watched it 20 times. It was just, it was really good."

"It was very quiet and we were all in tears and all you could hear was each other crying. It was, it was really, really emotional," she added.

The reality star admitted she had to go back to her room afterward to "digest" the experience. "It was, it was intense and it was a beautiful, beautiful moment. So I just wanted to kind of enjoy that," Jenner said.

Jenner, who called West "the king of gifts," said the rapper had worked on the hologram "for a really long time."

In the past, West has given his wife extravagant gifts, including a room full of a thousand red roses for Valentine's Day in 2014, and thousands of dollars worth of stocks for Christmas in 2017. West even gave Kardashian West a check for a million dollars — along with some Yeezy stock — for Mother's Day in 2018.

The momager also told Cohen that the family wasn't bothered by the backlash Kardashian West faced after posting a video of the hologram Thursday. Numerous people on Twitter began to make fun of the high-profile couple.

"We've learned a long time ago to have thick skin," Jenner said.

Plenty of people took issue with the fact that West seemingly used the hologram of Kardashian as a way to compliment himself. Others criticized Kardashian West's decision to share the hologram during a time when millions of people are struggling financially and separated from their families during the coronavirus pandemic.

And a whole subset of people took the opportunity to make memes inspired by West's unique gift.

Jenner is right; the family is no stranger to backlash.

The Kardashian-Jenners were also the subject of ridicule on social media after Kendall hosted a birthday party that appeared to have few precautions in place to combat the spread of coronavirus.

But Jenner defended her daughter's party on the same episode of "Andy Cohen Live," telling Cohen, "All we can do is live our lives the best way we know how and be responsible and do the right thing."