Actor Luke Evans definitely wasn’t part of the quarantine 15 weight gain club. The Alienist star instead spent the last eight months getting insanely ripped. On Mar. 19, he showed off side by side shirtless photos to his Instagram showing how he looked in June 2020 versus how cut his body appeared in Feb. 2021. Luke, 41, didn’t need to lose any weight before his body makeover, but he didn’t have nearly as much muscle definition. Now he’s so cut that even super yoked stars like Dwayne ‘The Rock’ Johnson and the Baywatch fit Zac Efron would be impressed.

Luke previously had a bit of a dad bod when it came to his torso and abs. Now fans can literally count the rows of his six-pack, which are framed on either side by super cut oblique muscles. Luke’s pecs are totally bulging, and he also made sure his arms measured up to his torso. The Furious 7 star now has great big biceps, firm delts and even his forearms have muscle definition.

Unfortunately, Luke didn’t give fans any tips on his journey to becoming so buff. He’s just letting the before and after photos speak for themselves. “8 months of work but I got there. June 2020 – February 2021. I won’t bother putting statistics as the judges will only judge. #fbf #nearly42,” he wrote in the caption of the before and after photos. Luke turns 42 on April 15, as he referenced in his hashtag, and he’s never looked sexier! 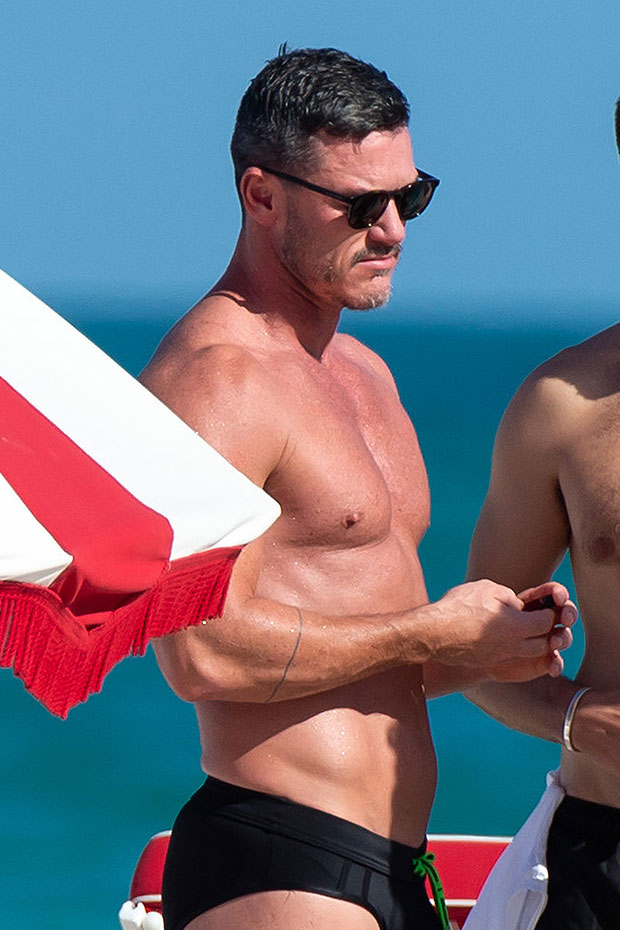 Luke had been showing fans what amazing shape he’s in via Instagram photos, but the side by side makeover is what really made people take notice of how drastically his body had changed. In a Mar. 11 IG snap, he showed off his ripped shirtless body while working out with an exercise band, writing, “Home gym training is so great…” with thumbs down emojis noting he was not enthused by being unable to train in a proper fitness facility.

Luke shared with fans how he had been spending lockdown focused on getting a new body as far back as a July 27, 2020 selfie, showing him shirtless on the ground with patterned carpet on the floor and weights around him. “Seven down. 7 to go… #quaratinelife,” he noted about the reps he was doing. In a June 22 photo, Luke was seen in a London gym, albeit wearing a black shirt with cutoff sleeves so his body at the time wasn’t visible. “Back at it…#mondaymotivation #gym #monday,” he told fans. Eight months later, that level of dedication has paid off big time.