Home » Celebrities » Madonna, 62, Sits On BF Ahlamalik Williams’ Lap In Rare Clip With All 6 Of Her Kids — Watch

Madonna, 62, Sits On BF Ahlamalik Williams’ Lap In Rare Clip With All 6 Of Her Kids — Watch

Madonna had a blessed Thanksgiving with her six children and 26-year-old BF Ahlamalik Williams. She sat on the dancer’s lap during her family’s holiday gathering.

Madonna‘s six children are pretty used to their mom’s taste in young boyfriends by now. The 62-year-old been with 26-year-old dancer/choreographer Ahlamalik Williams since the summer of 2019, and the romance is still going strong. He was there with his pop superstar girlfriend and her six children as they celebrated Thanksgiving 2020 together. The “Ray of Light” singer shared a rare Instagram video with all six of her kids, who were dressed up for the holiday. After posing as a family unit, Madonna was then seen sitting on Ahlamalik’s lap, putting her arms around her boy toy as her two youngest daughters stood nearby.

After the video of Madonna and her children posing together, it cut to Madge sitting on Ahlamalik’s lap, as he was seen casually dressed in a white t-shirt and pants, while her kids were all dressed up for the Thanksgiving holiday. David was shown strumming a guitar nearby, as Estere and Stella stood close to Madonna and Ahlamalik, who had a black and white doggie on his lap as well. 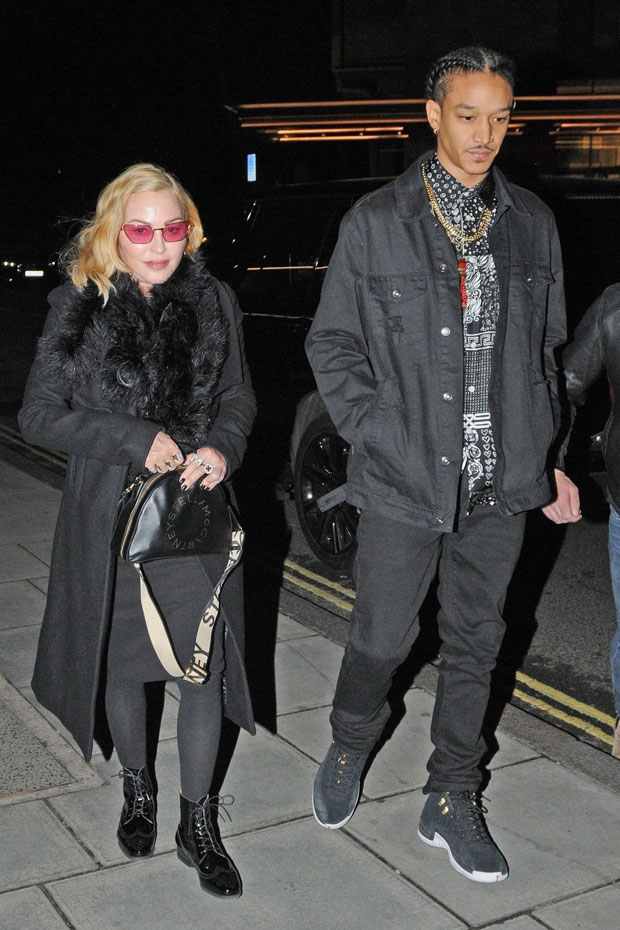 Ahlamalik had his arm around his girlfriend’s hip, as Madonna looked gorgeous in a body-hugging gunmetal grey satin dress with short sleeves, a long skirt and a chic collar. The pop queen’s normally blonde hair has been dyed pink for some time now, and she wore it straightened and shoulder-length.

Even though Ahlamalik is only two years older than Madonna’s eldest child, he’s been part of her life for some time now. He was a member of the Material Girl’s Rebel Heart tour in 2015, and appeared in a documentary about the tour the following year. The pair were first believed to have become at item around the time Madonna posted Instagram photos alongside Ahlamalik in the summer of 2019. They officially came out as couple when he accompanied Madonna and her kids on a private island vacation over New Years 2020. Now that the year is coming to a close, he’s right there with Madonna as part of her family once again.