V.P. Mike Pence has revealed Space Force soldiers will be called ‘Guardians.’ Now the name is getting dragged as it’s also the handle for the theocracy police in ‘The Handmaid’s Tale.’

President Donald Trump‘s “Space Force” can’t catch a break when it comes to getting called out for ripping off creative entities. First the official symbol was dragged as being nearly identical to that of Starfleet Command from the 1960s sci-fi classic tv show Star Trek. Now the name of members of the Space Force is getting blasted for a much more sinister reason. “Guardians”  — which employees will be known as — is the name of the fascist religious militia in Margaret Atwood‘s 1985 novel The Handmaid’s Tale and the subsequent Hulu TV series, about fertile women enslaved and forced bear children for barren rich women amid a brutal police theocracy. 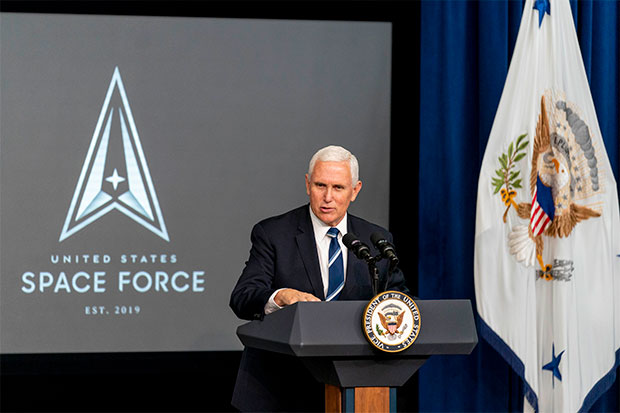 It was made worse by the face that Vice President Mike Pence — who is deeply religious and strongly against abortion and a woman’s right to reproductive decisions — made the announcement in a Dec. 18 ceremony. As a result of the “Guardians” being the new name of Space Force employees, Handmaid’s Tale rocketed to becoming one of the top trending U.S. Twitter topics.

User @EWittekind tweeted, “I know a lot of people are making fun of this for seeming straight out of a Marvel comic book franchise, but from this administration, my first thought was Handmaid’s Tale,” while @eshap wrote, “The use of the name of the fascist militia in The Handmaid’s Tale is not an accident,” and added a take on the infamous line from Handmaids “Illegitimi non carborundum,” meaning in mock Latin “Don’t let the bastards grind you down.”

Some users posted photos from the Hulu series of the Guardians in action, with @passivelurker doing just that and pointing out, “It’s literally what the theocracy thugs are called in ‘A Handmaid’s Tale.’” User @semperdiced tweeted, “‘Guardians’ are also the police and guards in the Handmaid’s Tale.”

After the war on women’s reproductive rights under the Trump administration, user @Smorgasboredom observed, “The defining feature of the last four years is that every time The Handmaid’s Tale is trending you have to stop your whole day and see if it’s a new season or if they’re doing it for real.”

Another person feared that the selected name Guardians had sinister meaning, as @ActonBell12 wrote, “In politics there are NO coincidences.WE KNOW WHY YOU SELECTED THE NAME OF THE ENFORCERS IN, ‘THE HANDMAID’S TALE.’ Your 1% masters despise women as you do apparently,” then added “Under HIS Eye” which is how Handmaids formally say goodbye to each other in person on the Hulu series.  Concerned folks should keep telling themselves it is only 33 more days until President-Elect Joe Biden is sworn in and hopefully these kinds of worries will abate. He’s so  pro-women’s rights that he selected Kamala Harris as his running mate, who will now become the nation’s first woman to serve in the position of vice president.